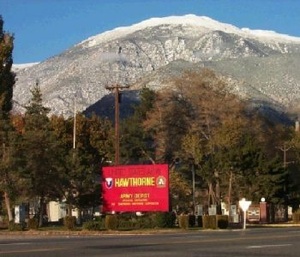 Hawthorne Army Depot is a U.S. Army munitions depot located near Hawthorne Nevada.  The entire depot covers a total of 147,000 acres  (229.7 miles) and spans most of the desert valley and mountains surrounding Hawthorne.  The facility is primarily used for storage of high explosive ordinance and other military equipment, but is also involved in demilitarization of ammunition and explosives for reuse and recycling.  The Hawthorne Army Depot is advertised as "the largest depot in the world".

The Hawthorn Army Depot was first constructed as the Naval Ammunition Depot Hawthorne.  construction started in July, 1928 and finished in September, 1930.  The original facility consisted of 17 buildings, officer and civilian housing, 84 igloo type explosive magazines, two detonator magazines, a boiler house and utility buildings spread around the site.  at the end of construction there would be a total of 120 buildings in and around the main facility and spread all throughout the valley.

The plans first started after a terrible explosion at the Lake Denmark Naval Ammunition Depot, New Jersey killed 21 people and seriously injured 53 others.  This incident cost the Navy 84 million dollars and inciting a full Congressional investigation into the cause of the explosion and what actions should be taken to avoid another.  So it was decided by the military command at the time to construct a state-of-the-art munitions depot to ensure that a tragedy like that would never happen again.  Hawthorne was picked out of other possible sites for its close proximity to Walker Lake, so that the explosives could be stored under water.  this idea was later scrapped, but the location still had enough merit for its isolated location, defensible position, and access to water. 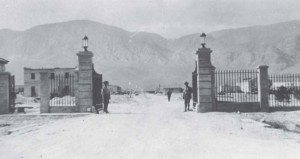 Guards stand at the Main Gate entrance of the now Hawthorne Army Depot in this undated photo.

For the first few years the depot went largely unused, until the outbreak of war in Europe.  During World War II the Naval Ammunition Depot Hawthorne became the premier staging area for the entire Pacific Front, maneuvering rockets, bombs and ammunition for the war effort.  This amount of work required a major increase in labor and nearly 6000 people worked in and around the depot during the war.  this, of course, could not last and by the end of the war many of the new residence left as quickly as they had arrived.  the Naval Ammunition Depot Hawthorne would not see activity like this again, with the Korean war and Vietnam war only seeing a comparatively smaller increase in activity.

on October 1st, 1977 the Naval Ammunition Depot Hawthorne was turned over from U.S. Navy control to U.S. Army control and was officially renamed the Hawthorne Army Ammunition Plant.  this did not last long however as just three years later, in 1980, the depot was redesignated as a government-owned, contractor-operated facility.  the first contract was given to Day & Zimmerman/Basil Corporation Joint Venture, but would later change hands to SOC, LLC.  in 1994 the depot would have its name changed to what it is currently known as, Hawthorne Army Depot.

In more recent history, a terrible accident occurred at the Hawthorne Army Depot in 2013 that lead to the deaths of 8 US Marines and wounding several others.  The incident happened during mountain training exercises when a mortar exploded inside of its firing tube.  An investigation quickly began to determine the cause of the accident.  In a stark reminder of the dangers present even in non-combat training, it was determined that it was human error that caused the explosion.

Besides storing and securing munitions the base is primarily used to demilitarize ammunition and explosives, and is what takes up most of the day-to-day activity of the depot.

In resent years the depot has been used by various different organizations.  The Air Force Detachment came to the depot to train troops in various forms of warfare.  The U.S. Marine Corps Programs Department manages a 49,000-acre live fire ordnance test facility on the depots grounds.  Though no longer in operation, the High Desert Special Operations School used to train troops to fight terrorism.

The future of the Hawthorne Army Depot might not last long.  In 2005, the Department of Defense recommended closing the depot, siting infrastructure problems that made it difficult to offload its stored munitions.  The initial cost of decommissioning the depot has been estimated to be at $180.3 million, with an estimated savings of $777.7 million over a 20 year period after closure.  This would also allow the Department of Defense to decentralize the storage of munitions to multiple sites, creating a deployment network that is focused on readiness and accessibility, while limiting redundancy.  Obviously, this was never done and the depot remained open, but the contract for operations of the base are always reviewed after several years and the decision to keep the depot open will likely be brought up again at some point.