"The Battle of Great Bridge on December 9, 1775 played a critical role in the Revolutionary War and the subsequent creation of our great nation. It was this Patriot victory that forced Lord Dunmore, British Royal Governor of Virginia, and his soldiers to evacuate and ultimately leave Virginia. As a direct result of this victory, four days after this crucial battle, the Virginia Convention adopted the first public declaration expressing a spirit of independence. How different our country might be had it not been for the Battle of Great Bridge and the significant contributions of our waterways. Patriots and British soldiers faced each other for eleven days and skirmished amid constant cannon fire before the climactic Battle of Great Bridge that lasted but a half-hour.

But, in that short time, patriotic volunteers showed that they could stand up to cannon fire and route a unit of the best professional soldiers in the world. Patriot soldiers poured heavy fire into the British Redcoats who marched relentlessly forward, wavered, and then came on again. Reinforcements joined Patriots in the breastwork and were ordered to withhold their fire until the British were within 50 yards. This was the first Patriot victory of the Revolutionary War. In winning the battle of Great Bridge on December 9, 1775, the Patriots effectively denied to the British Norfolk, the finest sea port between New York and Charleston.

It is historically significant to note that last among the Patriots to retreat was Billy Flora, a freed black slave. Before retreating into the Patriot breastwork, he ran back to take up a plank of the bridge amid a shower of musket balls to slow the British advance." -Great Bridge Battlefield and Waterways History Foundation

Directly taken from the Great Bridge Battlefield and Waterways History above, the patriots were able to push the British constituents out of this part of Virginia and led to much larger results later on in History. This wasn't necessarily the entire Revolutionary war won in one battle but it was a win none the less and this gave the patriots more freedom to move around in their hometown area. 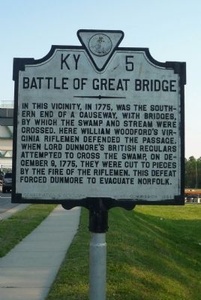 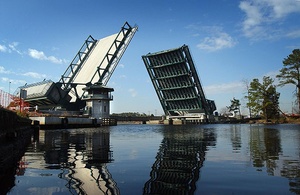 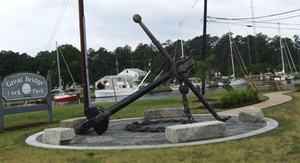 Each year there are historical reenactments by the local actors here in Chesapeake that will demonstrate how parts of the battle went on. The links down below can help in finding the next time this will happen and for more travel information regarding this battle.

Now, the Great Bridge Bridge is located on South Battlefield Boulevard and can be crossed at any time of day, unless it is open. There is a walkway for anyone on foot and the landmark with more readings is right next to it (with parking). Another fun part of this area is the locke park along with the possibility of fishing. Since these are located on the Elizabeth River and right next to the Locke, many local citizens will go out for half a day and fish or take their sailboats down the river and this is actually what will open the bridge. Although traffic can be a problem, there are many eateries around the area and located on Battlefield Boulevard.

We hope to see you there!