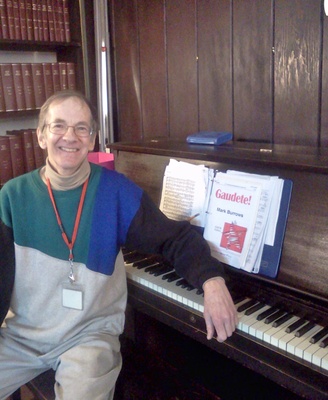 Many people know Tom as the cheerful and talented pianist who helps with the school music programs and who served as organist at the First Presbyterian Church for 20 years.

You might not know Tom’s interesting link to local history which involves author Robert Louis Stevenson, who came to Saranac Lake for his health in 1887.

Tom's parents met at a TB sanatorium in New Jersey and settled in Saranac Lake shortly after having baby Tom. Tom’s grandparents also settled here and became the caretakers of the Stevenson Cottage.

The cottage is now operated by Tom’s brother, Mike, and is open as a museum boasting of the world’s most extensive collection of Stevenson memorabilia.