Ideal Opportunity To Combine All Parties

The city will never see such an opportunity. How often:

The opportunity must not be lost to combine all parties for the greater good of the football clubs and the community to create economic growth. A newly opened rapid-transit rail line on the Merseyrail metro opened to passengers may serve:

One Metro Rail Line Solves all in One Swoop

Bringing on-line just one rapid-transit rail line solves so much in one clear swoop.

Football Clubs are Key in Opening a Viable Line

The viability to open lines to passengers is that the two large football clubs can attract approximately four million passenger trips per year for football traffic alone. Usage by the community and further events at the stadia will further increase passenger trips.

The nusisance value of stadia is vastly reduced moving most fans by rapid transit.

Pollution is vastly reduced with millions of vehicles journey's taken off the roads over a year. Collectively over a year the CO2 reduction is highly significant if rapid-transit served Everton FC, Liverpool FC, the Kings Dock Arena and Greater Liverpool.

The walk-up fans, non-season ticket holder fans, who walk up on the day are a significant percentage of football match attendances. These maybe fans who do not attend all matches in a season and decide on the day to attend. This maybe a father and his young boy.

Catering for this financially significant section of fans makes financial sense to a football club. Unfortunately this section is largely ignored over season ticket holders. Giving easy access for walk-ups to access the stadium using rapid-transit rail increases the likelihood of a walk-up fan to attend a football match. These fans would increase revenue on the rapid-transit metro supporting its viability.

The are two available lines that can be easily used and merged into Merseyrail:

This is the superior line of choice, with more useful connections and capable of handling simultaneous events at the Arena and a football stadium.

Reusing the the mothballed eastern section of the Outer Loop Line can form a total loop of the city when connected to the Merseyrail Northern line at Hunts Cross in the south of the city and branched into the Kirkby branch of the Northern line in the north end of the city. The Loop Line can serve Everton FC, Liverpool FC and the Kings Dock Arena by recommissioning St. James station at Parliament Street. 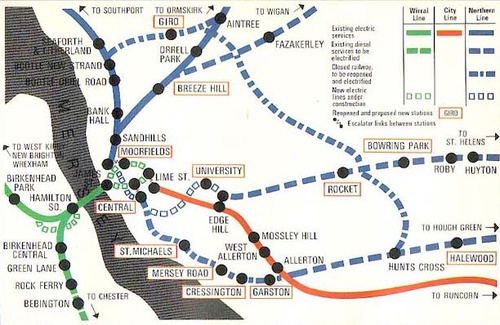 The original 1970s Plan for Merseyrail - The disused eastern section Outer Loop line is from Hunts Cross to Aintree Having both stadia on the line gives superb connectivity to mainline stations and two routes into the city centre with interchange connections to other lines. An advantage is that if there is a hold up on the line, trains can still be used around the loop. 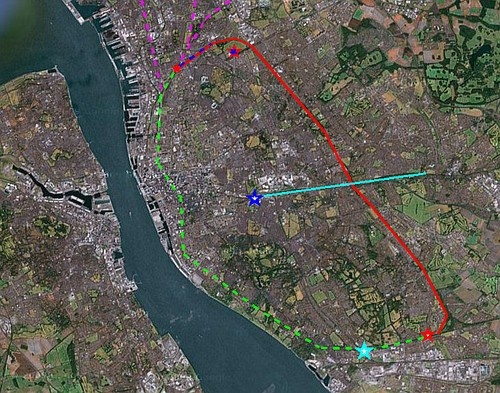 The Outer Loop line is in red. The Northern Line is green dotted. The light blue line is the soon to be electrified City Line into Lime Street mainline station. Liverpool South Parkway is the light blue star and the red and blue star Walton Hall Park.

This site was suggested by the city council to both football clubs. The site is in the north end of the city near to where the Outer Loop can branch into the Kirkby branch of the Northern Line.

This site is on the eastern side of Walton Hall Park, not far from the existing homes of Everton FC and Liverpool FC. Unlike Stanley Park, the park is not listed. Sainsbury's produced a proposal for a stadium on this site in order to partner with Everton FC.

This site is near East Prescot Road with good trunk road and motorway access.

This site is near the orbital Queens Drive trunk road and the M62 motorway junction. The soon to be electrified St.Helens, Wigan and Manchester lines run nearby as does the eastern section of Outer Loop line

Districts Served by the Eastern Section of the Outer Loop Line

Many city districts are served by the eastern section of the Outer Loop. Bringing these districts onto the Merseyrail metro will create economic growth, encourage investment and improve the quality of life for the people in these districts.

This line is freight only running from Edge Hill to Bootle. The line is earmarked for electrification. The line runs not far from the proposed Liverpool FC stadium at Anfield. Everton FC have been directed to assess the Green Lane/Prescot Road potential stadium site marked at the bottom right of the Canada Dock Dock Branch map.

The Line can serve both clubs and the residents of a number of districts. As track is already on the line, conversion to passenger usage promises to be cost effective. Interchanges with Merseyrail are at Bootle Oriel Road and Lime Street. The line runs under the Merseyrail Northern Line station at Kirkdale station with no platforms in place. Installing platforms at this key interchange station is not a great undertaking.

The line has potential to run from: 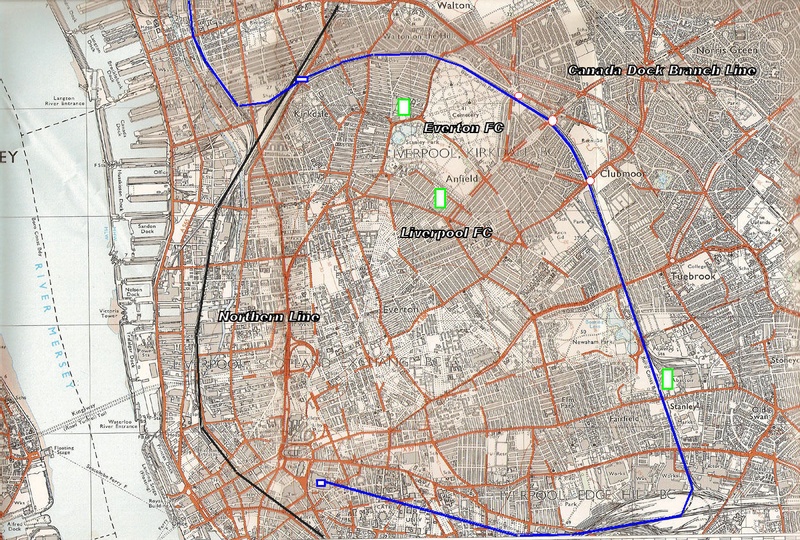 The Canada Dock Branch Line. The Green and white rectangle at the bottom right is a proposed stadium site at Green Lane/Prescot Road. The three red and white circles are the three proposed station sites for Liverpool FC's new stadium, which may be next to the existing stadium at Anfield

In time the Canada Dock Branch Line may extend into the city centre at Central station. The reuse of the 1829 Wapping Tunnel with some short branch tunnelling, would take the line from Edge Hill into Central station, fully merging with the Merseyrail metro.

The Wapping Tunnel's portal is at King Dock opposite the Arena, serving a well attended 10,000 seater venue.

The line could extend to Wirral using the tunnel. This would ensure football fans in the Wirral would have direct access to the football stadia and fans access the city centre without a change. The greater Liverpool community would also greatly benefit if these lines were in place. 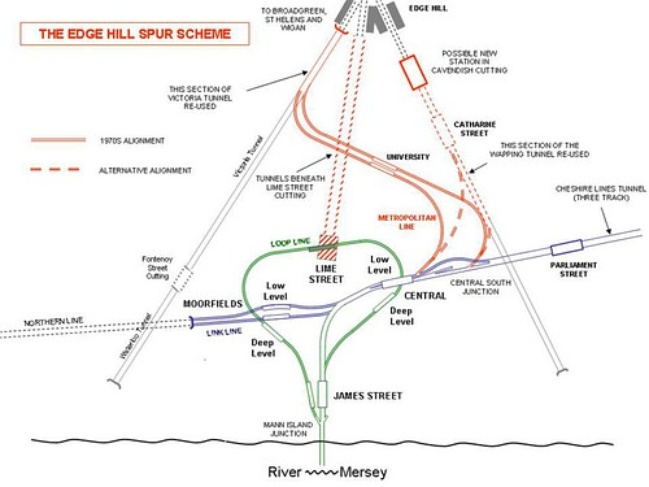 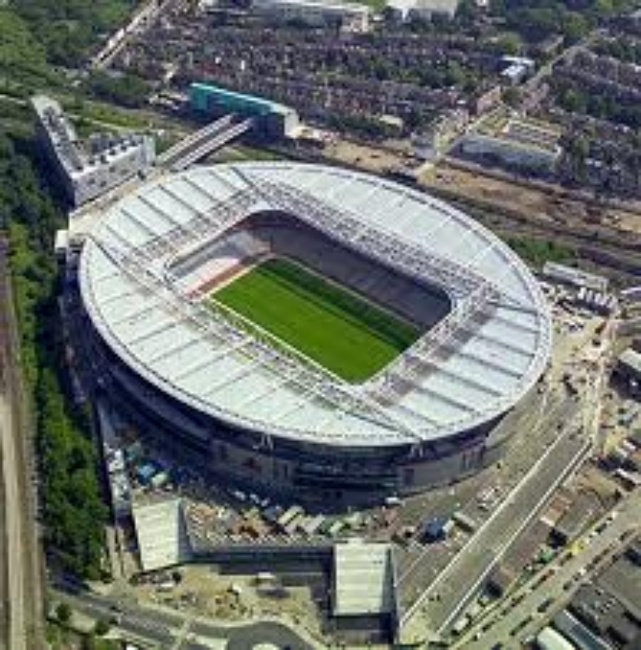 The success of Arsenal FC, a club the size of Everton FC when at their old Highbury ground with a ground very similar to Everton's Goodison Park and similar sized fanbase focuses the mind to the key of a successful new stadium.

The Emirates stadium's site was selected because of the adjacent rail lines. £7.6 million had been set aside by the planning permission for upgrading adjacent Drayton Park and Holloway Road rapid-transit rail stations. However, Transport for London decided not to upgrade either station, in favour of improvement works at the interchanges at the nearby Highbury & Islington and Finsbury Park stations, both of which are served by London Underground lines and First Capital Connect services.

With fans arriving mainly by rapid-transit rail, there is minimal nuisance to the surrounding residents. Many thousands of car journey's are kept off the roads of London per year.

The club's 60,000-seat venue already generates £3.1 million every game, making Arsenal the world game's highest earners in terms of match-day revenue and such is the success of their business model the loan for the stadium will be paid off in December 2010, four and half years after the stadium opened in August 2006.

The club is considering extending the stadium to 70,000 seats. The key to the stadium success, the existing rapid-transit rail infrastructure, can cope. 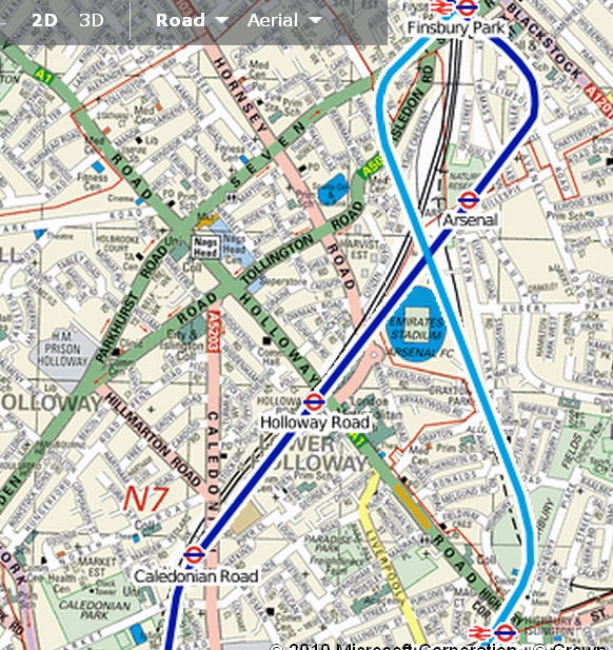 The availability of rapid-transit rail around the stadium site enabled Arsenal FC to build the stadium alone without a major business partner. The projected high attendances enabled the club to repay the loans without a partner.

This approach would entail Everton FC dispensing with the likes of supermarket companies as a business partners.

Once a business plan is put forward, with projections, financiers would be in a position to lend. Premier League football has not shown a decline since the Credit Crunch. Far from it. If anything it is a surefire winner financing a large Premiership club in infrastructure.

To a financier, the club does not need to win silver trophies, just compete at the top and earn enough to pay back the loans. The longevity of top Premier football clubs ensures the business is unlikely to fold with repayment assured in the long term. 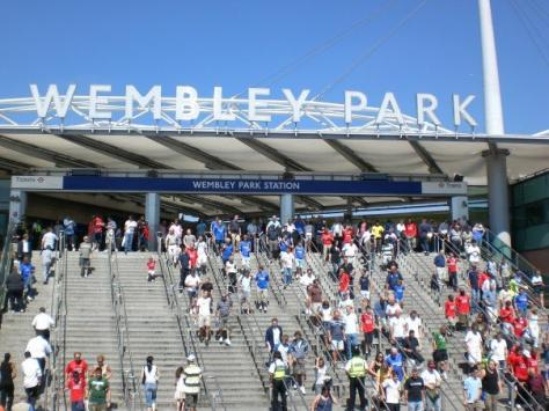 With 27 platforms in the stations surrounding the Emirates stadium success of the stadium is guaranteed. Wembley Park station with only four platforms can move over 37,5000 people per hour.

Having Everton FC and Liverpool FC on the same rapid-transit rail line with only 4 platform stations adjacent to their stadia will ensure over half of the stadia capacity is moved by rapid-transit rail. Six platforms raises the throughput to 50,000 per hour. Building modern multi-platform stations is cost effective using pre-cast concrete forms as the construction method.

The rapid-transit network can cope with two major sports events being staged simultaneously in the city. A rugby league game at AAMI Park with 30,000 supporters attending and Australian Rules events at the MCG also with a 30,000-plus crowd is common. Arrival and dispersal to and from the stadia is efficient. Trains leave every couple of minutes to all points on the City Loop with trams and taxis servicing the local districts from the stations.

Stanley Park Stadium too small Liverpool FC controversially obtained planning permission to build a 60,000 seater stadium on the listed Stanley Park next to their current stadium at Anfield Road. The district is predominately residential being largely unsuitable for a stadium. The club has the proposal on hold considering a stadium with a larger 73,000 capacity. Liverpool FC cannot extend over 60,000 capacity unless a rapid-transit rail station is built on the adjacent freight only Canada Dock Branch Line. The available station sites are not spacious and may require compulsory purchase orders to build a suitable four to six platform high throughput station.

This is an ideal opportunity for Liverpool FC to combine with the city council, Merseytravel, Everton FC and other bodies to assess reopening the Outer Loop line. A number of suitable stadium sites are available on the line for both clubs.

When all points are assessed the plan to open a rapid-transit rail line gives high value: