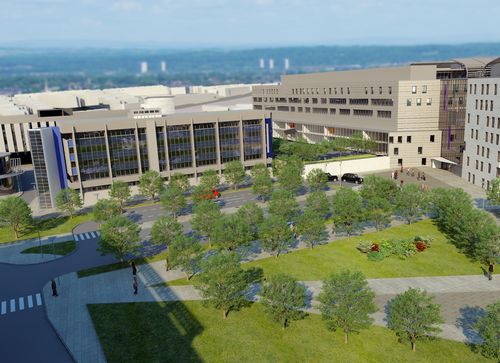 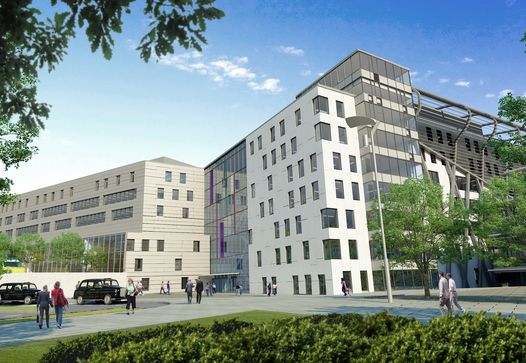 HERE are the first images of the planned new Royal Liverpool Hospital. The £477m blueprint to rebuild the city’s main hospital could be just days away from Government approval. And these artist’s impressions show for the first time how the development could look.

A decision on the plans is expected from Department of Health chiefs in the coming weeks. The new hospital cannot go ahead without their say so.

The pictures show for the first time how the main entrance and ward blocks would look and where the new hospital will be positioned. A mini park the size of the Albert Dock is included in the design in response to patient pleas for more green space. The park will be built where the current hospital stands. Solar protectors could be fitted to some exterior walls to prevent wards getting too hot from sunlight. And a separate A&E entrance will also be built.

Project director Helen Jackson said: “It is great to be able to finally show people how the finished hospital could look. “This is not a definite picture of the development. It could, and probably will, change over the next year or two. But it gives an idea. “The actual layout of the hospital – where the wards, theatres and departments are – will not change but the appearance may do. “But having these initial images really does help people to visualise just how different the hospital and the area around it will look. It is very exciting for all of us.”

The hospital will be built on a completely different section of land to where it currently stands – backing onto University Hospital Boulevard. The current University Dental Hospital on the site will stay put – as will the Linda McCartney Centre. But land close to Prescot Street – where the current hospital entrance sits – is earmarked for future hospital development in the coming years. There is also provision for a cancer centre which could be kitted out with revolutionary proton therapy to treat the disease.

If the plans are approved by Government the project will go out to tender as health chiefs search for a builder. This process should take two years before a contact is signed and planning permission sought.

The build will take three-and-a-half years. And if all goes to plan it will be finished in late 2015 or early 2016. Local health bodies including Merseyside’s Primary Care Trusts (PCTs) and the strategic health authority have already approved the plans.

She said: “The separate entrance for A&E is very important. “At the moment the entrance is quite chaotic. You have ambulances coming and going with blue lights flashing and people coming in the same way for all sorts of reasons. “In the new hospital the main entrance will be far calmer for patients who are not here for an emergency. “The A&E entrance will therefore be more efficient and less confusing. “The green space is also central. This forms a core area in the middle of the whole site and is something patients really wanted to be included. It makes a big difference to some people’s recovery to have that.”

And hospital chiefs still want all patients to have single ensuite bedrooms.

Ms Jackson said: “We are still set for individual rooms and all our specifications are laid out in piles and piles of documents – from how much light rooms need to the amount of space around beds.”

But not everyone is inspired by the plans. In June Keep Our NHS Public campaigner Sam Semoff took the Trust to the High Court and pushed for a judicial review into the plans. Mr Semoff claimed the original public consultation was inadequate as it did not mention the use of PFI (Private Finance Initiative) funding, and because there was no indication consideration had been given to people who preferred an option to refurbish the hospital.

The challenge was withdrawn in May after the Trust and Liverpool PCT agreed to hold another mini consultation. But through solicitors Mr Semoff is still pushing for the outline business case to be released. He and other campaigners are still concerned about the use of PFI cash to build the hospital due to debt implications. But health chiefs day insisted there was no alternative.

Ms Jackson added: “This hospital is wearing out. It is simply not built to provide modern health care. A new build is the only option and these initial images really show what a difference it will make.” Ms Jackson said certain aspects of the current design are a must for the finished hospital.

He said the build would help Liverpool "lead the way" in North West healthcare.

The new hospital will boast single en-suite rooms throughout, a garden the size of the Albert Dock and a separate A&E entrance.

Wards and departments will also be better laid out.

Mr Burnham, who was making the official announce ment at the city hospital this morning, told the ECHO: "This investment will help Liverpool lead the way in providing state-of-the-art high quality services for patients in the North West.

"The announcement today helps the local NHS make the best use of its resources and shows our NHS staff that we value what they do by giving them the best possible working environment.

"It also gives something back to the community by creating open green spaces that will be enjoyed for years.

"I am here today to give my personal backing for this development and to recognise the hard work of those who have brought us to this point of being able to announce such a key scheme for these communities in the North West."

Hospital chair Judith Greensmith said: "We are all absolutely delighted. This is fantastic news for the people of Liverpool and beyond and means that our patients will be cared for in world class facilities by staff providing high-quality services.

"The people of Merseyside told us they wanted a new hospital and we can now deliver the best possible building and services for them well into the future. It is local people who have made a new Royal possible.

"The new Royal will be a landmark building for Liverpool and means that we can continue to lead the way when it comes to research and innovation."

The plan will now go out to tender as health chiefs choose a building partner to complete the project.

This process should take two years before a contract is signed and planning permission sought.

The build should take three-and-a-half years. If all goes to plan it will be finished in late 2015 or early 2016.

Chief executive Tony Bell said: "The new Royal is cutting edge and will change the face of healthcare in the city. It will allow us to provide healthcare in a 21st century building, helping to improve health in the area.

"We offer a number of specialist services as one of the largest teaching trusts in the North West so people from across the region will benefit from the new Royal."

But some healthcare campaigners such as Keep Our NHS Public and Unison criticised the use of Private Finance initiative (PFI) cash to fund the build saying it will leave the hospital with huge amounts of debt.

HEALTH secretary Andy Burnham has described the city’s main hospital as “like a little bit of Eastern Europe in the middle of Liverpool”.

He said: “It is a long- standing aspiration to rebuild the Royal.

“The exciting plan is not just about providing the highest standard of healthcare facilities but also is a partnership with Liverpool university and the pharmaceutical industry, bringing jobs to the city.

“The government is confirming the plan is going to go ahead. It really is a wonderful day for the people of Merseyside – it is a down payment on the city’s future.”

He added: “This building has passed is sell by date, it looks like a little bit of Eastern Europe in the middle of Liverpool.”

He was joined by hospital officials including chair Judith Greensmith and chief executive Tony Bell.