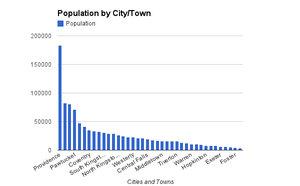 Rhode Island's population is primarily clustered around the Providence metropolitan area. Providence, the six cities that border it (including Central Falls) plus Warwick comprise more that half the state's total population. The chart below shows the relative size of Rhode Island's 39 cities and towns. The five largest cities are: Providence, Warwick, Cranston, Pawtucket and Woonsocket.

Rhode Island communities that comprise the Providence metro region are generally accepted as:

All of these communities are designated as cities, except for North Providence and Johnston. All are part of Providence County, except for Warwick, which is part of Kent County. Together, the Providence metro region hosts 544,378 people (2010 census)--more that half of Rhode Island's population. 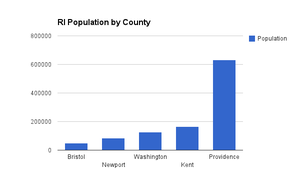 Rhode Island is divided into five counties with these population totals:

At various times, civic activists and elected officials have discussed the idea of merging Providence and its six surrounding communities into a single municipality. This theoretical combined metro would include the metro region listed above without Warwick and would have a population of 461,708.

Supporters of this concept suggest that merging these communities would reduce costs by eliminating redundancies. In physical size, it would be significantly smaller than many Midwestern cities like Chicago or Saint Louis. In population, the new metropolitan region would rank in the Top 25 cities in the US.

In 2003, Louisville, Kentucky, merged its city and county governments into a single structure with a population of nearly 700,000. The merger has generally been considered a successful decision.