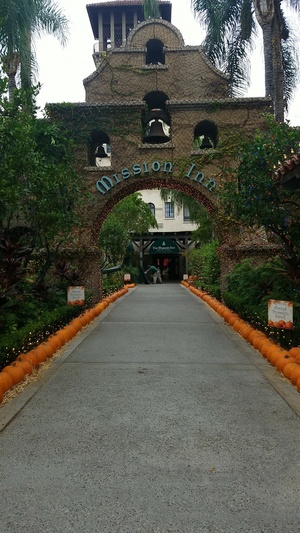 The Main Entrance at The Mission Inn

The historical Mission Inn, located in Riverside, California is a beautifully architected marquee landmark hotel and spa, not just revered in Riverside, but in the United States modestly speaking.  The origins of the Mission Inn goes back to 1876 but was constructed under a different name.  The Mission Inn was originally named the Glenwood cottage. A few fun facts of historical moments in 1876 are as follows:

The Mission Inn as we know it today was developed in 1902 by Frank Miller (1857 - 1935) in conjunction with architects Arthur B. Benton, Myron Hunt and G. Stanley Wilson.  Frank Agustus Miller was very prominent in the Riverside area.  Frank was a founding member of the County of Riverside when it separated from San Bernardino County.  Frank was also a key component in arranging the March airfield in Perris, Ca as well as helping to develop a citrus testing station  which worked to ward off diseases from the famous Riverside county citrus crops.  This testing station eventually became UCR (University of California, Riverside) which had 22,000 students in attendance in 2016.

Miller opened the first wing of the Mission Inn building in 1903. The Inn was developed in numerous phases, with each new wing representing architectural trends and reflected architect from Miller's travels throughout Asia and Europe.  By 1931, the Mission Inn included four wings in a maze of gardens, bell towers,  arches, and winding cases. The rich wood, grand fire places and tiles of the interior also echos the many iterations of the additions.

Throughout the years, the Inn was plagued with financial hardship.  Following his death in 1935, Miller’s family continued operating the Inn for the next two decades until 1956 when it was sold to San Francisco hotelman Benjamin Swig. In an attempt to revitalize the failing Inn, which was losing business to growing tourist hotspots like nearby Palm Springs, Swig sold nearly 1,000 artworks and artifacts from the hotel’s collection and redecorated the Inn in the latest midcentury styles. This effort did little to restore the Inn’s popularity and the hotel struggled through multiple owners and unending financial crises. It was even transformed from a hotel into dorm rooms and private apartments.

Fearful that the hotel would be permanently shuttered and its interior collections destroyed, in 1969 a group of concerned citizens formed the Friends of the Mission Inn, a volunteer organization dedicated to promoting hotel business and safeguarding the historic collections. As the hotel’s financial woes persisted, the City of Riverside’s Redevelopment Agency purchased the Mission Inn in 1976. In 1977, thanks to the efforts of local advocates and government officials, the Mission Inn was designated a National Historic Landmark by the federal government, officially marking the Inn as a site of national historic importance.

After keeping the hotel afloat for nearly nine years, the city sold the hotel to a Wisconsin- based private development firm, which closed the Inn in June 1985 to begin what would become a seven-year $50 million renovation project. With restorations nearly complete in December 1988, the hotel was once again plagued by bankruptcy and languished for three years without a buyer. In late 1992, local Riverside entrepreneur Duane Roberts purchased the Mission Inn and successfully reopened the landmark hotel for business.  https://missioninnmuseum.org/learn/history

Despite the financial difficulties of the Inn, many US Presidents and celebrities have stayed at the Inn, including but not limited to the following: 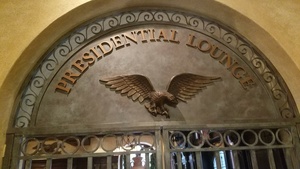 In addition to the United States presidents noted, social leaders such as Booker T. Washington, Susan B. Anthony, Amelia Earhart, Albert Einstein, Helen Keller and John Muir; and entertainers including Judy Garland, Bette Davis, Clark Gable, Tom Hanks, Barbra Streisand and James Brolin have all stayed, dined and relaxed at The Mission Inn throughout its nearly 150-year history.  In fact, along the grand entrance, there is a bust honoring Booker T. Washington's stay at the Inn. 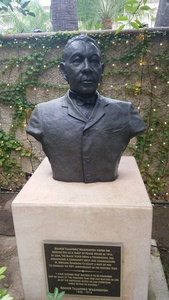 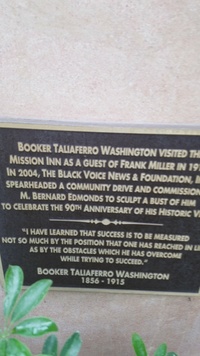 It's said that the ghosts of Frank Miller, and his sister Alice, still roam around the hallways and rooms of The Mission Inn. Alice's former room, located on the fourth floor of the Inn, is a popular spot for paranormal investigations. It's been reported that she makes herself known there by creating cold spots, and even reaching out and touching people physically from time to time.  The Bridal Honeymoon Suite, located across the hall from Alice's room, is said to be a hot spot of activity as well, and not just from the newlyweds inside. It's was reported that in 1993, a couple fled the room, and made a frantic escape from the hotel, just after reportedly being pushed on the stairwell by a spirit.

During my visit to the hotel, prior to valet parking my car I noticed the  beautiful grounds and the marquee 5 bell arch way welcoming guests to enter and enjoy.  The original Campanario (Bell Wall) was first built in 1903 and modeled after the Mission San Gabriel belfry.    As I proceeded down the main path way toward the hotel reception area I passed by a 5 foot tall bell.  Granted, there are bells located in many areas of the grounds, however, this rather large bell was of great significance.  The raised marker noted that the bell is a Nanking Chinese temple bell from the Manchu Temple in Nanjing, China.  The 3500 pound bell was cast out of iron allow during the region of Emperor Quang Hsu (1875 AD – 1908 AD) around the time of the boxer revolution http://www.history.com/this-day-in-history/boxer-rebellion-begins-in-china, and is considered priceless as it is the oldest bell in Christendom, dating back to 1247 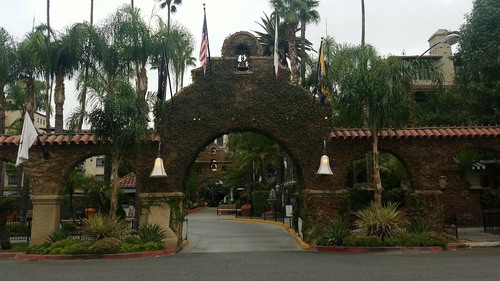 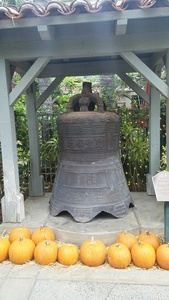 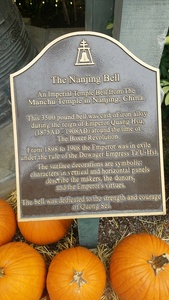 Just down the walkway from the Nanking Chinese temple bell, you will happen across two exquisite rather large talking parrots.  They are beautiful in color and if you are lucky they will talk to you.  I managed to get a whistle which made my day.

The Inn is also home to many priceless paintings including Henry Chapman Ford’s oil paintings of the 21 California missions and the California Alps by William Keith, 1874.  Additionally there are 8” tall Amitahba Buddha that was made in Japan during the Tokugawa period (1615 – 1868).

I have visited the Mission Inn for fine dining experiences, spa treatments, weekend lodging and holiday festivities alike over the past several years.  During my visits I am continually reminded about the beauty of the establishments from the deep colors in the expansive carpets, the deep, rich wood treatments on the walls and ceilings, and the great attention to details down t the eucalyptus infused hand soaps in the restrooms which mirror the intoxicating aroma coming from Kelly’s spa as one makes their way either to the downtown square or to Casey’s wonderful cupcakes.  By the way, Casey’s Cupcakes won Cupcake Wars and rightfully so… mmm!

The restaurants at the Mission Inn includes the AAA Four Diamond Duanes Steak and Seafood restaurant; Las Campanas authentic Mexican food; The Mission Inn restaurant; Bella Trattoria Restaurant and many more.  I have dined at them all and find the fare exceptional only leaving me looking forward to the next excursion back. 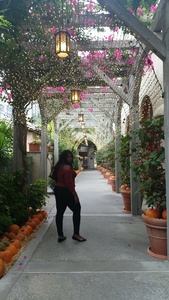 During the Christmas holiday season the Mission Inn celebrates with the Festival of Lights.  The Festival of Lights is one of the go-to locations during the holiday season.  The Mission Inn transforms the downtown scene into a glittering, shimmering, wonderfully decorated winter wonderland.   Visiting the Festival of Lights has fast become one of my families’ holiday traditions.  In addition to the wonderfully decorated grounds, the Inn also set up an ice skating rink which is indeed a rarity for the normally warm southern California climate.  According to the website, www.missioninn.com,    The tradition of the Festival of Lights was named the “Best Public Lights Display in the Nation by USA Today.  The festival draws over 250,00 visitors annually from all over the world.  Te festival includes 200 animated figures, an appearance by Santa Claus, the world’s largest man made mistletoe, horse-drawn carriage rides, elf truck, fresh snow, etc.

I cannot speak enough about the beauty and elegance of this establishment.  I have taken the liberty to provide some of the many accolades garnered over this Inn’s history from their website which includes the following: 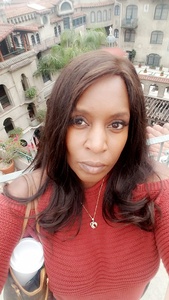 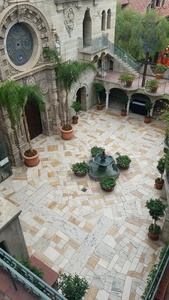 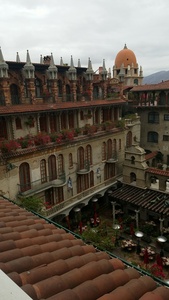 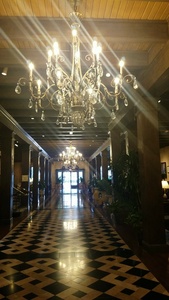