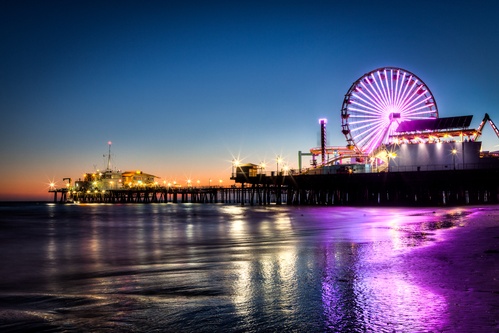 View of the Santa Monica Pier at night. Photo by Alik Griffin taken in 2012.

The Santa Monica Pier is a popular tourist attraction found in the beachfront city of Santa Monica in western Los Angeles County, California, United States. This iconic landmark has been drawing tourists from around the world for over 100 years. Whether people are from the area or not, they are attracted to all of the family-friendly activities that the Santa Monica Pier has to offer. The Santa Monica Pier in 1929. Photo courtesy of Business Wire.

The pier in its original form opened on  September 9, 1909. 1 The Pier was originally constructed as an answer to the city's sanitation needs. The 1,600-foot-long concrete pier carried sewage pipes behind the breaks in the ocean. 2  Thus the Santa Monica Pier was born, but it did not have one amenity. Shortly after construction plans were made to expand the already popular attraction. This was due to the Pier's immediate success with the local community who used the Pier for leisure activities like fishing and walking. Without any attractions on the actual Pier it was still a very popular destination for visits. Seeing an opportunity to profit, the Newcomb Pier was constructed by Charles I.D. Looff and his son in 1916.3 This new section of the Pier contained an amusement park and many of the attractions, like the Santa Monica Looff Hippodrome, which is still in existence today.4 Charles and his son Arthur were considered pioneers in the amusement park community, so it is only fitting that they improved the already popular Santa Monica attraction with an amusement park.

The pier has gone through its ups and downs throughout its long history. Events like the Great Depression and natural disasters have threatened the pier's viability, but it has persevered through these events. The city of Santa Monica has set up a public non-profit in order to attend to issues like this. This organization is the Santa Monica Pier Restoration Corporation (SMPRC) and handles the daily operations of the pier. 5 Things like event planning, marketing, promotions, sponsorships, and fundraising all funnel through the SMPRC.6 Events like the Twilight Summer Concert Series are held to generate revenue for the Pier and have been successful at drawing both funds and visitors to the pier.

A little know history of the Pier includes a story of its almost destruction in 1973. Early in that year, the Santa Monica City Council had a ballot to determine whether or not to destroy the Pier to make way for a land bridge that would connect Santa Monica to an artificial island proposed for the Santa Monica Bay. This manmade island would have a 1500-room hotel and a convention center.  The Council voted in favor of the bridge and island and plans were made to demolish the Pier. However, there was such a large public backlash to these plans that many politicians backed off the proposal.  However, three men remained steadfastly in favor of the new land bridge and refused to budge. All three of these men were up for reelection in the spring and the public elected three pro-Pier individuals to the City Council. They immediately repealed the destruction order previously voted in and the Pier was saved.

The Pier is located in Hollywood's backyard, so it makes sense that many movies have been filmed on and around the Santa Monica Pier. Television and films such as Forrest Gump, Iron Man, and Titanic all used the Pier for their shooting locations.7

It is estimated that the Santa Monica Pier draws over four million visitors annually. 8 The Pier is a great snapshot into the past that offers a great contemporary experience as well. 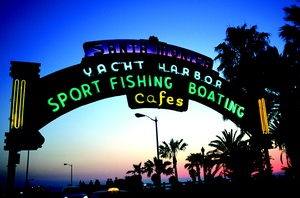 The iconic neon sign adorning the entrance of the Pier. Photo by Alexandra Pinhorn & Magellan PR.

The carousel and roller coaster are the two staples of the amusement park today. The carousel was originally built in 1922 and then rebuilt in 1990. The wooden roller coaster was purchased from a now-defunct amusement park in San Diego. These two attractions continued to bring visitors to the Pier, both from the local community and from out of town.

The neon sign that graces the entrance of the Pier is one of the most recognizable symbols of Southern California in itself. This was installed in 1941 Santa Monica Pier Businessmen’s Association to celebrate the opening of its newly-built concrete ramp.9 It is one of the most photographed icons in Los Angeles.

The Pier offers outdoor concerts, movies, and many other activities year-round. These events are usually free to the general public. The weekly outdoor concert series, dubbed the Twilight Summer Concert Series, is held every summer and is one of the most popular free events in Los Angeles.

Strolling down the Pier visitors will observe a variety of street performers and artists. These attractions range from acrobatics to face painting and everything in between. These performers create the electric atmosphere found at the Pier.

The Santa Monica Pier Aquarium is located below the Pier's eastern deck. This aquarium is operated by an organization named Heal the Bay. The Pier is also home to a video arcade, a trapeze school, and many bars. There are also many restaurants that line the Pier. These local and chain restaurants allow visitors to grab a bite to eat while enjoying all the Pier attractions.

Fishing is also very popular on the Pier. You can find many anglers on the western side of the Pier at any hour.

The Santa Monica Pier is California's oldest 'pleasure pier' and is the only pier with an amusement park on the West Coast. The Pier adds life to both Santa Monica and the city of Los Angeles as a whole.