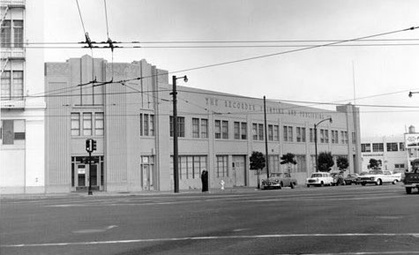 In 1964, from the collection of the SF Public Library

The Public Storage building at 99 South Van Ness Avenue (at Market St and South Van Ness) used to be the Recorder Printing And Publishing Company, also called the Recorder-Sunset Press. It was a printing plant and offices, built in 1934, which lasted until the company dissolved in 1986. 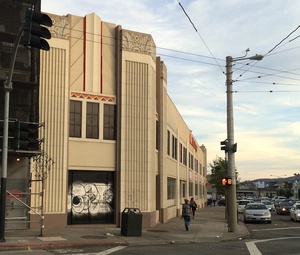 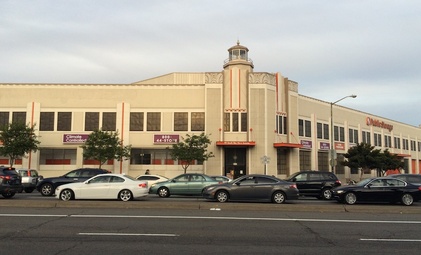 The Architect & Engineer, April 1935, had an illustrated article about the architecture of this building (pages 25-28), listing the architect and engineer as Will P. Day: 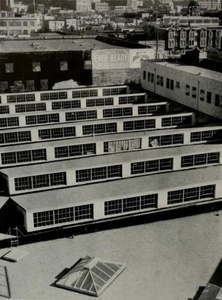 "The skylights give perfect daylight to the Recorder composing rooms." 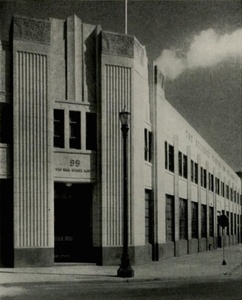 A couple quotes: "Buff walls and green pilasters, chosen for harmony of color, present an interesting facade. This selection, together with the gold letters in the company's name, produced the desired color effect." "The building is of reinforced concrete throughout and is designed to meet the requirements of the Riley Act relating to lateral forces." In 2009 it was still painted its original beige and green. (More photos.)

The video compilation Lost Landscapes of San Francisco 10 has a glimpse of this building during a Labor Day parade in about 1939 or 1940 (at 33:00, as part of a clip about the Yesson sign painting company). The film shows the building with "USED CARS" and "LOW PRICES" signs on the ground floor: 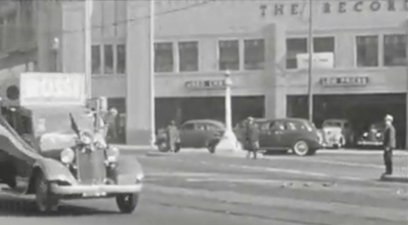 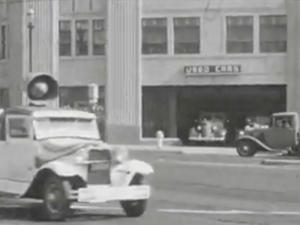 More from the clip 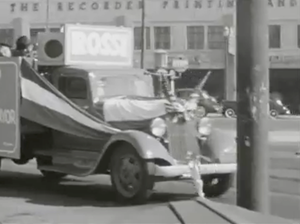 1911: "Proceedings of the First Annual Convention of the California Bar Association, held at Los Angeles, California, December 6 and 7, 1910" - published by The Recorder Printing and Publishing Co in 1911.

1920: "The Recorder Printing & Publishing Co., San Francisco, Cal., has succeeded to the business of the E. C. Stumm Bindery and has retained E. C. Stumm as manager of this department."

1930: An ad lists the addresses of the Recording Printing and Publishing Company as 337 Bush Street and 460 Fourth Street.

From an obituary: "In 1961 he joined the San Francisco-based Recorder Printing and Publishing Company as president, later to become chairman, CEO and owner. The company published two daily newspapers (the Recorder and Daily Commercial News), 22 daily special interest reports, and materials primarily for the legal community, as well as commercial printing."

"December 1986: "Another San Francisco newspaper, The Recorder -- published five days a week -- also was sold this week. The city's legal newspaper was sold to Am-Law, a New York-based company that publishes American lawyer magazine." "The Recorder was founded in 1877. It was owned by Recorder Enterprises, which will retain control of two subsidiaries, Recorder Sunset Press and the McCord Co."