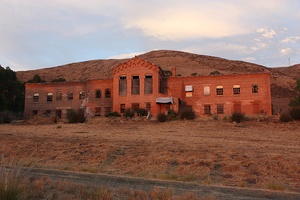 Sunny Acres was originally an orphanage, built in 1931, along with the General Hospital in front of it. After the orphanage, it was a TB Clinic, and then a prison for juveniles who were sentenced by the government. Local folklore also classes it as a former insane asylum. It was closed down by the Fire Marshall in 1974. Now it is abandoned and rumored to be haunted.

There are plans afoot to rechristen the site "Bishop Street Studios" and use it as transitional housing for people with mental illnesses.