Lyford Tower sits on a rocky perch above Lyford cove, overlooking Racoon Straits. It's a great spot for views of Angel Island and San Francisco Bay in general.  From the ferry terminal in downtown Tiburon, walk along Shoreline Park, past the Railroad and Ferry Museum, and past Elephant Rock, and up Paradise Drive to enjoy this historical landmark and the spectacular views.

The stone tower and archway over Paradise Drive were commissioned by Dr Benjamin Lyford and it was built in 1899 by the San Francisco architect Gustav A. Behrnd. It's designed in the Norman-style architecture and it's an example of the simplified form of Richardson Romanesque built in local cut ashlars sandstone.

It was designated the first historical land mark in the Town of Tiburon, California, on Nov. 25, 1974. 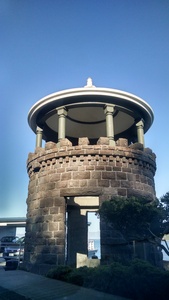 Dr Benjamin Lyford built Lyford Tower and the accompanying archway spanning over Paradise Drive to mark the entrance to his health conscious real estate development, Hygeia. The tower is the last and only remnant of his utopian planned community.

Hygeia, after the goddess of health, was planned for a town site and suburban homes and the tract skirted the edge of the Bay for several miles at Point Tiburon.

After retiring from his medical practice in San Francisco, Dr Benjamin Lyford moved to Strawberry.  He began developing real estate in Southern Marin and used the tower as his office space. Here, he would lay plans for Tiburon's first subdivision, Hygeia, and promoted it with a promise of residency near the "fountain of youth and health."

Dr Lyford came about his land through his marriage with Hilarita Reed, who was John Reed's daughter. His plan never came to fruition because he had set pretty high standards for admission to Hygeia.

After his death, his descendants finally start selling tracts of land, and development began where we now find Vistazo, Mar East, Diviso, and Solano streets.

The tower is now empty, and stands surrounded by private property on either side. The windows and furnishings are gone, but the structure is open to public visits.

Walk your history into Lyford's Hygeia