This was also known as the Chalmers York Town Line Church Cemetery. "This pioneer Presbyterian Church was located on the northeast corner of St. Clair Avenue and Pharmacy Road. Research indicates that the church and its adjacent cemetery were in use as early as 1858. In 1892, it was merged with York Station (East Toronto) Church and a new name, Emanuel, adopted by the congregation. A year later, construction of a new Emanuel Church at the corner of Swanwick and Benlamond Avenues commenced. Eventually the old structure on St. Clair was demolished, leaving the small church cemetery standing in isolation. In early 1952, the property on which the cemetery was located was sold to a land development company. In May of that year the remains from the cemetery were removed and reinterred by the trustees of the church in memory of the adherents of this pioneer Scarborough congregation.  Remains were reinterred to Pine Hills Cemetery, Section S, Lots 815 and 824." From https://www.mountpleasantgroup.com/en-CA/General-Information/Our-Monthly-Story/story-archives/pine-hills/Chalmers.aspx

"Chalmers', York Town Line was established in 1858 in what is now Scarborough, where the congregation bought property in 1858 and built a plank church."  "The amalgamated congregations of Chalmers' and York Station worshipped in the Railway YMCA at Main and Gerrard Sts. from 1892 until 1893, when they completed a new church building on property at Stanwick Avenue at Benlamond Ave"  "Emmanuel Presbyterian Church had its roots in two congregations: Chalmers', York Town Line and York Station."  "Clairlea Park began as mission of Emmanuel. Land was contributed by Emmanuel and their church building (St. Claire Ave. East at Eastgate Crescent) was substantially paid for through a contribution from Emmanuel's Extension Fund, created from the proceeds of the sale of its Burying Ground property at Pharmacy and St. Claire."  https://presbyterianarchives.ca/wp-content/uploads/2016/06/FA4000T.pdf

The local, still existing Clairlea Park Presbyterian Church was inaugurated on September 9th 1951 by The Reverend James Fyfe Donald of Emmanuel Presbyterian Church and "in May 1952, the ancient and uncared for cemetery at the corner of Pharmacy and St Clair was removed for the development of the Clairlea area."  From:  https://www.clairleaparkpresbyterian.ca/history.html

"Background Information: In 1858, the property was deeded to Trustees and a Presbyterian church building was erected on the site in 1859. In 1892, the congregation merged with the York station (Emmanuel) in East Toronto and the building was demolished. Over 70 interments took place between 1861 and 1941. In 1950, over the written objections of many of the descendants, the trustees decided to sell the property.

On Feb. 15, 1951, O. Reg. 33/51 of the cemetery Act was passed, officially closing the cemetery. A quick transcription of the stones was made in early 1952 and excavation of the remains began on May 6th/52. The human remains were placed is common wooden crates and , with what was left of any caskets and the original stone markers, were transported to nearby Pine Hills cemetery where they were placed into a large common pit. A large monument now stands on that site with only the names of those who were recorded earlier but without any dates or other information which were on the original monuments.

"Redevelopment The property was eventually sold to Imperial Oil who built an Esso Service station on the site. Except for the installation of large gasoline holding tanks beneath the pumps, the rest of the property remained undisturbed and was simply paved over. The service station later closed and was demolished. The site was never properly documented and there remains a possibility of human remains still buried on site.

"Recent Assessments for proposed residential construction of townhouses A Stage 1 background study archaeological assessment was completed and site testing plus a cemetery investigation is required (Stage 2 assessment). This has not been completed as of June, 2017. According to the City planner, the new owner is aware of a number of issues that need to be resolved before they could submit a revised site plan. Preservation staff have reached out to the project manager of Parks, Planning and Development to get some perspective on Parks desire to acquire this land for a park. The city has a parkland acquisition budget. The owners may be happy to sell to the city as developing the land has presented some challenges for them. Parks may consider taking on the site given the archaeological significance. Due diligence would be required before City took on anything further. A memorial plaque, park bench and some trees for the site have been propsoed by local residents and descendants of those originally interred on the site." Minutes of the Scarborough Community Heritage Preservation Panel, Jun 13, 2107

"It's been empty because of heritage and archaeological issues and since there is a remote possibility they missed a body or two when the closed the cemetery in  . . . A second dig in 2021 confirmed there were no bodies remaining.” https://www.facebook.com/scarborough.lookingback/posts/10155853977890273

"A letter from Chuck Pomeroy whose family ancestors date back to Scarborough in the 19th century. Mr. Pomery notes that while James Grant’s remains are reported to have been removed from the cemetery in 1952 and reburied at Pine Hill’s along with fifty other early settlers who had been buried at Chalmers, there is no record of James’ wife Barbara’s remains being relocated.

The possibility exists that Barbara’s remains, possibly others, remain beneath the abandoned property on the north-east corner of St. Clair and Pharmacy. Much of the land has never been thoroughly excavated as the only other use for the old cemetery was a gas station and parking lot.

Although no communications from Susan Hughes, HPS Archeaology Project Manager, was received in time for discussion at the committee meeting, the following email was received shortly thereafter:

“Sorry for the delay in getting back to you. I checked in with the planner Kelly Dynes on this project for an update when I returned from vacation. No action from the existing owner and no further discussion with the City regarding parkland use. The city may be issuing a closure letter on the development application file due to inaction.

"HPS has asked that the closure letter if issued include a comment on the requirement for a Stage 2 archaeological assessment and cemetery investigation, in accordance with the OHA and 2011 Standards and Guidelines for Consultant Archaeologists, prior to any soil disturbance activity taking place on site.”  Minutes of the Scarborough Preservation Panel, Sep 12, 2017

William “Bill” Alexander Latham was born on February 29, 1852 in Scarborough. A farmer, Bill married Jane Miller on October 17, 1894, and together they had four children. They were among the early settlers of Scarborough Junction. Several early Latham family members were first buried in Chalmers Cemetery at St. Clair and Pharmacy, but by 1928 the cemetery had been abandoned, and the family decide to use Pine Hills Cemetery for future burials. Later, a number of the Chalmers burials were moved to Pine Hills in 1952. Bill Latham, who died in April 1928, was not buried until July 5th, when he became the first burial in Pine Hills Cemetery."

"In this plot were reinterred on May 22, 1952, the remains of early settlers of Scarborough and East York who were buried in Chalmers Presbyterian Cemetery which was located at St Clair and Pharmacy Avenues in Scarborough.  The original monuments are also buried here."

Underneath the 4 sides, "They live in thee and there we find them worthier to be loved" 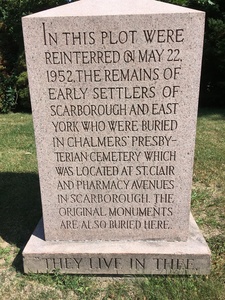 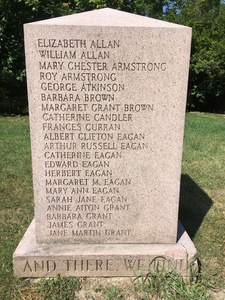 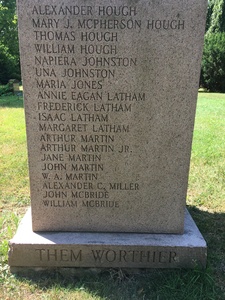 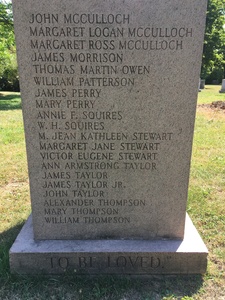 The Ontario Genealogical Society also provide a transcription of the grave markers.  https://torontofamilyhistory.shop/item/chalmers-presbyterian-cemetery-scarborough/

This is available at the library at https://www.torontopubliclibrary.ca/detail.jsp?Entt=RDM1509455&R=1509455 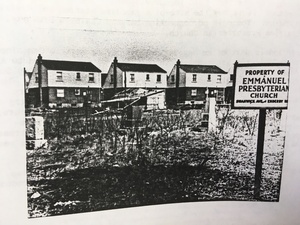 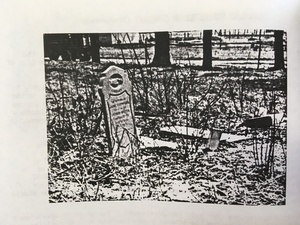 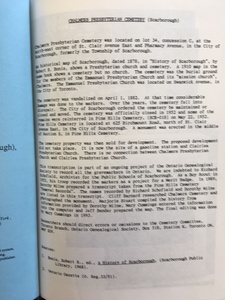 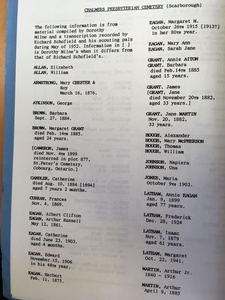 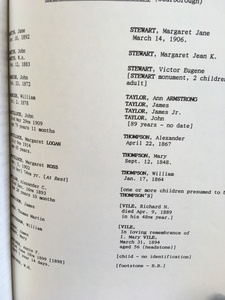