Most people who have a tie to Tucson or the University of Arizona can agree that the Arizona Stadium is one of the best representations of the city. The trending hashtag "#OurHouse" was created by Arizona Athletics in 2016 to express the unified feeling of the stadium on game day. The hashtag was based off of the song "Our House" by Flo RIda which is played in multiple videos to excite the U of A community about Arizona Football. 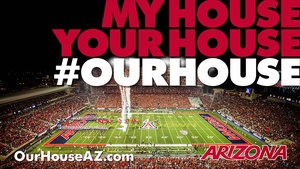 The iconic Arizona Stadium located in Tucson, Arizona is one of the most essential aspects of bringing the Tucson community together. During game days, fans from all over the country gather to support the Arizona Wildcat football team. Starting out with only 7,000 seats when built in 1928, Arizona Stadium now holds 56,000+ loyal fans.

The design of the wildcat stadium is visually appealing. When driving down 6th street, a huge 'A' is proudly glowing at night. On the east side of the stadium, the words "Home of the Wildcats" radiates across the wall. Before entering the stadium blue cemented footballs are displayed out front. Since the stadium is mostly all grey cement, areas of the stadium are painted red and blue to represent Arizona's school colors. Flags are also prompted across the stadium representing each Pac-12 school above the north end zone bleachers. This $6.3 million structure helps promote increased interest in the football program at the University of Arizona. In August 2013, the Lowell-Stevens Football Facility was the most recent addition towards our stadium. This was ranged as a $72.3 million project providing club seating, restrooms, concessions and the beautiful Sands Club. Without our amazing designed stadium we wouldn't have a home for our amazing Wildcats. 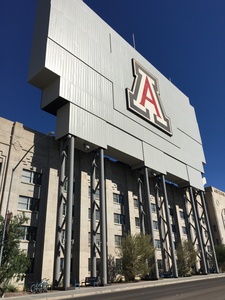 The first game held at Arizona Stadium was on October 12th, 1929 when the Arizona Wildcats prevailed over the California Tech Beavers. The Wildcats have played a total of 468 games in Arizona Stadium and average a 65% winning percentage. The Wildcats have gone undefeated at Arizona Stadium nine different seasons, and have won at least one home game in a season. The stadium is often packed, averaging over 50,000 in attendance since the addition to the stadium in 2013. The addition added many new features to the stadium including club seating, restrooms, concessions and the Sands Club. Previous to the most recent addition, the 72 year process has slowly built up to the current form of the stadium.

The importance of a high quality facility has become essential in the recent past, as the University of Arizona football program has gained much prestige through impressive showings in the past few seasons. The facility helps the team recruit and retain players in order to have a successful program. In 2018, Arizona football welcomed new head coach Kevin Sumlin. Coach Sumlin was previously the head football coach of Texas A&M University and the University of Houston.

The University of Arizona football team has been to thirteen different bowls and has played in twenty-one bowl games since December of 1921. The U of A has won nine of these games, lost eleven, and ended in a tie against the University of Georgia in 1985.

There have been many legendary players that have played for the Wildcats throughout history in this stadium. Some of these include Rob Gronkowski, Tedy Bruschi, Lance Briggs and Nick Folk. All aforementioned players have had very successful careers in the NFL after becoming products of the prestigious University of Arizona football program.

The territorial cup is a huge symbol for the University of Arizona football team. This trophy came into play on Thanksgiving Day, 1899. The game was against our rivalry, Arizona State University. Unfortunately, the U of A lost the game and ASU was awarded the trophy. The Territorial Cup is now said to be the oldest trophy for a rivalry game in America. The University of Arizona last won the Territorial Cup in 2016 right in Arizona Stadium. 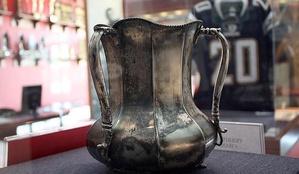 The use of our catch phrase "Bear Down'' is a very popular and exciting phrase when entering the gates of our stadium. The two-word phrase was the last words of UA quarterback and student body president John Button Salmon, who passed in result from complete body paralysis caused by a car accident. His final words, were spoken to coach "Pop" McKale, as: "Tell them.....tell the team to Bear Down." From there, it has stuck with the University and has become an impactful voice when shouted through the stadium. This is necessary to understand the history of this catch phrase to signify the importance of John Button Salmon and his value to our campus. 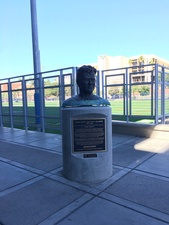 The Pride of Arizona

While the Tucson Community supplies the support, the entertainment that keeps the stadium alive is provided by the University's very own Pride of Arizona Marching Band. The first band at U of A was technically recognized as a military unit in 1902 featuring twelve talented musicians. In 1922, the marching band made their first appearance at a football game in Arizona Stadium. Today, the POA is composed of over 250 band members who use the stadium to rehearse their pregame and half-time shows that are performed at each game. A combination of wind, percussion, and auxiliary performers make Arizona Stadium come to life during the famous Pride of Arizona Band Day. Approximately 40 local high school marching bands join in Arizona Stadium to compete for the famous "Nunamaker Award" with the execution of their half-time show. 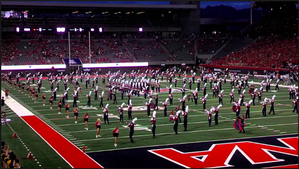 Nothing gets the ZonaZoo, which is filled with 12,000 students more amped up than the Arizona fight song. This section is said to be the biggest student section in the Pac-12. All our school spirit fills this section with love, dedication, and high spirits. In 1952, Jack K. Lee was the expert behind the lyrics to our beautiful fight song. He was an applicant for the UA’s band directorship. From his airplane window, he began embracing UA pride and writing down lyrics to the passionate fight song. It was said after a public view it was named the Arizona fight song known as, “Bear Down, Arizona.” This fight song is very important because it gives students and visitors a way of showing there spirit in the UA stadium.

Who gets us pumped up more than our very own mascot Wilbur and Wilma? These two furry animals are what get our whole audience more spirited and pumped for game day. The first real desert bobcat Rufus made his first appearance in 1915. Using a real bobcat stopped in the mid-60s.  This is when Wilbur, the first costumed student mascot, was announced during the 1959 football game. Using Wilbur as a mascot became a huge hit and ever since he was Arizona’s spirit animal.  Wilma Wildcat was produced when designers were trying to make another costume of Wilbur. On November 21, 1986 Wilbur and Wilma were married before the Territorial Cup against ASU.

Many people associate the University of Arizona Football stadium strictly with football season. However, the stadium also serves another important purpose all year long. Located directly underneath the stadium is the Richard F. Caris Mirror Lab, where a team of scientists and engineers are creating mirrors used for a new generation of optical telescopes.

The Mirror Lab began back in 1980 with Dr, Roger Angel, the lab's founder and scientific director. Since then, the Mirror Lab has developed  a revolutionary new method of making mirrors with a deeply curved, parabolic surface that results in much shorter focal lengths than conventional mirrors.  In January 1997 the first 8.4-m mirror for the Large Binocular Telescope (LBT) was created in the lab. The Mirror Lab is currently casting a mirror for the Giant Magellan Telescope which will be the largest and most advanced earth-based telescope in the world when complete.

Tours of the Mirror Lab are open to the those who want to visit. Tickets are available for purchase until 10am on the day of the tour (call 520-626-8792) Monday through Friday. Typically Tours go from the times 1pm and 3pm. The tours are guided and last 90 minutes where you learn about the history of the lab and how it produces the largest and most advanced giant (8.4 meters / 27 ft)  telescope mirrors in the world right on the University of Arizona campus.

(Images from Melissa Cohen's phone all above)