The Cocoraque Butte and Ranch

The Cocoraque Butte and Ranch is an authentic 1890’s cattle ranch located in southern Arizona. It is rich both historically and culturally, offering an educational adventure for Arizonans of all ages to enjoy.

History of The Cocoraque Land

Many would be surprised to know that the Cocoraque Butte and Ranch is not only a historical cattle ranch, but an ancient native American campground site. Native American ancestry is deeply rooted in Arizona and the Cocoraque Ranch long before the cattle ranching cowboys settled in the area. Added to the National Register of Historic Places on October 10, 1975, the Cocoraque Butte Archaeological District features ancient Hohokam ruins, hundreds of well-preserved petroglyphs, and the historic Cocoraque Ranch.

Around 300 B.C., a culture of people thought to be ancestors of the Pima and Papago tribes, known as the Hohokam, migrated from the south to this area. They began farming and living in semi-permanent dwellings. Evidence of their presence still lingers today in the art forms of petroglyphs that are chipped into the granite boulders surrounding the ranch.

The Cocoraque Butte Archaeological District is adjacent to the Tohono O'odham Indian Reservation, on the westernmost edge of Avra Valley. Artesian springs at the base of the butte have attracted people during both prehistoric and historic times. The 300-acre district and adjacent properties also contain several long-term Hohokam residential sites, which were occupied from Colonial (CE 700 or 800) to Classic times (CE 1400). Cocoraque Butte stands out because of the hundreds of Archaic and Hohokam petroglyph panels on top of it.

While some petroglyphs at Cocoraque Butte are beautiful, others resonate with meaning for the Tohono O’odham. One of these is a spectacular depiction of an early style “man-in-the-maze” design. An elderly woman at the O’odham village of San Pedro, who explained that this was the original maze design used in O’odham basketry. In recent years this old design has been supplanted by a newer design that features a recognizable man within the maze.

A number of boulders show indications of continuous tapping by prehistoric hammerstones. When tapped, each produces a distinctively different ringing tone that, in combination, create an almost surreal musical atmosphere. These sounds have even been incorporated into commercial "New Age" recordings. 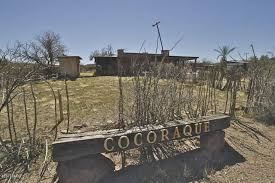 Cocoraque is Spanish for "house by the butte." The O'odham name for Cocoraque Butte is "Shontok". In the O'odham language, "shon" has several meanings, one of which is the "source" or the "beginning." Shontok is thus an allusion to the source of water used to supply a hand-dug well, about twenty-five feet deep, at the Cocoraque Ranch. The well, which isstill visible today, was fed by seepage from an adjacent stream, which used to flow all year round. "Shon" also means to pound, and knowing this, the O'odham visiting Cocoraque Butte suggested the place name may also refer to the pounding and pecking that was part of the technology used to produce the numerous petroglyphs at the site.

The Cocoraque land was homesteaded in the 1890s by Oscar Robles. Cocoraque is one of the oldest working cattle ranches in Southern Arizona in the Avra Valley. It is located approximately 7 miles west of the Sonoran Desert Museum. The Ranch House itself is a two-bedroom, 1,200 square foot, burnt adobe home, built in the 1890s. It offers a mesquite-fired barbecue grill, a covered serving area located on the porch area, and horse corrals. The house is surrounded by the beautiful Saguaro desert with secluded desert views all around.

The ranch is now located is the last remnants of a huge Mexican land grant that extended from below the present Mexican border to a line somewhere north of the present ranch border.

The original owner, Sr. Benito Robles, (grandson of Oscar Robles) consolidated the holdings by mutual agreement with other Spanish (Mexican) landowners in the region when the territory was still part of Mexico. Sr. Robles was one of the principal governing authorities in the region. After the Treaty of Guadalupe Hidalgo between the USA and Mexico in 1848, the Arizona Territory was created. This caused difficulties in title and ownership of land, so for a period of 4 years, the ranch was the site of an Apache encampment until the U.S. Cavalry arrived to settle the ownership. 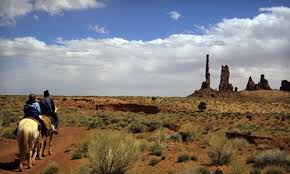 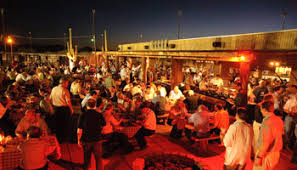 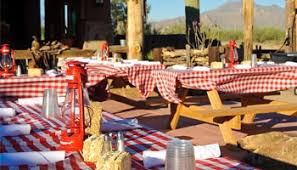 Jesus Arvizu, a Tucson native and third generation cattle rancher whose ancestry line originates from Nacosari and San Pedro de la Quierva, Sonora, Mexico, is the owner and operates the ranch. As one of the last working ranches in the area, it provides a truly historic link to one of Tucson's oldest professions. In 1996, Mr. Arvizu opened up the Cocoraque (a word meaning, "house by the butte") to guests who want to experience a day in the life of a real Arizona cowboy.

Today, Cocoraque Ranch is open to the public and accessible by main roads. Cocoraque Pavilion is the host of many events such as birthday parties, family reunions, weddings, and company picnics. Guests can experience life as a cowboy in the southwest with activities like cattle drives, jeep tours, rodeos, and horseback rides on the desert trails. For a more relaxed desert experience guest can also enjoy the authentic saloon bar.

The Cocoraque Ranch is truly one of the last authentic cattle ranches of the old west. It showcases the blending of history from Native American artifacts to the cowboys of the old west. Its historical and cultural significance is unmatched and should be preserved for future generations to experience.

If you are in the Tucson area and want to visit the Cocoraque Butte and Ranch, visit their website or contact them for more information: 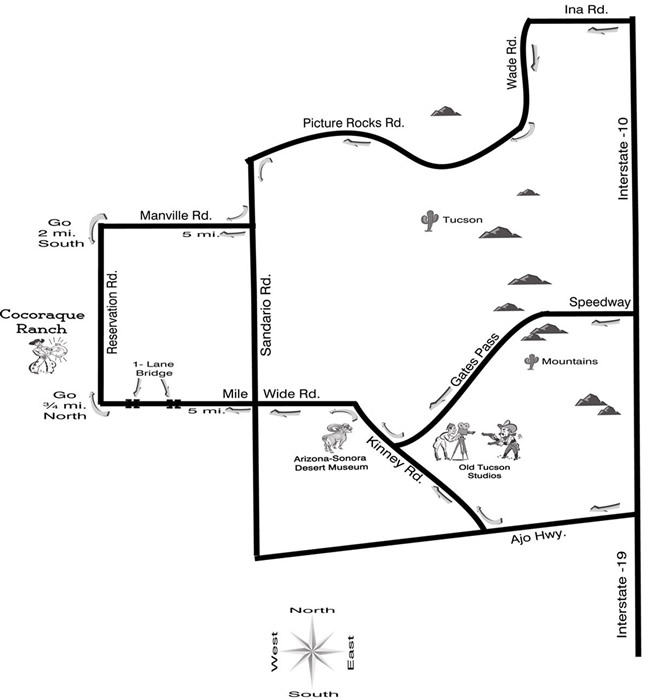