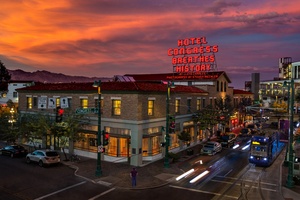 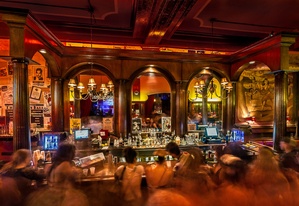 Constructed in 1919, The Hotel Congress is a historical landmark in downtown Tucson. In 1934, infamous bank robber John Dillinger set to hide out in the hotel, where him and his fellow gang members congregated on the third floor under aliases. Quickly after, a fire started in the basement of the hotel and spread to the third floor. After the front desk tried contacting them through a switchboard, the hotel guests were able to evacuate by using aerial ladders. The gang requested with the help of a generous tip that the firemen grab their luggage before they left. It was later discovered that the suitcases contained a small arsenal and over $20,000 worth of cash. Once the firemen saw the face of Dillinger in a magazine, they let the police know and finally he was arrested on North Second Avenue. To celebrate the intelligence and ferocity of the firemen and police, downtown celebrates “Dillinger Days” on the third weekend in January with reenactments, food, and music. In 1985, the hotel created a music venue and has since continued to host an assortment of bands, such as the Rialto Theater and the Fox Theater. The hotel lobby bar is known for their 150 different spirits and unique cocktail menu and the hotel is home to one of the most well regarded restaurants in Tucson, Cup Cafe. 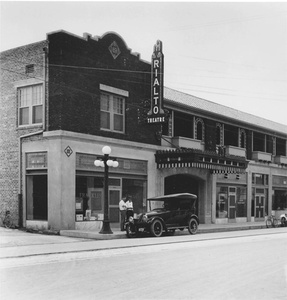 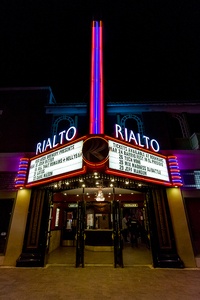 The Rialto Theater is a well-known historical artifact and still remains as one of the premiere concert venues in downtown Tucson. The theater is a sister building to the Hotel Congress, both built by William Curlett and Son. The name “Rialto” comes from a medieval bridge in Venice, Italy in which an “entertainment district” was built and also holds the meaning of old plazas where all economic classes could go, as opposed to the theater and opera which was only permitted for the rich. Located on Congress Street, this institution has housed some of the most well known artists such as: The Black Crowes, Linkin Park, The White Stripes, Maroon 5, Dave Chappelle, Morrissey, Fugazi, and many more. The hall was built in the early 1910's and first opened its doors to the community in 1922. In the mid 1940’s, a piano player in the orchestra died because his piano bench broke and his piano fell on him, resulting in incurable head injuries. It is thought that his ghost still haunts the theater today. The Rialto first served as a movie theater showing mostly silent films, then led to Vaudeville shows, and finally played its first big screen movie, "The Toll Gate." Once the theater was bought by Paramount-Publix, the name was changed to The Paramount. In 1963, Tucson found itself in a recession and The Paramount was closed from 1963 to 1971, so the vacant theater served as storage for a furniture store. Once the 90’s came around, The Rialto was purchased by Paul Bear and Jeb Schoonover and was re-opened under its original name. In an effort to contribute to the “Rio Nuevo” project, which helped the renewal of downtown Tucson, Bear and Schoonover sold The Rialto in 2004. Currently, The Rialto operates as a nonprofit organization and will always stand as a historical and meaningful center for some of the talented artists of all time. 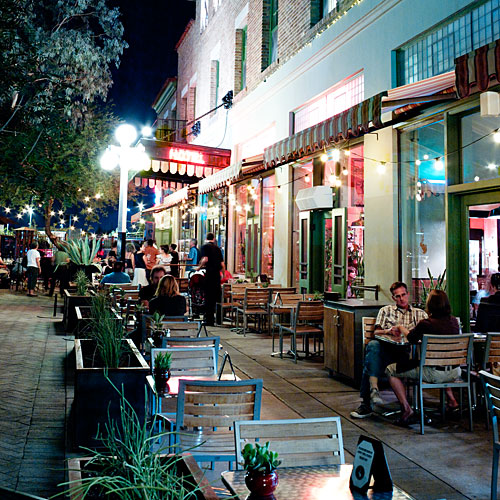 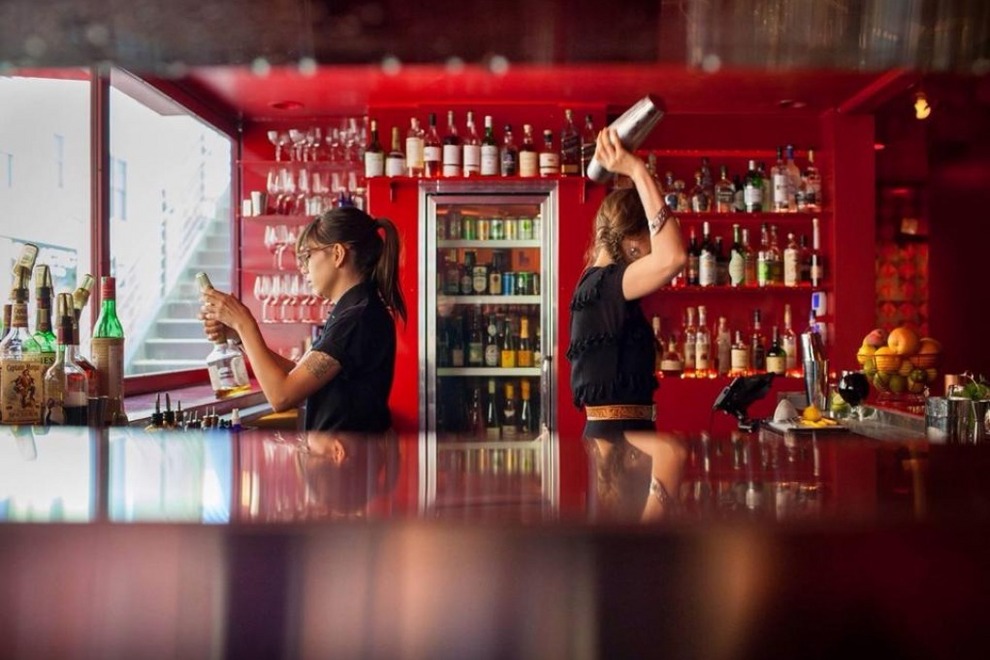 Congress Street is home to some of the best bars, bites, and fun events in the heart of downtown Tucson. Some of the most popular restaurants range from classic American eats like, Hub Restaurant and Ice Creamery, Downtown Kitchen & Cocktails, and 47 Scott. From Phoenix, the famous Pizzeria Bianco, Empire Pizza, and Reilly Craft Pizza & Drink all provide fresh ingredients with an authentic and delicious style of pizza. The area also offers a modern take on Mexican food, with spots like, Cafe Poca Cosa, Alejandro's Cafe, and Penca. If you're looking for a great brunch spot, Nook is a fun place to enjoy on the patio and places like Proper are great for eating inside their modern yet homey space. The street also serves to the grab and go customer demographic, with favorites like fast casual Diablo Burger, a great cup of joe at Sparkroot Coffee Bar and Fare, and the street has recently opened up a ramen bar called Obon Sushi Bar Ramen. Congress Street has a variety of festivals and gatherings such as, “Downtown Noir Film Series,” “Sock Hop fundraisers,” and it’s upcoming “MoctoberFest” which is a spring carnival. 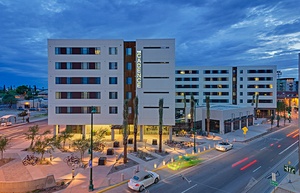 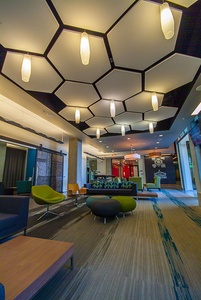 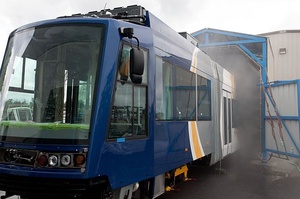 Affiliated with the University of Arizona, student housing is made available on Congress Street with the help of The Cadence. The Cadence opened its doors to students in the fall 2013 semester, complete with 99 apartments. The Cadence has provided students with amenities ranging from a resort-style pool, hot tub, rooftop lounge with fire pits, an indoor fitness center, and even a golf simulator. The Sun Link also runs past the Cadence, and has served as the main source of transportation for students to get from downtown to main campus. The Sun Links construction and full plan was passed by Pima County in May of 2006 and cost an astounding $2.1 billion to create. The “RTA” or Regional Transportation Authority funded the development and it is co-run with the help of The City of Tucson. In addition, the streetcar system is able to accommodate bicycles and has wheelchair and stroller access, complete with a route of 18 stops all over beautiful Tucson. The Sun Link is expected to stop every 10 minutes daily and every 20 minutes nightly. Since its opening in July 2014, the Sun Link has transported 1 million plus passengers around a 3.9 mile radius which stops in five of Tucson's most exceptional neighborhoods.

Congress Street is known as a hub for nightlife as well as everyday venues ranging from restaurants, shops, bars, and entertainment for all. Whether it be a college student on the hunt for a good restaurant, or a local Tucson family in search for fun activities, Congress Street has made itself into one of the most superb downtown destinations, and will continue to add to its rich history and culture as time goes on.