In a quiet tucked away corner of the colorful and historical Barrio Viejo or “Old Neighborhood” in Tucson, AZ, lies a monument that resembles the stuff of Hollywood legends. El Tiradito, which translates to “The Little Castaway” is a Catholic shrine and the only one in the United States, dedicated to the soul of a sinner instead of a saint. The Southwest Lore elements are part historical fact and part local legend, and the story of Juan Oliveras’s sad demise is a perfect example of that.  In a part of Southwest where on both sides of the international border with Mexico “folk saints” are revered alongside the Virgin of Guadalupe and family patron saints, the idea of people praying and asking guidance from a sinner isn’t so far-fetched. 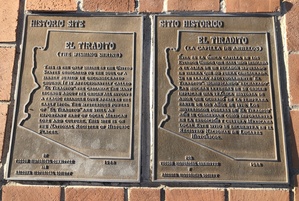 The story goes back to the early years of Tucson’s Barrio Viejo, during the 1870’s, where 18 year old Ranch Hand named Juan Oliveras was caught in a steamy and very secret love affair with an older woman - his young wife’s mother.  In most retellings of the story, it is said that his father-in-law, who happened to be one of the wealthiest and most powerful men in town, caught the two adulterous lovers together in his own bed and in a fit of rage chased Oliveras and killed him, leaving his body in the street. However, the stories vary as to how he was killed, most saying he was axed or stabbed to death thus making that part of the story more folklore than fact. Knowing that he would be punished for the gruesome crime he just committed and most likely be hung for it, the father-in-law saddled up his best horse and fled South towards Sonora, Mexico in an attempt to escape before the Tucson Marshals could arrest him. Allegedly, karma was served in this tale when the father-in-law too met an unfortunate and ghastly end. After attempting to bring his herd of sheep to Mexico where he was hiding he was met by a tribe of Apaches, and they became his killers when they scalped and stabbed him. They also took all of his belongings and tied him naked to a large Saguaro cactus along the Nogales to Tucson wagon trail..

Sadly the tragedy does not end there. The same night of Juan’s murder, his mother-in-law so despondent due to her lovers death hung herself from the balcony of their grand Tucson estate. Soon after her daughter and Juan’s young widowed wife followed suit, desperate and alone, she lived by oneself in the abandoned large ranch owned by her now dead parents, she found the well on the property tied the rope around her neck and jumped; her neck snapping instantly. It is said that she was pregnant at the time with Juan’s child, her body was found almost a week later by neighbors and she was buried on the property under a mesquite tree that still stands.

The local barrio residents pleaded with the Roman Catholic Diocese of Tucson to let them bury his body in the local cemetery. Due to the fact that Olivares was an adulterer and died because of his transgressions, the Diocese refused.  Instead, he was buried in the same location that his body had been cast away by his murderer. 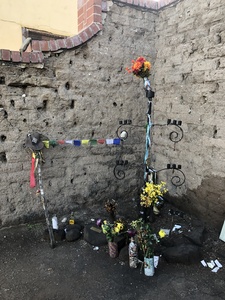 Although the shrine was moved from its original site, the grotto that it now exists in has been its current location for close to 100 years, since in 1928 it was moved a block west to 420 South Main Ave where it currently lies discretely next to the El Minuto Cafe and a Tucson Mural. Some 50 years later, the Olivares’s buriel site and his shrine would be credited with stopping plans for a freeway that would have completely destroyed what was left of Barrio Viejo. In 1971, the folklore shrine was entered into the National Registry of Historical Places, because although he was a sinner he was also a lover, so many believed they needed to pay homage to a well loved martyr. 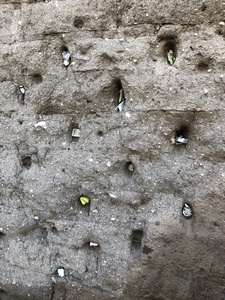 The shrine is also known by another name, “The Wishing Shrine.”  Many faithful leave candles, small tokens, or push notes and prayers into the cracks of the shrine’s adobe walls.  It is said that some are asking for redemption from their own bad decisions and deeds, and others pray for the soul of Juan Olivares to leave purgatory.  A visitor could spend an afternoon just admiring the various items and age that is shown on the adobe walls and dirt floor of the shrine to a sinner.  Those that are superstitious may also believe in the "Curse of the Wishing Shrine." According to the Tucson Museum website, "It is said that if one visits with a clear open heart that forgives, they will pass, and they may even get their wish fulfilled. For others, it may just be the beginning of history repeating itself depending on what they themselves bring to the shrine. Also, it is said that if you light a candle at the shrine and it remains burning all night long without going out by sunrise, your wish may be granted depending on your motivations."