The Fox Theatre originally opened on April 11, 1930 as a dual vaudeville/movie house called "The Tower."  Built by Nicholas Diamos as one of his chain of theaters in Southern Arizona, it was then taken over by Fox. It had a full stage, dressing rooms beneath the stage, and a full fly-loft. However, due to the depression and the "talkies", the dressing rooms were never finished and there was a limited budget and opportunities for live performances. The budget reached over $300,000 to finish the original building because of details such as the furnishings. It opened as a movie theater and a place for the Tucson community to gather for live events. It has since then been known as the "crown jewel" of downtown Tucson's entertainment for over 40 years. On opening night, there was one of the biggest celebrations that the small community of downtown Tucson had ever seen. Over 3,000 people bought tickets to see a show on opening night as Congress street closed and was waxed for dancing, had four live bands, a live radio broadcast and free trolley rides downtown which made the party one that should not be missed. The theatre served as Tucson's most revered "Classic Movie Palace" which hosted community events, vaudeville performances and more. The Tucson chapter of The Mickey Mouse Club was one of the first shows ever to be performed in the Fox Theatre on Saturday mornings. There was much competition between the Fox Theatre and other theaters in Tucson, but times eventually got tough. Although the Fox Theatre was a hit when it first opened, as more theaters began to open as competition, it caused the Fox Theatre to close down in 1974. After sitting unused for 25 years, the idea of restoration did not phase the owners. In 1999, the nonprofit, Fox Tucson Theatre Foundation purchased the property for $250,000. After a lengthy restoration process, it opened back up on New Years Eve in 2006. Today, the Fox Theatre serves as a multipurpose performance venue that seats over 1000 people. 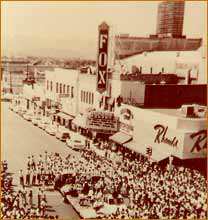 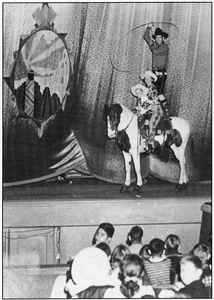 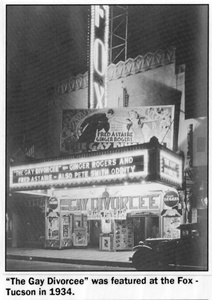 For over 25 years, the Fox Theatre remained vacant and home to over 40 homeless people. There were extreme amounts of damage from water, vandalism, and neglect that needed to be fixed, it was nearly beyond restoration. The owners, who had planned to demolish the theater for a future office building, had decided to let the building decay on its own and had little interest of selling it to anyone. However, after a two year negotiation with the property owner,  once the roof was fixed, rehabilitation on the inside could begin. Fortunately, the non-profit Fox Tucson Theater Foundation stepped in and in 1999 and bought the building for $250,000. From there, the restoration process could begin. Starting with building a new roof in order to stop any further damage from the elements, the Fox theater was slowly starting to come together again. After 6 years and $14+ million rehabilitation headed by the Executive Director Herb Stratford along with many dedicated volunteers, the theater reopened on New Years Eve 2006 (12/31/2005). As plywood was removed, amazing discoveries were found. The original columns with 1930's tile had been covered up on the outside in 1956, and the original ceilings with colorful freeze trim had been covered up in 1956 as well. Fox has been a touchstone of memories for many in early childhood, so this project became a personal mission to many. Not only would it reminisce memories, but it would be a landmark that can aid in downtown revitalization and encourage additional intel in the retail segment of downtown Tucson. Craig Samberg, director of Tucson Fox Foundation said, "We reopened back to opening night in 1930, so when you walk into the doors at The Fox Theater in 2018, you feel like you are walking back into the theater in 1930." Elements of restoration included: 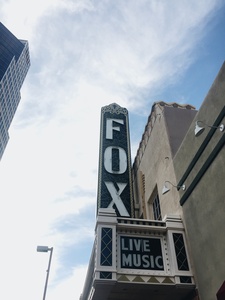 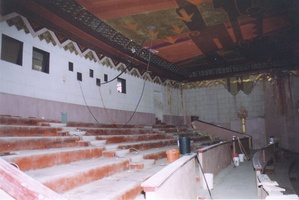 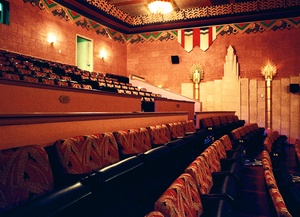 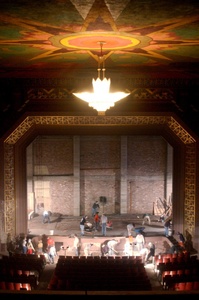 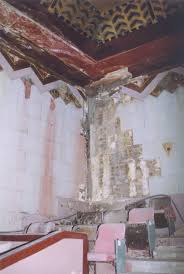 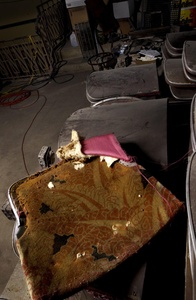 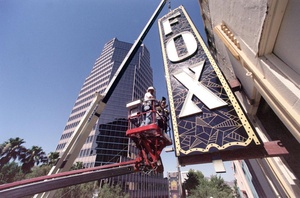 With sold out performances and a rich history, the Fox Theatre has been able to create a substantial revenue that has benefited downtown Tucson and all of its residents. The Theatre brings over $3.4 million into downtown annually, including local restaurants and bars. On top of this, the Fox Theatre has raised money through fundraising during annual events as well. The Fox approximately hosts 150-160 events each year and sees over 75,000 guests come through its doors. Having the seat capacity of 1,164 helps bring enough national and international talents with several performance venues, private events, classic film screenings, non-profit events and more. In 2013, the Fox Theater hosted over 150 events and held over 70,000 people throughout this time. In 2017, Fox patrons collectively spent over a million dollars at retails stores, lodging, arts, entertainment and recreation places, and other downtown service establishments. That is in addition to nearly $3.2 million for tickets, concessions and other expenditures (including memberships and donations).  Nearly 80% of Fox Theatre patrons visit Downtown Tucson primarily to attend events, but also visit other businesses while there, with average spending of $104.07 per party or $41.33 per person. The biggest beneficiaries are downtown restaurants and bars, which saw average spending of $68.43 per party ($27.18 per person) from Fox Theatre patrons in 2017.

During the restoration process, there were over 200 volunteers. Having volunteers help to restore the theater was a way to bring the community together. It wasn't easy volunteer work, it involved gloves, goggles, and breathing masks which is not for the faint of heart. The theatre now hosts over 100 events annually and seats more than 100,000 people a year. The Fox Tucson Theatre Foundation (FTTF) was incorporated in July 1999 and was formed for the express purpose of returning the theatre to the community. The Foundation is an Arizona non-profit organization formed out of the citizen's group known as the Fox Theatre Revival Committee, which began looking at ways to save the theater in 1997. This group was composed of people who wanted to see the theater restored, and re-opened. The stated mission of the Foundation is the purchase, restoration, renovation, and operation of the historic Fox Tucson Theatre. The Foundation is guided by a professional staff and is overseen by a volunteer Board of Directors. Due to the Fox's unique "Southwestern Art Deco" and world-class acoustics, the Fox Foundation was able to put the building on the National Register of Historic Places.

What to Know Before Your Next Visit

3. Box office (Open Tues-Fri 11am- 6pm) - hours of the box office have changed since the COVID-19 pandemic with phone calls and emails only on Wednesday's from 12pm-4pm

Where to eat dinner before the show: There are plenty of restaurants and bars in downtown Tucson that are just walking distance from the Fox Theatre such as Hotel Congress and many more. The nightlife is available for before and after the show.

Opportunities to see the inside of the Fox Theatre outside of showtimes: There are guided tours once a month offered by Tom Skinner, the resident historian. On this tour, people can learn and see things that are not available outside of these select guided tours. Private tours can be scheduled by contacting the House Manager.

Kinds of shows offered: Live music (country, jazz, rock), dance performances, as well as world renowned musicians. Over the past few years artists such as Willie Nelson and Weird Al have performed. Every month, different classic films are played to follow the tradition of the Fox Theatre as well.

Food and drinks offered: Inside the Fox Theatre, there are concession stands filled with candy, popcorn, and Pepsi products. There is also a full service bar that offers many different options for visitors. 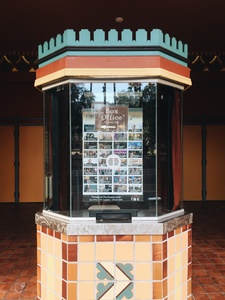 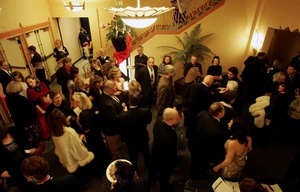 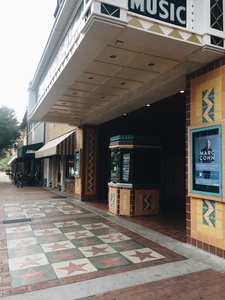 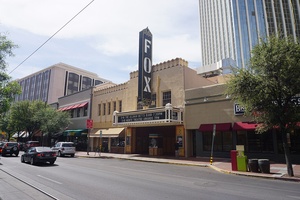 Despite the COVID-19 pandemic, the Fox Theatre remained in a stable environment without having to completely shut down the business as some other businesses around Tucson did. The first couple months of 2020 were very successful for the theatre but come March 13, 2020 the Fox theatre had to close its doors due to public health regulations. The Fox Theatre stuck with their mission-based programming during the COVID-19 crisis with high hopes of being able to reopen again in Fall 2021. In 2020, they hired their first female executive at the theatre. Had record setting sales at the beginning of 2020 until mid March. They were able to keep the core staff of the theatre in order to keep doing the essential activities needed under the extreme circumstances of COVID-19. Throughout 2020, the theatre switched to doing virtual performances ranging from many different genres. The estimated digital audience was about 75,000. From March to April 2020, they had what they called Fox Friday Nights In where they had local artists streamed into the homes of many people. Also, they had a music industry food drive and many other community service projects. With their events being rescheduled, the theatre was able to give $177,000 in refunds to those who paid for the events that were supposed to take place their during 2020. As of December 2020, the theatre is able to keep enough cash flow to cover expenses through April 2021. The theatre was also able to retain 20% overall of the staffing including 9 key members that are partially employed. When compared to 2019, the revenue for the theatre was down 72%. While they had a 35% increase in contributed revenue which went from $1,105,553 in 2019 to $1,496,780 in 2020. The theatre's operating expenses had a 60% decrease/reduction when compared to 2019. The introduction of the Shuttered Venue Operators Grant (SVOG) was expected to begin in February 2021 with the theatre possibly receiving $1.3 million in help. All in all, the Fox Theatre was able to handle everything that the COVID-19 pandemic had in store.

Information taken about the COVID-19 impact was found at: https://foxtucson.com/news/ and http://t0ppd2sptlbn17ft2d7qez16-wpengine.netdna-ssl.com/wp-content/uploads/2021/02/Fox-Tucson-THEATRE-Annual-Report_Web.pdf