"A Landmark Hotel with an Urban Charm"

Youtube Video on the preservation of history & the transition it is currently making - https://youtu.be/umj4-fVzUKw

The Hotel Congress is a highly recognizable Tucson landmark built in 1919. It was originally built by Alexander and William Curlett of Curlett and Sons, but it was later renovated by Roy Place after the 1934 fire. Appealing to an audience ranging of college students to those in their 70’s, Hotel Congress welcomes all! With such a range in diversity and fun things to do, this Hotel is undoubtedly the spot to be. Some consider this landmark to be one of the hearts of Tucson. Every nook and cranny of the hotel reveals a window to years past, from the Tap Room Bar to the colorful murals that line the walls – there is a story in every detail. The hotel strives to maintain the original ambiance from the iron bed to the vintage radio, the rumble of the nearby train to the 1930s-style phone that connects to a real switchboard at the front desk. 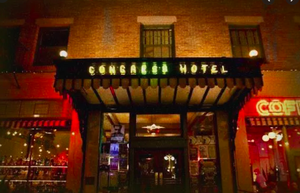 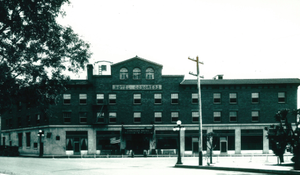 In 1934, a fire started in the basement of the hotel, which spread through to the third floor, where a gang of wanted bank robbers, known as the “Dillinger Gang,” were taking refuge under fake names. Forced to evacuate the burning building, they jumped out of their hotel window and were rescued by firemen. The gang paid the firemen to go back into the building to retrieve their luggage, but in doing so the firefighters got a good look at their faces and recognized them as the wanted bank robbers. Once police were aware of this, the gang was captured. From then on, Hotel Congress was known for being the site of the capture of famous bank robber John Dillinger.

The fire immediately made headlines and was the cause of great uproar. The Arizona Daily Star archives demonstrate an article written by J. Robert Burns during the time, Crowds Watch as Firemen Fight Hotel Blaze. The article stated, "Downtown shoppers and office workers halted yesterday morning to gather at the scene of Tucson's most spectacular recent fire as flames practically destroyed the interior of the Congress hotel building. Firemen, battling the flame from the top of an aerial ladder rig, can be seen in the smoke in the right of the picture (put down below)."

While exposing the Dillinger gang was great news, the fire itself was even bigger news. The hotel lost approximately $100,000 but guests remained unharmed. Mrs. Helga Nelson, a day clerk at the time, is to thank for the safety of the guests. She was on duty for a just a few minutes when the fire shot up from the basement. She then did not leave her telephone exchange box in order to awaken the guests despite risking her own life. This dead is continued to be recognized and nothing but pure courage.

The hotel went from having 80 available rooms to 40. 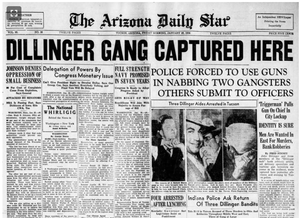 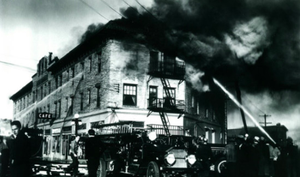 Currently, the hotel puts on events called “Dillinger Days” in remembrance of these historical events. The hotel's main website states, “Each year The Hotel Congress hosts a two-day spectacle in honor of the capture of America’s most notorious outlaw by the Tucson Police Department and the Tucson Fire Department. The festivities commence with a fundraising Speakeasy at 7 p.m. on Friday, January 22 and continue with a free family-friendly, all-day event starting at 9 a.m. on Saturday, January 23.  Gas up your speedster because all roads lead to Hotel Congress for the cultural and historical event of Southern Arizona.” The proceeds from these events all go towards The Greater Tucson Fire Foundation. 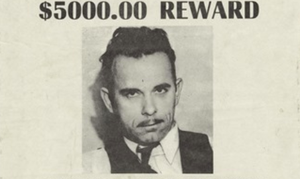 Hotel Congress was added to the National Register of Historical Places in 2003 and remains in operation today in Downtown Tucson. Its rooms don “vintage radios and antique iron beds, and feature private bathrooms and air conditioning.”

Events - Considering Hotel Congress has so much to offer, who wouldn't want to spend a fun night there! They are constantly hosting large events such as a their Nightmare on Congress Street Block Party coming up for Halloween. Guests are encouraged to dress up and have a wonderful time. 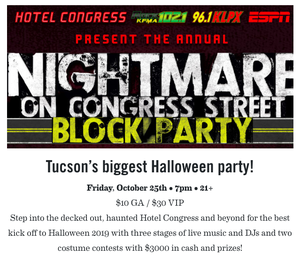 On their website you can find an endless list of the upcoming events they are hosting. People looking to have some fun are bound to find one that interests them at a small cost.

The venerable Tap Room, located inside Club Congress, has been open continuously since 1919. A longtime haven for artists and musicians, the Tap Room is a microcosm of all the things that make a bar special.

A person who makes the Tap Room or should I say Tiger's Tap Room, truly special is Thomas Ziegler aka "Tiger." Having worked there for nearly 60 years of his life, he is part of joy when one visits the local bar. Customers have nothing but positive commentary when speaking about him one stating, "There's lots of love in Tiger's Tap Room. Tiger has made this place a safe place."

Tiger believes that "Customers, are the celebrities in this bar." He has no plans of retiring and wishes to continue to put smiles on people's faces. 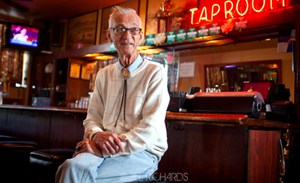 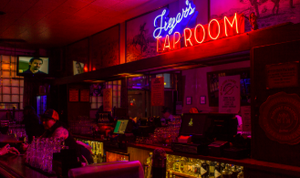 The Cup Café opened in 1990 and continues to serve food each and every day. The restaurant is highly recognized for their delicious award winning breakfast. Additionally, they are known for providing incredibly diverse entrees that tend to people's specific needs. They recently introduced vegan dishes such as, Tofu & Tamale, Beyond Patty Melt and Sonoran Sopes that are known to be as tasty as they sound!

From a historic standpoint, the food is meant to represent the culture surrounding the city of Tucson. Considering Tucson is so close to the border, Mexican and Latin flavors are fairly common in all cooking. Hotel Congress embraces the idea that Tucson brings in a variety of people and they cater to what they feel is going to make people happy. The kitchen staff is always making changes to the menu but the overall goal is to ensure they remain true to their flavors. 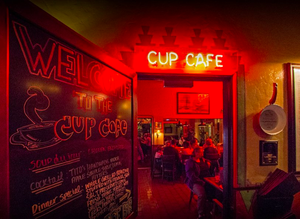 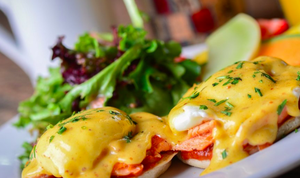 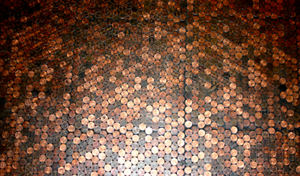 Bar Eats Menu is available only in the Lobby bar, Tap Room, and Plaza, Monday – Friday from 4pm to close and on Saturday & Sunday from 4:30pm to close

Club Rooms: Rooms are directly on top of the night club and are the noisiest hotel rooms in all of Tucson. While the beds do not have coin operated vibrators anymore, these rooms shake and rattle to the bass and bustling street all night long. The hotel offers ear plugs at the front desk but it is advised to join in on the fun because the noise is part of the experience!

Cactus Garden Rooms: Interior 1 full bed rooms facing the Cactus Garden Patio. While no room in our hotel could be called quiet, these rooms are a little less noisy and most cozy.

Exterior Rooms: Rooms facing Congress St, 5th Ave, or our Plaza. Much louder than our Cactus Garden rooms, but less earthquake-like than the Club Rooms, Exterior Rooms can still be on the noisy side due to street or club noise depending on the day. 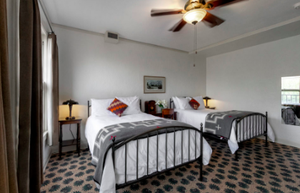 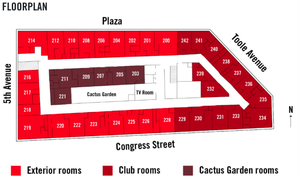 Hotel Congress changes the downtown Tucson Skyline with an addition to it iconic neon sign! 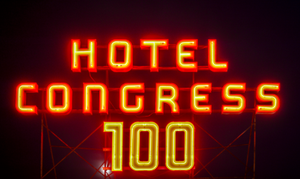