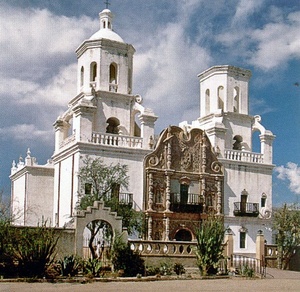 The Mission San Xavier del Bac is a national landmark located in Tucson, Arizona. It was founded in 1692 by Father Eusebio Kino as a Catholic mission. Eusebio Kino was a Jesuit explorer that wanted to spread Christianity in New Spain. It is famously known to be the oldest European structure that is still intact in all of Arizona. The interior of the building is absolutely breath-taking. It is filled with magnificent murals and statuary paintings, while the whole exterior is white stucco.

​Below is a link of the church that explores the building and explains the background:

The history of Mission San Xavier del Bac is extremely interesting. Spanish colonies were moving northward towards Mexico into what today is known as Arizona in hopes of claiming new land for New Spain. On their journey they came across a chain of missions across the Sonoran mountain range. The Mission San Xavier del Bac was founded in 1700 by Eusebio Kino. However, the mission was officially completed by Franciscans in 1797. The Franciscans were a group of related mendicant religious orders that followed the Catholic Church and were founded in 1209. The Catholic missions were a huge part with colonization. Missions created European settlements that allowed colonizations to expand and educate many on spanish culture. One of the mission sole purpose was to Christianize Native Americans at the time.

Unfortunately, there was a massive earthquake in 1987 that destroyed the main wall and many parts of the church. It wasn't until 1905 that repairs were finally taking place, by Bishop Henry Granjon. Another tragedy occurred in the mid 1900's, 1939 to be exact. Lightning had hit the West tower lantern. In 1978 many people from the community formed a group that was called the Patronanto San Xavier. Their mission was to restore the Mission San Xavier del Bac. This group still is working on the Mission San Xavier del Bac, and will not stop until it is fully complete.

Those who are interested in donating or providing help for the group, their contact information is: [email protected]

The sole purpose of this mission was to serve those in their local community. The Village of Wak, which is located on the Tohono O'odham reservation. The Tohono O'odham are a Native American people of the Sonoran region. They are located mostly in the states of Arizona and the Mexican state of Sonora. The community has about 28,000 members and their reservation is nearly the size of Connecticut, being the second largest American Indian tribe in the state. They are commonly referred to as the people of the desert and share many linguistics and cultural roots with a very close-related tribe known as the People of the River. 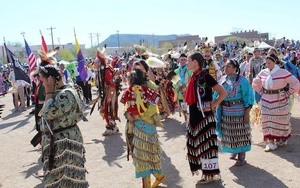 ​Important Facts to Know Before Visiting

There are a few things one should do/know before visiting the Mission San Xavier del Bac. The first thing one should do before visiting is watch the video that is played at the church between 8:00a.m and 4:30p.m. The video is approximately 20 minutes long and provides a good chunk of information on the church and its historical background. There is also an option to light a candle at the church, the candles are available in the gift shop for only 3$. This could be a fun idea if one is bringing their family and have kids. There is also Indian Fry Bread that is regularly sold outside in the parking lot. Everyone who has boughten the bread makes it known that one should not miss out on this opportunity. The only day the bread is not sold is on Monday's. 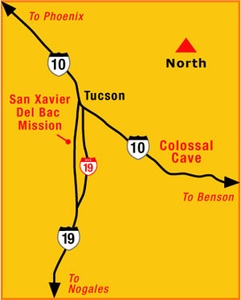 The location of this extravagant landmark is 9 miles south of downtown Tucson. It is right off interstate 19. Fortunately, there is no admission charge to visit the Mission San Xavier del Bac, and is visited by nearly 200,000 people each year from all over the world.