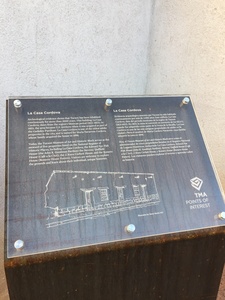 La Casa Cordova is known as the oldest adobe home in downtown Tucson. It is located in the historic Presidio neighborhood and is an exhibit at the Tucson Museum of Art. The Historic Presidio neighborhood, “The El Presidio Historic District is a residential neighborhood containing adobe and brick buildings in the Spanish-Mexican, Anglo-American and Eclectic architectural styles. Named for the Spanish-built Presidio de San Augustín del Tucson (1775), El Presidio is one of the nation's oldest inhabited sites.”[1] La Casa Cordova gets its name from the last resident of the home, Maria Navarrete Cordova. The Cordova family attained the building in 1936 and lived in it from 1944 until 1973. “The Cordova family believed the original part of their home was constructed when Tucson was a village in the Mexican State of Sonora.”[2] 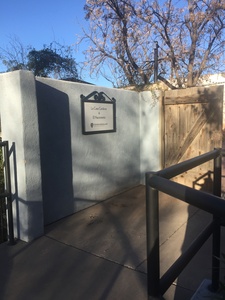 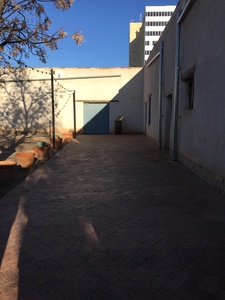 “Some historians believe that the original rooms may predate the Gadsden Purchase of 1854. The acceptance of an early date of construction is based on the fact that the oldest portion of the building, the two back rooms on the south side, appears on the earliest known map of Tucson, the 1862 Major D. Ferguson map.”[2] The Gadsden purchase, “The Gadsden Purchase, or Treaty, was an agreement between the United States and Mexico, finalized in 1854, in which the United States agreed to pay Mexico $10 million for a 29,670 square mile portion of Mexico that later became part of Arizona and New Mexico. Gadsden’s Purchase provided the land necessary for a southern transcontinental railroad and attempted to resolve conflicts that lingered after the Mexican-American War.”[3]

“There are many uncertain claims about the true age of La Casa Cordova and its inhabitants before the Cordova family’s occupation of the home. According to Maria Cordova, her family attributed ownership of the property to as early as 1848, when her great uncle Manuel Carrillo built the house. Carrillo inherited the land upon which the house was constructed. Maria Cordova’s story cannot be proven, and her son spent years attempting to prove his mother’s claim of occupancy through the Spanish land grant. It was dismissed in court. There are no records of the estate of information on Carrillo before 1877.”[4a]

“The property was leased by the city of Tucson to the Tucson Museum of Art in 1973. The house was restored by the Junior League of Tucson, Inc. in 1975. After extensive research, the Junior League decided to restore the back two rooms of La Casa Cordova. They based their decision on Maria Navarrete’s story, as well as on the possibility the two-room structure existed in 1862. A view of the south wall in an 1885 photograph clearly indicates that the back two rooms were constructed at an earlier date.”[5]

It should be noted that La Casa Cordova exhibit is also shared with what is known as El Nacimiento. When entering the property there is a brick pathway that leads to the entrance of the exhibit. Walking into the first room directly to the left there is the largest and longest-running nativity scene in the southwest called El Nacimiento. The installation is a collection of miniature figurines depicting scenes from the bible. “Many of these scenes show stories from the old testament as they might have occurred in a Mexican village, which creates a unique tie between the religious observance and daily life in rural Mexico.”[4b] 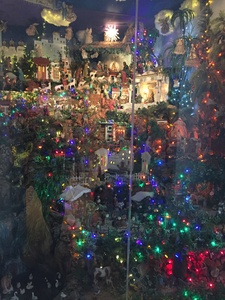 After taking a look at El Nacimiento, off the entrance room to the right is La Casa Cordova Display. There is a film that includes the Cordova family narrating their story and history of the neighborhood and the home. You can see displays of old pictures and newspaper articles as well as old mappings of the area. In one of the pictures you can see how the home was a smoke shop. “In one of the front rooms the family operated a business, Known as Cordova Brothers Smoke Shop, from 1952-1971. The smoke shop was well known in the community and there was strong sentiment for the continued use of the Cordova name.”[5] 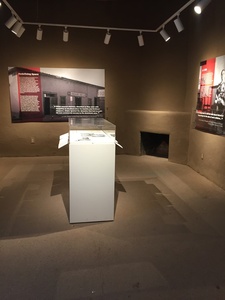 The front of the home is accessible to anyone, but if you would like to see the interior, you will need to pay the museum entrance fee.

The second Sunday of the month is free for residents of Arizona and Sonora, Mexico courtesy of the Stonewall Foundation.

The Museum is closed on Mondays.