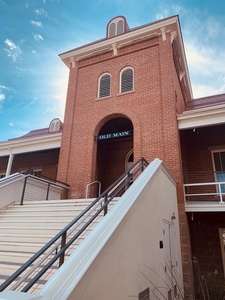 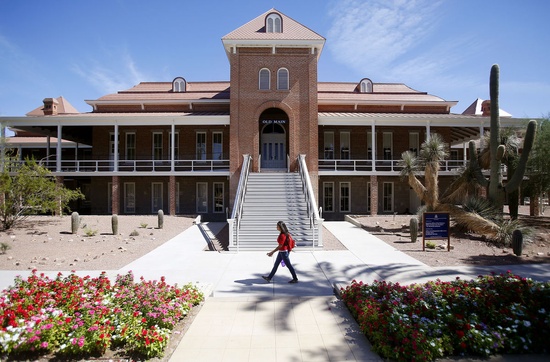 Forty acres of land were purchased by two professional gamblers and a saloon owner in 1886. This land then became the site of the University of Arizona. On October 27, 1887, Phoenix architect, James Miller Creighton was paid $500 and began the construction of Old Main, the university’s first building on its campus. After Creighton exhausted the small budget of $37,969, he sought out federal loans to complete the project. At the time, federal loans were only granted for agriculture buildings, so Creighton renamed the building from the "School of Mines" to the "School of Agriculture". After construction was complete, Old Main opened its doors for the University's first class on October 1, 1891. Because Old Main was the only building on campus at the time, it contained a library, offices, dorm rooms, and classrooms. Only six faculty members taught thirty-two students that year. Students rode their cow ponies to class and tied them up to posts near Old Main while they were inside. The building was built with bricks that were made on-site and stones that were from a quarry south of Ajo Road. Old Main was placed on the National Register of Historic Places in 1972 and is one of the oldest surviving educational structures in the western United States.

In 1919, the Alexander Berger Memorial Fountain was built in front of Old Main. This project emerged to remember thirteen University of Arizona students who were killed in World War I, including Berger's nephew. On January 31, 1920, the Berger Memorial fountain was dedicated among students, faculty, military, and the Tucson community to the lives that were lost. This fountain remains one of the most exclusive elements of the University's campus. 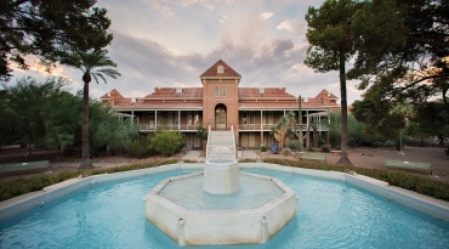 Due to neglect by the University, Old Main began to deteriorate and was ultimately condemned by the City of Tucson in 1938. After it was declared unsafe, Old Main remained vacant for a period of time. There were several proposals and arguments for demolition, but it was decided by the Superintendent of Buildings and Grounds, Billy Bray, that it would cost more to demolish it than to let it remain vacant. This was when the United States Navy took matters into their own hands. In 1942 they repaired the building to create a Naval Indoctrination Training School during World War II. In 1945, the Navy paid $20,000 to transform it back into a campus facility.

One hundred and twenty-two days after Old Main opened its doors to students, University of Arizona president, Ann Weaver Hart, and the University of Arizona's Foundation President, James H. Moore, put into motion a $13.5 million dollar fundraising campaign for a full renovation of the building, which they named "Save Old Main". Hart and Moore launched this campaign to preserve the building for future generations to come. They argued that this building is a visual reminder of the University of Arizona's commitment to higher education, leading scholars, and high rankings both nationally and internationally. Plans for renovation addressed the damaged foundation and exterior veranda, general decay, moisture damage and cracked masonry columns, ventilation, heating, cooling and fire protection systems. Following the renovation, Hart and Moore shared that they wanted Old Main to be a place for past and present Wildcats to come together in celebrating the university’s history and culture.

OLD MAIN: "THE HEART OF CAMPUS"

In 2008, the first floor of old main was repaired and renovated for a costly $4.6 million. This building contained the University's Office of Admissions, the Center for Exploratory Students, and the Dean of Students Office. In January 2013, Old Main experienced a full renovation including reframing of the porch, replacement of the roof, and modernization of the building as a whole. Additionally, the Office of the President was relocated to Old Main. The patio and porch areas are popular places for socializing, enjoying lunch, viewing mall activities, and taking graduation photos. Old Main has become a symbol of history, traditions, legacy, and success. The building has emerged as a fundamental symbol of success on the University's campus, several academic distinctions, homecoming events, and alumni gatherings have taken place on the steps of Old Main. Additionally, tours for prospective students begin in the building and place an emphasis on the history of the building. Almost every graduate of the University has taken a photo on the steps of Old Main as it symbolizes four years of success and higher education. It is the place where their collegiate journey began during their tour and it is where they celebrate their achievements at the end through graduation photos. The historic building has emerged as "the front porch of the University" and "the heart of campus" for students, faculty, alumni, and the Tucson community at large. The beautiful red brick building and the grand fountain before it are surrounded by vibrant flowers, lush greenery, and cacti of course. As one enters through the front gates of camps on University Boulevard, Old Main is impossible to miss. 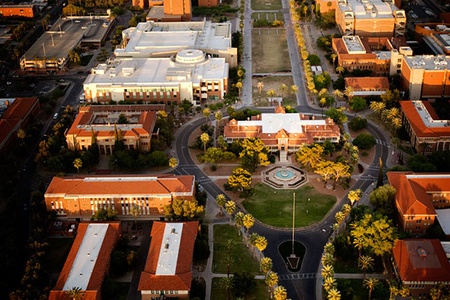 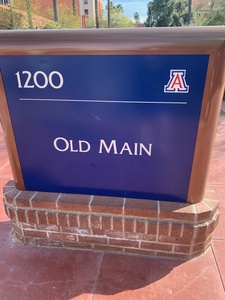 Old Main houses some of the most important offices at the University of Arizona. On the top floor of the building, you will find the President’s office and many conference rooms. Different kinds of art and artifacts throughout the building give it a museum-like feel. Down the stairs, on the main floor is the Office of Admissions. This office is the headquarters for all things having to do with prospective students and incoming Freshman. This is the meeting point at which they give tours to prospective students and explain what the University of Arizona is. 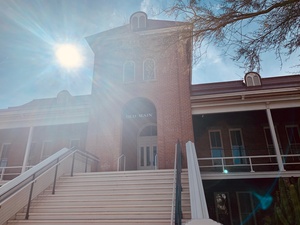 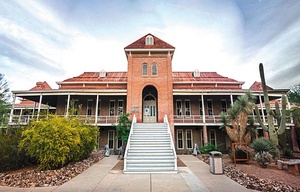 In the year 2015, Tucson Business published an article regarding The University of Arizona Old Main building. A design building team known as Sundt Construction, Inc. managed to receive three awards. These awards were recognition in regards to the renovation of the Old Main building. This building is the second oldest occupied building in Arizona. Two awards were given from the Arizona Preservation Foundation. Another award was given from the Design-Build Institute of America Western Pacific Region. The Arizona Preservation Foundation along with the Arizona State Historic Preservation Office/Arizona State Parks, picked Old Main to win the 2015 Grand Award. This award was presented on May 15 at the Governor's Heritage Preservation Honor Awards. This was located at Northern Arizona University's Du Bois Center in Flagstaff. This award recognizes people, organizations, and projects that display amazing achievements in preserving Arizona's prehistoric and also historic resources. Old Main also was recognized with the Award of Merit during the 2015 DBIA WPR Annual Design-Build Awards Competition Dinner. This took place on May 21, 2015 at the Newport Beach Marriott in Newport Beach, California. This was a 9.7 million dollar project. The goal for this project was to rehabilitate the building interior, and simply bring the building back to life. Many renovations took place. This included restoring the entire second floor, "The work included stabilizing the perimeter stone wall, resolving subterranean water infiltration, reinforcing the brick columns and chimneys, reconstructing the second floor porch, upgrading and leveling the second floor structure, replacing metal roof shingles, and rebuilding the second floor interior for use as the office of the University president. Other features included safety upgrades, installation of a new mechanical system, and replacement of the plumbing, lighting and electrical systems. " This renovation restored Old Main to it's former glory. "This award belongs to the entire design-build team, including the subcontractors, who brought with them critical expertise in landmark building that ultimately led to the success of the project,” said Sundt senior project manager Fred Briscoe. “Because of the hard work and effort put into this rehabilitation, Old Main will remain the centerpiece for the UA campus for many years to come.”

OLD MAIN IS STILL AN ICON AFTER 128 YEARS 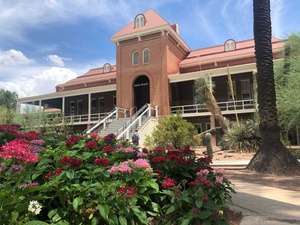 In August 2019, Pat Parris and Brooke Long published an article discussing the building of Old Main. This article discussed how The University of Arizona Old Main building has remained an icon after 128 years. This article was also accompanied by a video that was aired on Tucson Channel 9 News. Even after hundreds of years the building of Old Main remains the heart of the University of Arizona campus. The building of Old Main serves many purposes. The general public is able to view and tour inside the building. University of Arizona students are able to find the office of the President located in Old Main. Students are also able to find resources regarding enrollment and new student information inside Old Main. This historic building is a significant landmark on campus. Old Main is utilized for Homecoming every year. The building will illuminate colors of red and blue to signify the University of Arizona homecoming. Old Main is utilized as a famous meeting spot. Many students and tour groups will choose this as a landmark to meet. Old Main also serves as a great photo backdrop. Every year many graduating seniors will take their graduation photos in front of this historic landmark. What better way to capture graduation memories in front of the building where it all started. 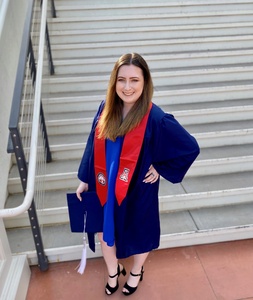 According to the Arizona Daily Star, Phoenix architect James Miller Creighton was paid $500 to design Old Main. The building featured high ceilings and shaded porches to fight Tucson’s high temperatures. The stone used in the construction of the building came from a quarry south of Ajo Road and bricks were made on-site. Creighton, from the 1880s practiced in the Phoenix area and was known as one of Arizona's first architects. When Old Main was built first in 1886 students would ride horses to class, they'd tie their horses to hitching posts outside the building. 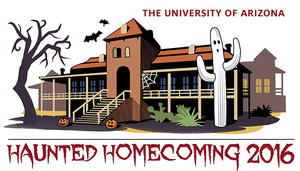 "He doesn't stand still long enough to take a picture," Avilez said. "He kind of hides."

Carpenter Frank Contreras also has been spooked by the ghost story.

After hearing Avilez and other colleagues talking about Carlos, he went online to do some investigating of his own and found the tale.

Not long after, he arrived at Old Main early one morning, the first one on the site. When he entered an upstairs hallway, several faucets suddenly turned on at once, sending him in the opposite direction." 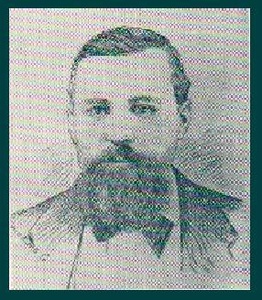