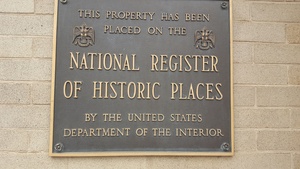 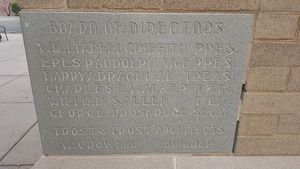 The Scottish Rite Cathedral is located in downtown Tucson at 160 South Scott Avenue. It is surrounded by other historic buildings such as the former City of Tucson/Pima County Public Main Library (now the Tucson Children's Museum located at 200 South Sixth Ave) located to the East of the cathedral and the Owls Club Bar (which was formerly Brings Funeral Home located at 236 South Scott Avenue) located to the south of the cathedral. The building’s cornerstone was laid December 8, 1915 and the building was officially dedicated sometime in 1916. An addition to the cathedral sometimes called the “Peter Howell addition” was added in 1951. Peter Howell was the Venerable Master of the local Freemasons from 1911-1912.The property where the addition was built had historical significance at the time of dedication as it was the only place in Arizona where a United States president had stayed. That president was Rutherford B. Hayes. In 1979 the entire building was put on the National Register of Historic Places, which is a United States Department of the Interior listing of places that are worthy of preservation.


The cathedral stands out in Tucson due to its classic and interesting architecture and because it is home to the Freemasons. The Freemasons are sometimes categorized as a secret society consisting of many men who are noteworthy contributors to politics, finance and entrepreneurship. No one knows with certainty how or when the Masonic Fraternity was formed. A widely accepted theory among Masonic scholars is that it arose from the stonemasons' guilds during the Middle Ages. The language and symbols used in the fraternity's rituals come from this era. The oldest document that makes reference to Masons is the Regius Poem, printed about 1390, which was a copy of an earlier work. In 1717, four lodges in London formed the first Grand Lodge of England, and records from that point on are more complete. Within thirty years, the fraternity had spread throughout Europe and the American Colonies. Freemasonry became very popular in colonial America. George Washington was a Mason, Benjamin Franklin served as the head of the fraternity in Pennsylvania, as did Paul Revere and Joseph Warren in Massachusetts. During the 1800s and early 1900s, Freemasonry grew dramatically. At that time, the government had provided no social programs. The Masonic tradition of founding orphanages, homes for widows, and homes for the aged provided the only security many people knew. Today in North America, the Masonic Fraternity continues this tradition by giving millions to causes that range from operating children's hospitals, providing treatment for childhood language disorders, treating eye diseases, funding medical research, contributing to local community service, and providing care to Masons and their families at Masonic Homes. It is estimated that there are currently four million Masons worldwide. The Scottish Rite Creed is “Human progress is our cause, liberty of thought our supreme wish, freedom of conscience our mission, and the guarantee of equal rights to all people everywhere is our ultimate goal”.


The architecture of the Scottish Rite Cathedral is unlike many buildings in Tucson. It is tall with impressive columns and beautifully detailed carvings (see photos). The beauty of the building is timeless. The building can be rented out for weddings, plays, business meetings or other events. It’s “red room” boast of full stage and portions of the building have hand carved thirty five foot high ceilings. The entrance to the cathedral has marble steps and its entry room has Frank Lloyd Wright inspired décor and furnishings. There are two halls for dining is an Ochoa room for smaller groups and Atchley Hall for groups up to 350 people. The building boasts over 15,000 square feet of event and meeting space to accommodate groups from five to five hundred.
Most of the the information in the article was provided by the Scottish Rite Cathedral website which can be found at: http://tucsonscottishrite.org/ 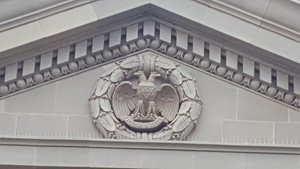