The Historic Pima County Courthouse was built in 1929. The iconic landmark is located in the heart of downtown Tucson at 115 N. Church St. It was designed by Roy Place and has a Mission Revival and Spanish Colonial Revival style with Corinthian colonnades, pink stucco, and red clay roof tiles. It is 87,000 square feet. It has 10 courtrooms and one jury deliberation room that doubles as a staff conference room. After it was completed in 1929 it housed the sheriff, his deputies dormitory, the jail and a library for storing records. It cost around $300,000 and was paid for with county bonds.

Place was a local architect and designed the Cochise County Courthouse and also 25 buildings at the University of Arizona.

From 1930-1977 it housed the Pima County Superior Court and from 1977-2015 the Pima County Consolidated Justice Court. As of 2015, the main county's courthouse, the newer, more accomodating Pima County Consolidated Justice Court is located nearby at 240 N Stone Ave. while the original, historic one is no longer in use. In 2013 County Administrator Chuck Huckelberry told the Arizona Daily Star lesser impact use of the courthouse will help preserve its historical integrity.

The Courthouse was listed in the National Register of Historic Places in 1978 where is was described as “the most outstanding Spanish Colonial revival building in Arizona.”

It is featured and highlighted on many travel lists as a must see sight to see in Arizona. It even served as inspiration to the temple of The Church of Jesus Christ of Latter Day Saints i front of the Catalina Mountains.

In 2016 in was announced that the historic Courthouse is being renovated for the first time since 1954 when a south addition was made to the building. It was estimated that it would as much as $25 million. Over seeing the renovation project is Pima County director of facilities management, Lisa Josker.

One of these renovations included painting the building from its noticable pink stucco to its original earthy adobe color. It was originally painted in the earthy shade but its famous pink facade is the result of fading from the Arizona sun. They discovered the original color inside the building from part of a door jamb that hadn’t been exposed to sunlight for almost a century. Painting the building its original color is part of the goal to restore the integrity of the architects and county’s intent back in 1929 according to Lina Mayro, director of the Pima County Office of Sustainability and Restoration.

Another planned renovation is turning the ground floor into an expansion of the Tucson Museum of Art.

The Courthouse will serve as a museum, visitor center and memorial to celebrate the building’s history, including the room that held the trial of infamous bank robber John Dillinger in 1934. This room would likely be used as a space for meetings and ceremonies according to Huckelberry.

There are also plans to make a memorial in the building to commemorate the shooting that took place in Tucson in January 2011 involving Representative Gabby Giffords. The memorial would be located on the west side of the building in El Presidio Park on West Alameda Street. In March of 2018 it was announced that funding for this project fell short, reung the sizeof the memorials plan.

Other tenants of the renovated building will be the University of Arizona Gem and Mineral Show, and Visit Tucson which signed 15 year leases for $6.5 million and $5.4 million, respectively. These leases were approved by the Arizona Board of Regents in April of 2018.

In March of 2018 it was announced that the complete renovations and memorial will be completed by January of 2020.

One judge, Judge Lillian Fisher took the bench of the Pima County Superior Court in 1975 her chambers were a small closet in the Courthouse. She recalled doing research alongside brooms and mops when she went to share recollections of the courthouse for a project documenting the building's history. 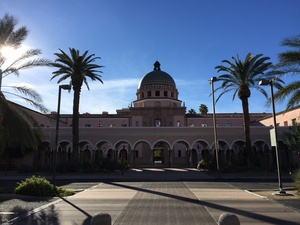 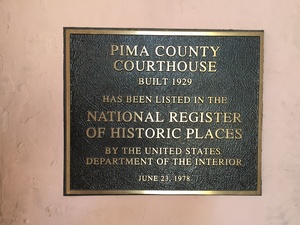 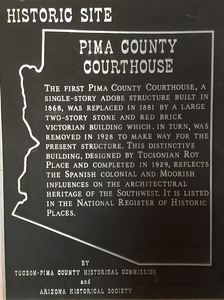