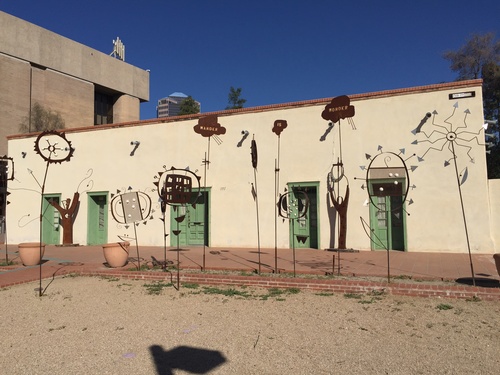 The Sosa-Carrillo-Frémont House is a historic adobe house built in the 1870’s. It is one of the oldest buildings in Tucson located in the downtown area and was built following the incorporation of Tucson in 1871 by the Government Land Office and the development of city blocks (1). Its one of Tucson's oldest buildings and serves as a prime example of Sonoran and Territorial architecture. Sonoran architecture is suited to the desert temperatures with thick adobe walls that allow these types of homes remain habitable despite the extremes in temperature changes (8) . The house has a rich history with some of Tucson and Arizona's earliest and most prominent pioneers and is named after three of the homes most prominent residents. The home was almost destroyed due to urban development and urban renewal but the Tucson Heritage Foundation and Arizona Historical Society successfully fought to have the home historically preserved. (2.) Today, it serves as a museum that features the same internal structures and items that would have been present when it was first built and remains free for the public to visit. The museum showcases what life and culture were like 19th century Southern Arizona and the rich history of some of the home most prominent residents. (3.)

The home was built in the 1850’s by Jose Maria Sosa. "Sosa was a descendant of Presidio pioneers when Tucson was colonized by the Spanish." (4.) The original Jose Maria Sosa died in 1800 after serving for 29 years as a presidio officer with his ancestors José María Sosa III building this household (9). Today, there are over 200 Sosa descendants who celebrate the lives of their great grandfathers legacy (9). The Sosa family sold the home to Leopoldo Carrillo in 1879. Mexican American Studies professor Lydia Otero from the University of Arizona writes this about Leopoldo Carrillo, “An entrepreneur, he owned more than one hundred properties, and built the city's first two-story office building. He was best known for capitalizing on the desert locals' desire to luxuriate near water. He built Carrillo Gardens, where natural springs provided enough water to allow visitors to luxuriate in greenery and sail small boats.” (5.) 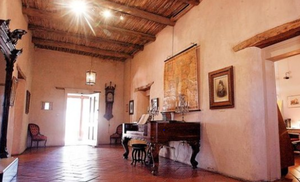 Leopoldo Carrillo’s family and descendants would occupy the house until 1968 when Leticia Jacobs Fuentes, Leopoldo'sgranddaughter was forced to move out when the city acquired the property through the power of eminent domain. Carrillo’s family leased the home to John C. Fremont from 1880-1881. John C. Fremont is a controversial historical figure was an explorer, US military leader, and Territorial governor of Arizona. Fremont relationship with the home has been a source of debate and skepticism. (5.) Some historians believe that Fremont had never even lived in the home or even spent a night there. (6.) “In 1992, Heritage Foundation no longer claimed that Fremont ever lived at the house but claimed that "it was crystal clear that John C. Fremont leased the structure, that he was Governor of the Territory of Arizona at the time it was leased, it was used as a residence for his daughter.” (5.) The house was officially named the Sosa Carillo Fremont house in 1992 to accurately describe the occupants of the home (9). There is no evidence that Fremont had spent any time at the home. Tucsonans had always known and referred to as the house as the Carrillo House. This changed when, "In 1958 the Arizona Daily Star reported the Fremont connection. The headline read: "A Busman's Holiday: Newsman Re-Locates General Fremont's Old Tucson Home.” Sosa, Carrillo, and Fremont families are all important figures in the history of 19 century southern Arizona." (5.) There was controversy surrounding the naming of The Sosa-Carrillo-Frémont House. When the Arizona Historical Society bought the house they applied for the house to be apart National Register of Historic Places. "On the application for nomination and eventual placement on the National Register, the site was listed as the "Carrillo-Fremont House." After numerous closed door and unmonitored conversations, Sidney Brinckerhoff AHS director, managed to get the Carrillo name deleted. The house was formally accepted and entered into the Register as the "Fremont House" on June 3, 1971.”(5.) The home being labeled as the "Fremont House" in 1971 garnered a large amount of criticism from the community. People felt naming the house only after John C Freemont marginalized and excluded the Mexican American history of the house. Lydia Otero writes, “Most who saved the house felt defensive and under-recognized, while the descendants of those who lived in and built the house remained angry. Leticia Jacobs Fuentes and other Carrillo descendants laughed when they heard their former home called the "Fremont House." They said it was the least unimportant factor in the home's history." (5.) Community members asked the board members of Arizona Historical Society to change the name for years. Tucson-Pima County Historical Commission made a request to the Arizona Historical Society where they said, “In the interest of historical accuracy, a correction in the naming of the house in question from the John C. Fremont House to Sosa-Carrillo House.” (5.) After years of debate and discussion surrounding the naming of the house, the Arizona Historical Society changed the name from “Fremont house” to the “Sosa-Carrillo Fremont House” in September of 1992. The Fremont name was put last in the renaming intentionally. (5.) 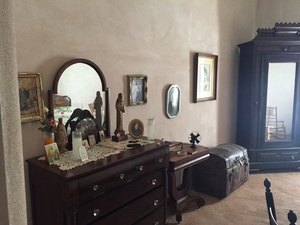 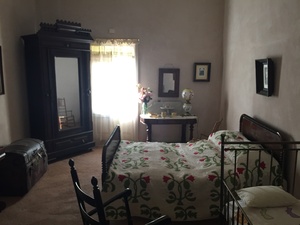 The Sosa-Carrillo-Frémont House was renovated and the museum exhibit reopened in 2015.(6.) In March of 2017 Borderlands Theater moved its headquarters into a section of the house. The Sosa-Carrillo-Frémont House is shared between the Arizona Historical Society and Borderlands Theater. (7.) The Sosa-Carrillo-Frémont House Museum provides the public with a way to experience what life was like in the 1870’s in Tucson. The museum has attempted to recreate how the house looked during the 1870's. The house is filled with future and household items from the 1870’s. There is also a large amount of historical information on display about the Sosa, Carrillo, and Fremont families. The museum occasionally puts on special exhibits. There is also a small museum gift shop. (7.)

The Musuem today functions as a historical building in addition to an event space for local residents. The Sosa-Carillo-Frémont House is located at 151 S. Granada Avenue, on Congress St. and Granada Avenue.

(5.) Otero, Lydia R., and Karen Anderson. Conflicting Visions: Urban Renewal, Historical Preservation and the Politics of Saving a Mexican Past. 2003.