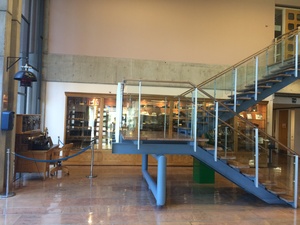 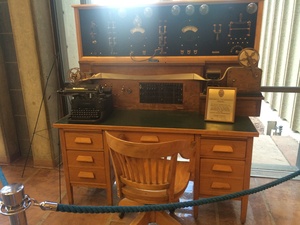 The Tucson Police Department at 270 S. Stone Ave has a small, informative and interesting historical site right inside the station. A Police Officer will let you in the main door which opens to a lobby with a seating area and a wrap around stair case leading to some other offices and conference rooms. On the other side of the stair case, however, tucked away in the corner is a modest; yet fascinating collection about the history of the Tucson Police Department. The collection is mainly personal items donated by Officer Tony Cox, Retired. He is also the custodian of the collection and always looking for more donations to add to the display. The items are sort of random and may not be an area of interest for all viewers. It's a place of reflection for today's officers as well as touring school groups and an interesting area to explore if waiting in the lobby area for any reason.</div>

There are four, double-wide cabinets with sliding glass doors that showcase the display of historical artifacts dating from the 1920's to current. The glass cases are locked and can not be opened to the public for closer viewing with the possible exception of making an appointment with Officer Tony Cox, Retired. Not much information or details is given about the items. There are some name cards with dates and the officers on duty can answer several questions you might have. The collection is mainly just for viewing, not so much informational.

The most interesting bit of history in the collection are several pictures, weapons, arrest reports and other historical artifacts about the arrest of John Dillenger and gang. John Dillenger was arrested in Tucson, Arizona making him like the Al Copone of Tucson. A whole Dillenger display is shown with a sign commenting that "THIS  IS THE DISPLAY, AS IT WAS SEEN IN THE LOBBY OF THE PIONEER HOTEL DURING POLICE WEEK, MAY 1962. THIS DISPLAY COMMEMORATED THE 1934 CAPTURE OF THE NOTORIOUS BANK ROBBER AND HIS GANG IN TUCSON." Some other artifacts from Dillenger's arrest include: a picture of Chief of Police "Gus" Wollard and the officers of Tucson Police Department in 1933, weapons used by the Dillenger gang, arrest report, wanted posters, and a picture of the house John Dillenger was found sitting on the front port when he was arrested located at 927 North 2nd Avenue.

Also on display next to the four glass cases is a roped-off, 1920's police station desk set with police telegraph used from 1928-1960. An interesting fact about the set is posted on a plaque that reads: "THE GAMEWELL CALL BOX SYSTEM WAS PUT INTO OPERATION FOR THE TUCSON POLICE DEPARTMENT AROUND 1928 AT A COST OF APPROXIMATELY $22,000. THIS INCLUDED 17 GAMEWELL CALL BOXES AND 19 LIGHTS, CALLED FLASHLIGHTS, AND THE MAIN GAMEWELL RECEIVING STATION LOCATED WITHIN THE OLD POLICE STATION AT MYER AND ALAMEDA. TO USE THE CALL BOX A LARGE KEY WAS REQUIRED TO OPEN THE DOOR, THEN THE LEVER IN THE TOP CENTER OF THE BOX WAS PULLED DOWN. THIS WOULD SETOFF THE TICKER TAPE AT THE MAIN GAMEWELL AND TELL THE DESK OFFICER THE NUMER OF THE CALL BOX CALLING IN. HE WOULD THEN FLIP A TOGGLE SWITCH TURNING ON THE PHONE LINE, AND THIS WOULD ALLOW CONVERSATION BETWEEN THE TWO PARTIES. IF THERE WAS A NEED FOR THE DESK SERGEANT TO CONTACT A FIELD OFFICER, HE WOULD TURN ON THE 19 FLASHLIGHTS WHICH WERE LOCATED THROUGHOUT THE CITY. THE FIELD OFFICER, UPON SEEING THIS, WOULD GO TO THE NEAREST CALL BOX AND CALL THE STATION, AND IN TURN WOULD BE SENT ON THE CALL. THE CITY OF TUCSON AT THE TIME THE CALL BOXES WERE INSTALLED WAS ONLY 7 SQUARE MILES."