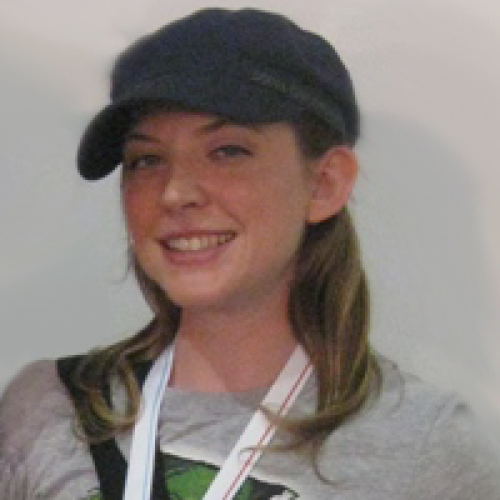 I am officially UCD alumni!! I majored in Physics and minored in Education (in case I decide to be a teacher). I transfered from American River College in Carmichael, CA in Fall of 2005.

» My most recent employment history:

Fall '06 ~ Spring '07 I was a computer janitor for the Sociology department. I really hate Thinkpads.

Fall ]05 ~ Summer '06 I worked in the Student Disability Center in the South Silo. I was the first official E-text Technician, or whatever you want to call it. I bascially scanned books all day. I also drove the awesome SDC golf cart that gives rides to students who aren't capable of walking to class in a reasonable amount of time.

So let's say, hypothetically, you need to get in touch with me. Here are three likely ways of doing so:

I love music of all kinds. I bake really yummy cookies. I like to sew costumes and make fancy pillows. I can draw certain things, mostly planets and twiddle bugs. I thrive off of coffee and Bawls. I have about 12 years of child-care experience because I adore children just that much. I admit to loving Trading Spaces, only because I love interior design. Oh, I hate my hair.

I'm a big sci-fi nerd and have been since I was a 1 year old. I am beyond "fanatic" when it comes to Star Wars. Some say this is odd since I am a physics major, but it has nothing to do with physics! I saw Return of the Jedi when I was 1, not that I remember, but it definately was a major part of the sci-fi infested childhood that I gew up in. I fell in love with Astronomy at the tender age of 7 when I viewed the moon through a gun sight. I preferred watching Cosmos instead of Sesame Street. I used to get up at 6am before school so I could watch The Lone Ranger when I was 6.

I like to quote things, be it movies or television shows. "I've seen the Exorcist 167 times, and it keeps getting funnier every single time I see it!" Growing up, my lil sis and I watched particular films many many many times, to the point that our conversations are almost made up completely of quotes. "What about the twinkie?"

I practiced Kosho Shorei-Ryu Kempo for about 5 years (spread out from 1994-2002). Four of those years was spent at Garrett's Kenpo Karate(a chinese version of Kempo) in Orangevale. The school was owned by Gary Garrett and his family. I went on martial arts hiatus after earning my rank of Jr. 1st Brown(3 stripes), and eventually stumbled upon a small school somewhere else in Orangevale. It belonged to a man named Bruce Juchnik. Little did I know, he was one of Gary's old masters along with Ed Parker Sr.(eew). Bruce Juchnik holds the title of Hanshi, or "root master", for the KSRK community all over the world. Because of him, I had the fortunate experience to attend The 2002 Gathering, a national martial arts convention. This experience has taught me why such a sport is referred to as "art".

Being the social butterfly that I am, I spend a lot of time chatting it up on the famous internets of yore. I am most commonly on gAIM throughout the day and I peruse forums in the evening. Here is a list of my favorite places to waste time:

Growing up, I have lived amongst dogs, cats, turtles, and even a duck. I adore animals of all kinds (No Mike, spiders are not animals! They are vile arachnids!!). Here are my currently living pets:

I have lots of old projects that either failed the process of natural selection, or I just got lazy and never bothered to finish.

I like most music out there. I have realized lately that I don't listen to much of the modern music these days. I keep a constant rotation of Queen, The Beatles, Depeche Mode, NIN, Johnny Cash, et cetera et cetera. I've been recently indoctrinated to bands such as The Postal Service and I must say that I am quite happy.

My favorite kind of music is that of the silly variety. It's also undoubtedly how I like my internet. I hope to eminate pure sillyness one day.

Stuff for your entertainment: