Your ancestors, Elizabeth Gould Cowley (1811-1855) and Richard Champion (1809-1883) were born at Lambourn, Berkshire, England and married there in 1829.  That was about twenty years before the time of an Anglican bishop called Robert Milman.  His sister wrote in his biography that Lambourn was ‘one of the wildest and most neglected parishes in the diocese of Oxford.’  Robert did a great deal to reform the parish helping to build schools and starting evening classes.

Lambourn was an important market town long ago and it is famous today as a centre for horse racing in England and historically because King Alfred (about 800 AD) may have been born there – it is mentioned in his will.

Elizabeth was an illegitimate child born to Hannah Cowley. 1  Family legend tells that a girl, presumably Hannah Cowley, worked for the squire.  She became pregnant to his son, who couldn't or wouldn't marry her.  So, Hannah gave his surname, Gould, as a second given name to the child, who we believe was Elizabeth Gould Cowley.  In 1821 Hannah married William Chandler. 2  Descendants believe this is Hannah’s family tree. 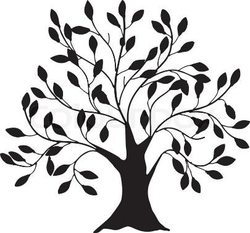 Richard’s occupation was recorded as ‘labourer’ when he emigrated onboard the ‘Trafalgar’ from Plymouth in December 1849.  The register states that he and Elizabeth were both 37 years old, but they were 41 and 38 respectively – perhaps quite old by emigration standards.

There were about 300 government assisted passengers onboard including Richard and Elizabeth’s children, Margaret (13); Louisa (10); and Ada (7).  Their son, Alfred (19) and his wife Phoebe Champion (nee Praten), were also onboard. 4  But the ship’s passenger list notes that the number of children was incomplete.

The listing (left) which appeared in The Adelaide Times on 1 April 1850 differs from the passenger list with extra names, Ann and Richard.  The stated names also differ, but it was usual to call a child by a second given name, for example the couple’s daughter, Margaret (Emily) was known as Emily and Lydia Ann may have been known as Ann. 5

The ‘Trafalgar’ arrived in Adelaide on 30 March 1850.  Tragically, there had been 17 deaths en route.  According to ‘The Adelaide Times’ on Monday 1 April 1850, 14 of the deaths were young children.  They died as a result of exhaustion from seasickness; dysentery; whooping cough; lesion; inanition; premature births; diarrhoea, typhus fever and even eating part of a blister which had been applied to the nape of the neck!  It was the voyage from hell!  And much worse than current-day shipboard outbreaks of the Coronavirus!  One can imagine a mother's dilemma confined below decks with young children in the stagnant space, with the contagious whooping cough, dysentery and typhus on board.  Inanition is starvation from lack of food and the intense heat crossing the equator could have led to the death from diarrhoea.

Onboard were eight cabin passengers. Their journey was so much more comfortable.

Here is an extract from the writings of Andrew James Pollock 6 who emigrated as a cabin passenger on the ‘Trafalgar’ on an earlier voyage.

Dinner consists of mutton killed on board, or preserved meat, soup, sea pie, or fowls, and potatoes, with a pudding of raisins and almonds.  On Sunday the soup is replaced by pickled salmon.  The salmon is most excellent and so is the soup invariably, also the preserved provisions.  I own that I can't get over my disgust at the mutton and pork killed on board, though as good as can be, and the fowls (ducks and elderly hens) are frightfully scraggy.

There is also much to amuse one on shipboard ... at 4 o'clock in the morning the First Mate, Mr Draper, calls me, with others if I am inclined.  I then get up, putting on – pray, don't be shocked – nothing but that flannel-coloured dressing gown you chose for me, go forward to the bow of the vessel, and don't be shocked again, and heartily pumped upon by one of the jolly tars. [A washing down with cold water using a fire hose].

If not so inclined, we all rise at seven bells, half past seven, and after the usual toilet duties, assemble at breakfast....  After breakfast we adjourn to the quarter deck where I generally take a good long solitary walk for some miles I should think, and as soon as I am tired of this, I go forward to the bows, and seated upon the cat reader, watch the vessel plunging into, and rising over the waves – a grand sight truly....

This morning from the forecastle there was a great shout from the forecastle ‘there she blows’ and rushing on deck we saw two fine young whales jumping about close to the vessel.  They were about 20' long and of the finback description ....  The flying fish afford constant amusement ....

[At the back of the diary transcript is a letter written by Andrew James Pollock to his mother after his arrival in Adelaide, giving her the benefit of his experiences at sea, and advising her and his sisters on their travel plans].

I write this for the sole purpose of giving you directions as far as possible for your guidance on preparing for the voyage and your residence here.  First, as to the time when you should come out ...  By starting (at the latter part of July) you have less chance of being exposed to the fearful gales, prevalent at the Cape of Good Hope during Equinox ....  Earlier in the year you catch the winter south of the Cape, and the temperature in close latitudes is very severe – especially after experiencing a tropical and vertical sun. 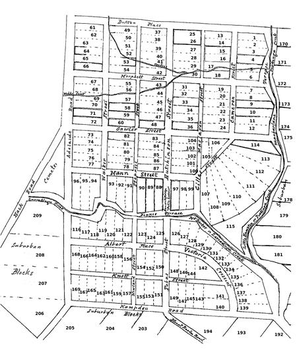 .... Don't take a stern cabin – you have no idea of the motion there compared with what is experienced near the door, in case of a wave coming in.  A water closet is indispensable for ladies.  The best plan is to get two smaller cabins made into one near the centre of the ship, and all three of you occupy that.  The berths should be lengthwise of the ship, and you should be with heads to the stern.  Over each at your feet should be a small bracket to contain a vessel in case of sickness, and your being unable to leave your beds...  Underneath the berths you should store your outfits and what you are likely to want, in galvanised cases.  These are invaluable as they keep everything from being mildewed ...   Those things that you do not want on the voyage, will go in the hold, but there put your clothes in galvanised boxes which have been soldered up, as they could be damaged otherwise by water...

See that all holes are stopped up in your cabin, also that under the door is close, for towards the end of the voyage, the rats are a great annoyance.  They don't hurt anyone, but they eat up your books etc.  Few ships are without them, and I have found them nesting under my feet upon awakening!  Also for this reason, you should have your port window fitted with a little piece of gauze wire, removable at pleasure, as the rats almost always come in at night through the port windows.

In South Australia Elizabeth bore another two children, a son, Albert in 1852 and a daughter (name unknown).  During a pregnancy, she died of apoplexy.  Apoplexy is unconsciousness or incapacity resulting from a cerebral haemorrhage or stroke.  At her death on 3 September 1855, her usual residence was recorded as Mount Barker.  She was just 44 years old.

According to a retrospective article in the local newspaper,7 ‘Mrs Champion sen.’ is buried in the old Mount Barker cemetery, which lies in the triangle on the map left.

Elizabeth's mother wrote Richard the following letter of condolence but by the time the letter arrived in Australia, Richard had remarried!  He married Sarah Musson on Christmas Eve 1855.7   -  [Transcript follows] 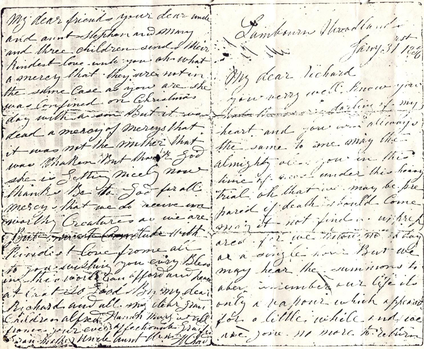 You very well know you had the very darling of my heart and you was always the same to me.  May the Almighty bless you in this time of need, under this heavy trial, oh that we may be prepared if death should come.  May it not find us unprepared, for we know not a day or a single hour, but we may hear the summons, to obey.  Remember our life it's only a vapour which appeareth for a little while and we are gone no more to return.

Grieve not for her, my dear Richard, your loss is her gain, she is landed safe above, she has traveled her journey through, she is gone from a world of care and sorrow, and sin unknown to her, while you are struggling on to gain and fight on as a good soldier of the Cross of Christ until the day when it shall be ended.  My dear Richard, my very dear Richard, I cannot tell your feelings, may the Almighty grant that you may send and tell me the very feelings of your heart and that the Almighty may bless your tender offspring now  He has been pleased to take from me and you my beloved child and your beloved wife.  He has promised to be a Friend to the Fatherless and the Widow, why should we not rely on him who is our all in all.  He is the same yesterday, today, and forever-more and changes not.

My dear Richard do not forget me, no never forget an aged mother, send often to me and I will return the same to you if it is the Lord's will and we may meet in a better country, meet to part no more is the sincere prayer of yours in the Lord. getting on nicely now.  Thanks be to God for all mercies that we do receive, unworthy creatures as we are.

My dear friends, your dear uncle and Aunt Stephen and Mary and three children send their kindest love unto you.  Oh what a mercy that they were not in the same case as you are, as she was confined on Christmas Day with a son but it was dead, a mercy of mercies that it was not the mother that was taken, but thank God that she is getting on nicely now.

But I must conclude with kindest love from all to you.  Wishing you every blessing this world can afford and peace at last.  So good-bye my dear Richard, and all my dear grandchildren, Alfred, Hannah, Margaret and all.

From your ever affectionate Grandfather, Grandmother, Uncle and Aunt William H Chad". 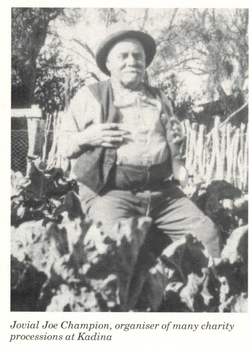 In 1872 the family moved to Kadina on the Yorke Peninsula where Richard’s son-in-law, William (Jabez) Dodd was working at the copper mines. 9  According to his death registration, Richard, a miner, died at New Jerusalem (a suburb of Kadina) on 30 December 1883 of Erysipelas (a serious bacterial infection affecting the skin).

Richard was an asthmatic and has been blamed for passing on this condition to many of his descendants.  Family stories also suggest that Richard ‘was rather adept at getting other people to do things for him.’  He had a ‘penchant for late night band practice’, and left Sarah at home.

A street in Jerusalem may have been named for his son, Joe.  According to Keith Bailey’s book, A Copper City Chronicle, Joe was a prime mover in the erection of the new Methodist church in Champion Street, Kadina.  He was a miner and former Salvationist who was keenly interested in helping others.  His charitable work both before and after the First World War saw the formation of the Champion Benefit Society which organised many concerts and processions to raise money for needy causes.

Joe’s son, Wesley was the inaugural bandmaster of the Kadina and Wallaroo Workers Brass Band (centre, left).  Plato said that ‘music gives soul to the universe, wings to the mind, flight to the imagination, and charm and gaiety to life and to everything’.  Keep playing your trumpet, Layne! 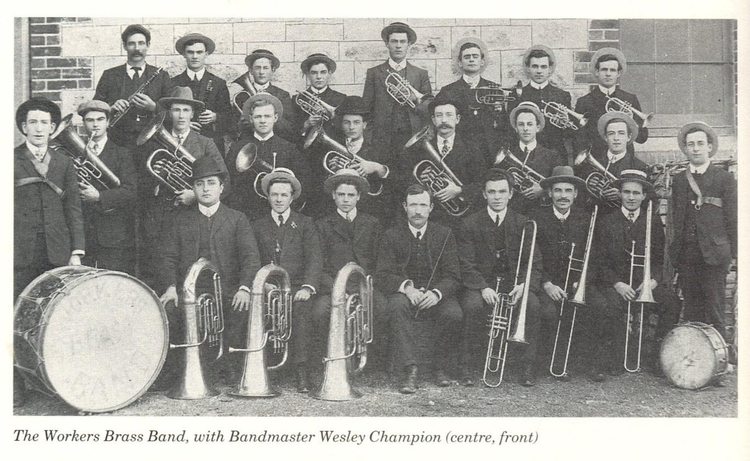 1  The entry for Elizabeth’s baptism on 5 May 1812 states ‘Elizabeth Gould, baseborn daughter of Hannah Cowley.’