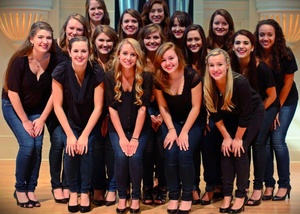 Taken by Juliette MacRostieSweet Signatures is Elon’s only all-female a capella group. It is made up of sixteen women who all share the same passion for singing. This group was established in 2001 and has since released four albums, “Time After Time” (2001), “Pitch Black” (2004), “Coming Into Focus” (2007), and “Love Affair” (2010). After releasing these albums, both “Love Affair” and “Coming Into Focus” were nominated for CARAs. For us not so musically inclined, CARA stands for Contemporary Acapella Recording Award. In addition, the group placed third overall, and won “Best Choreography” at 2009′s SoJam competition and 2008′s ICCAs. They have also received positive reviews from the a capella review board, and have been commended for their live performances. Their albums have also made it onto iTunes for the pleasure of the listener who can now buy their music and enjoy it whenever they please.

Sweet Signatures “makes it a priority to entertain the Elon student body”, says freshman Sweet Sig member, Maddy McDaniel. They hold concerts on campus and participated in Acapalooza, which was on the Elon campus this past spring in 2012. However, they also compete nationally and sing for hired events around the Burlington area. They are an extremely versatile group, with the common ground of their love for music.