Alamance County, established in 1849, was once primarily known for its rich agricultural landscape and the crops that sustained its residents and others nearby. Then in 1851 transportation became highly important with the first railroad being established in North Carolina in Greensboro, allowing Alamance residents to have access to the larger cities of Greensboro and Hillsborough. The final large industrial movement in Alamance County was then the installation of multiple textile mills along the Haw River.

Due to Alamance County’s location along the Haw River, it became a prime location for water-powered textile mills. Despite the wars and southern depression, Alamance County was able to remain alive due to these mills and its other industrial industries. With 14 mills built between 1834 and 1880 there were numerous new job opportunities. With new jobs being created more people moved into the area, and housing developments soon emerged in the Company Shops area (present day Burlington).  Thus with the rise of the textile mills, Alamance county received a great economic boost that allowed it to survive economic collapses and world wars.

One of the first mills that were created in Alamance County was the High Falls cotton mill.  Owned and operated mainly by the Trollinger family, the mill changed ownership multiple times since its opening in 1834. Soon after E.M. Holt and brother-in-law William Carrington, created the Alamance Cotton Factory in 1837 along Big Alamance Creek. This mill is responsible for the famed textile pattern named the Alamance Plaid, famous due to it being the first mill south of the Potomac to produce colored, factory dried cotton. In 1926 the mill changed ownership and then was mainly utilized for hosiery finishing until 1947, working under the new name of Standard Hosiery.

The Holt family was highly influential in the industrial side of Alamance County, especially once Carrington sold his interest to Holt. Holt then expanded the already large and lucrative business by connecting with the railroad companies in North Carolina, and shipping his textiles to the north. There, the Alamance Plaid was highly popular, and eventually gave the Holt Company a national reputation. During the civil war, Holt was able to continue making money by supplying the confederacy with textiles, avoiding the ruin that many other southern companies had to face. The Holt textile mills grew in number and for 89 years flourished, making the Holt name an Alamance County staple.

Despite the great success that textile mills found in Alamance County, beginning in the 1970’s, mills were closing at a quick pace. With these closures, Alamance County could not be the same due to how much the residents depended on the mills for employment. Mills had sponsored village schools, and organized recreational activities for employees, and without their support, the towns began to corrode along with the physical buildings. 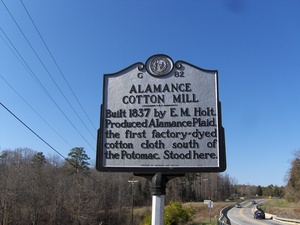 Today these empty textile mill buildings have various futures. Some are torn down, such as the once famed Lafayette Mill in 2007. Others are attempting to be preserved as museums, or simply for storage as is the case with Granite Mill. Still, some are to be repurposed into office spaces, condos, warehouses, libraries, or even medical centers, depending on what the town is in need of. While this is the most desired use of the mill spaces, owners are having trouble finding the money in today’s economy to re-work the slowly deprecating mills.

While Alamance County has a rich history in the textile industry, it is important that new technologies and businesses are created and brought in to keep it a thriving county. After all there is no time like the present. 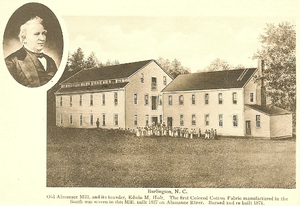