After spending 20 years working in corporate America, Robert Owens wanted to start and run his own business so he opened a coffee shop in Chapel Hill in the early 2000s. Four years later, he discovered his neighbor owned a wine shop, and Owens decided to look into the business. He worked for his neighbor’s wine store for a few years before feeling confident enough to open his own business, and in September 2009, the West Burlington Wine Company was founded. Owens decided Burlington would be the ideal location for a store like his because there are no other wine shops around.

The West Burlington Wine Company now carries 600 types of wine, and Owens is willing to order any wine that customers want but cannot find in the store. Additionally, he also carries an array of high quality beer.

On Fridays from 4:00-7:00 PM, Owens opens up the West Burlington Wine Company for beer and wine tastings. According to Owens, the tastings give the Burlington community the opportunity to try wine and beer they would not otherwise have the chance to try.

The West Burlington Wine Company can now be found at 1149 Saint Marks Church Road  Burlington, NC 27215 in the shopping complex with the Mathnasium and Piedmont Ale House. 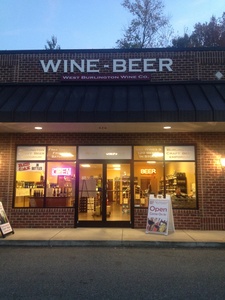