WSOE 89.3 is Elon University’s own radio station, hosted by different students on campus. Each show is unique in topics discussed such as Bonus Life Radio on Fridays from two PM to four PM, which is a talk show about video games and other technologies, or ELR: Elon Laugh Radio on Fridays from ten PM to eleven PM, which is a comedy show. There are also various sports shows such as The 14th Inning Stretch, which is on Thursdays from eight PM to nine PM.

With an eclectic variety of music and shows, WSOE 89.3 gives the Elon community a diverse taste of the music world and provides feedback of sporting events and other gatherings. 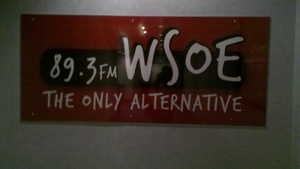 They also provide giveaways of free tickets to concerts and other musical events in the North Carolina area. If listening in, the station will provide information on the event and how to enter to win the prizes they are giving away and call 336-278-7211.

To listen to them live on the air go to http://wsoeelon.com .WSOE, The Only Alternative.