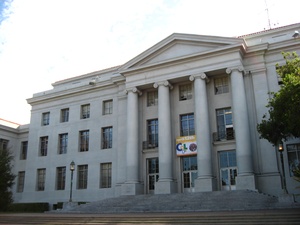 Sproul Hall is the main administration building for Students at the University. It is also the backdrop for Sproul Plaza, the site of many a protest, demonstration, speech, rally, concert, or other unspecified student activism. The most notable speech given from the steps of Sproul Hall is perhaps Mario Savio's 1964 rally protesting the university's bureaucracy.

There is a Sproul Hall on each campus of the University of California system.