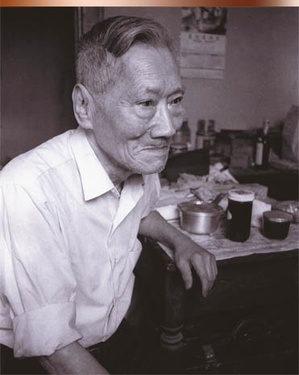 At one time Boise had a thriving Chinatown district.  Billy Fong was a part of that community.  He arrived in Boise in the 1940s and joined the Hop Sing Tong.[1]  Membership in the Tong meant protection, access to work, and a place in the community.  Billy eventually became more than just a member and held several administrative positions for the Tong throughout the years.  By the late 1960s the Chinese population dwindled as did membership in the Tongs.  The Tongs could no longer afford to maintain their buildings and decay set it.  The City of Boise began to look at the downtown area as misused space.  They started a campaign of redevelopment and renewal, and using Federal funds, the city began purchase and tear down the old Chinese buildings.  For over thirty years Billy had been a cook at the Golden Wok and lived in a small apartment on the second floor of the Hop Sing Tong building at 706 ¼ Front Street.[2]  In the early 1970s, the Boise Redevelopment Agency (BRA) bought his building and slated it for destruction.  At the age of 84, Billy became an unlikely dissident as he fought the BRA.  They were determined to remove him from his home and Billy was determined to stay.  By 1972 he became the last living resident of Boise’s Chinatown.  After months of refusing to leave, and with a wrecking ball sitting outside his window, Billy finally gave in and abandoned his longtime home.[3]  The Hop Sing Tong building was destroyed, but Billy had the last laugh.  According to legend as he left he cursed the area; a curse so powerful that it caused all redevelopment plans to fall through.  Some say that curse lives to this day and is the reason the Boise Hole has existed for the past twenty years.[4]