The closest shopping and restaurants are in Plantation Shopping Center at the southwest corner, approximately a 30 minute walk from the northwest corner due to limited diagonal walking routes. Buses 9, 9x, and 10 connect the neighborhood to downtown, the downtown transit hub, and Boise Towne Square. Access to the Greenbelt is limited due to the private Plantation Golf Course, but can be obtained by traveling west or east on State Street to bypass the course. 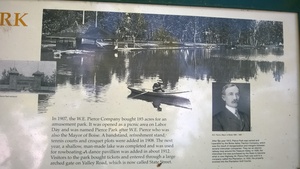 Pierce Park's namesake, a park, was located where Plantation Golf Course is now. The park existed from 1907 to 1928. It was originally a picnicking park until amusements were added such as an artificial lake for rowboating, a dance pavilion, a bandstand, tennis courts, croquet plots and a refreshment stand. The park was named after W.E. Pierce a land developer, president of the Boise & Interurban Railroad (on which one could ride the 6 miles west from Boise City to the park), builder of the Hotel Boise, and who served as Boise's Mayor. The park entrance was a large archway on Valley Road (now State Street) where visitors paid an all-inclusive fee to enter the fenced grounds. Ownership of the park changed hands and was eventually owned by Idaho Power and then the Plantation Company who started the golf course.

Information for this article came from History Along the Greenbelt by Jim Witherell and Boise: An Illustrated History by Merle Wells. See also City History