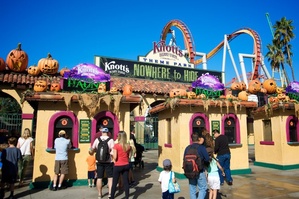 Knott's Berry Farm was established circa 1920 in Buena Park, CA off of Highway 39, now known as Beach Boulevard.  What started off as a humble berry farm owned by Walter Knott, soon grew into a family owned Amusement Park pre-dating its well known neighbor, Disneyland. In order to gain some extra income, Knott's wife, Cordelia, would prepare and sell her homemade fried chicken. Surprisingly, her fried chicken drew large crowds and become a staple in the community. 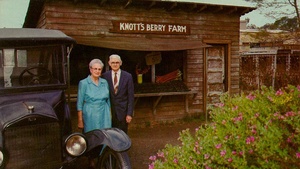 In order to satisfy the customers waiting in long lines, Walter Knott began to find ways to entertain them during this time. This would eventually include a replica of California's Calico Ghost Town. Some building's from Knott's Calico Ghost Town were moved as a whole to Buena Park. As popularity grew, the family started charging an admission fee, thus becoming America's very first Theme Park.

As time went on more attractions were added such as rides, that of which would inspire local legend Walt Disney to create his own animatronic attractions, leading him to open up Disneyland.  Eventually more shops were opened along Beach Blvd. In fact, Mrs. Knott's kitchen still serves a full house every single day and is now known as Mrs. Knott's Chicken Dinner Restaurant. 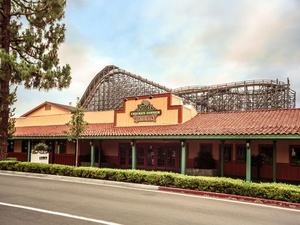 Today, Knott's is mostly known for being the very first place to hold an annual "haunting" with their Halloween Haunt, or Knott's Scary Farm. Knott's Halloween Haunt brings hundreds of thousands of guests every single year and inspired hundreds of more events at theme parks across the country.

Now the epicenter of Buena Park, Beach Boulevard is home to some of the city's biggest tourist attractions including Medieval Times, Pirates Dinner Adventure and much more. Knott's Berry Farm is located just minutes from the Dinseyland Resort in Anaheim.