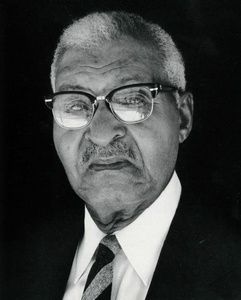 A grandson of a Civil War veteran, Spenser Rivers, Allen Rivers came to live in Champaign from Cairo, Illinois, in 1919.  He lived with his with two aunts Callie  and Pearl Marshall who along with his grandmother Sarah Rivers, helped raise him after his mother died. Retired school teachers, Callie and Pearl opened a beauty shop in Champaign.  About 1923 he married Clydia Mae Simpson of Champaign and would have 5 children: Charles, Dorothy, Betty, Allen Jr. and Richard.  In 1935, Mr. Rivers became the first Black police officer in Champaign. "I made $140.00 a month when I started, then $150.00 after a six-month probation," he recalls. "That was a lot of money then." He says he had no difficulty getting the job. "I applied, passed the exam, and was hired." He remained with the force until his retirement in 1960.  After his first wife died he married Jazz pianist Ellen Treadwell of Danville, Illinois in 1952. Among his grandchildren is Angela Rivers.  The family lived at 405 1/2 East Park Street. A portion of Park Street was declared Honorary Allen Rivers Street in his name in 2009.