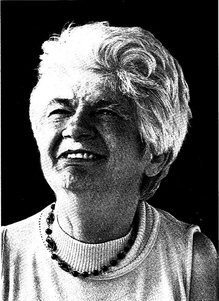 Barb Baggerly was born June 25,1919, in Chatham, Illinois. For many years she worked as a waitress at various restaurants in the Springfield area in order to support her three children. She also worked in a factory during World War II. She most strongly recalls raising her children, "being a single parent when being one was not commonplace." She has six grandchildren "ranging in age from 26 years old to 21/2 years old," she said in a 1984 interview. Although unable to do much physically in the early 1980s, she still enjoyed music and maintained a sense of humor. Understandably her primary concern was her health. However, she said that
while "the outside person has changed, the inside person is pretty much the same."