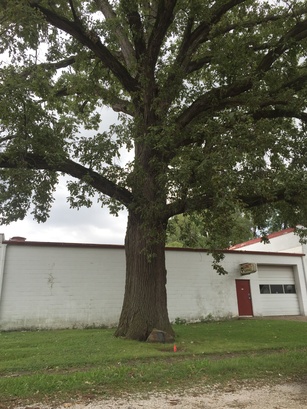 The bicentennial bur oak next to Long's garage, September 2016Big Grove was precisely that - a large stand of trees that occupied much of the area that is now Urbana, Champaign and their environs. In the years before Champaign county was created and the town of Urbana was named, the stand of trees lent its name to the region, which was referred to as Big Grove by early settlers. Although central Illinois was largely prairie, the prairie was dotted by stands of trees. Big Grove stood out as one of the largest of those stands, at least in this region of Illinois. An 1821 survey of the area shows Big Grove occupying roughly ten square miles of what is now northern Urbana, including what is now Busey Woods. The grove 's southern boundary was near modern Main Street, and the western boundary ran parallel to the Saline Branch, near Lincoln Ave.

The woods were composed largely of oak trees, interspersed with hickory, ash, walnut, sugar maple, and linden trees.  Although the vast majority of the original trees have been cut and used for lumber as the area was settled and the railways were built, some may still stand in Urbana and in forest preserves in the region. Here are some you can visit today: 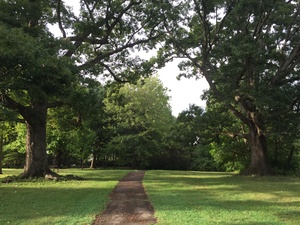 This work by Margaret Buck is licensed under a Creative Commons Attribution-NonCommercial-ShareAlike 4.0 International License.