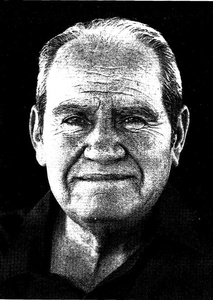 Born in Cooksville, Illinois, in 1913, Mr. Heath came to Champaign after completing his college education. He started working in a funeral home at age 17 in Saybrook, Illinois. He also worked in Normal, Moline, and Streator before opening his own funeral home in Edinburg, Illinois, in 1940. In 1946 he opened a new funeral home in Champaign, building the business by himself. In 1965 he named his sons as partners. He was also elected Champaign County Coroner in 1964, 1968, and 1972. In 1972 he was also president of the Illinois Coroner's Association. In 1975 he took medical disability from his position as coroner due to a stroke. Recently, he was honored by the Illinois Funeral Director's Association for being a licensed funeral director for over 50 years. He was the first county chairman of the Heart Fund and was actively involved in a number of civic and fraternal organizations. He said in a 1984 interview, "I'm proud of the things that I accomplished."