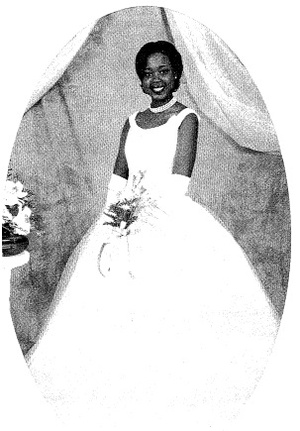 Dionne Clifton is the daughter of Dora Pope and Walter Clifton. She attended Urbana High School where she was a member of the Orchestra, the Director's Advisory Committee, the cheerleading squad, and the Tennis Team. Dionne was also a member of the French Club, the African-American Club, the school newspaper, the Echo, the Speech team, and was Activity Chairman for the Student Senate. She attended the University of Illinois. Dionne attended Greater Holy Temple Church, where she sang in the choir, was a member of the Usher Board, and Sunday school. She was awarded Student of the Month as well as the recipient of the Student Senator of the Year award at Urbana High School. Dionne was also honored with an appointment to the Congressional Youth Leadership Conference. Her escort at the 1999 Gamma Upsilon Psi Cotillion Ball, where she was a debutante, was Al Harris. Dionne was presented at the ball by her cousin, Marcel Clifton and was received by her mother, Dora.