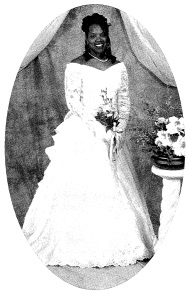 LaToya is the daughter of Carroll D. Sutherland, the late Russell E. Pratt and the stepdaughter of the late Garry G. Sutherland. She attended Champaign Centennial High School where she was a member of the Future Teachers of America Club, the Principle's Scholars Program, and the Spanish Honor Society. LaToya is treasurer of Law Explorers, Vice-President of African-American Club, Vice-President of Delteens, a member of Partnership For Excellence, Cheerleading squad, Lancers, and Honor Roll. Debutante LaToya has been accepted at Spelman College in Atlanta, Georgia and will major in Sociology and minor in Spanish. She is a member of Mount Olive Baptist Church where she is active in the Youth Choir, Inspirational Choir, Sunday school, Baptist Youth Fellowship and was a delegate to Illinois Baptist General State Congress. LaToya received an Academic Letter (freshman year), was named Centennial High School Student of the Month, was a recipient of the Academic Achievement Award from the Graduate Chapter of Delta Sigma Theta, Inc. She was employed by Karmelcorn. Her escort was Cartice Wilson. LaToya was presented by her grandfather, Walter Willis and received by her mother, Carroll.