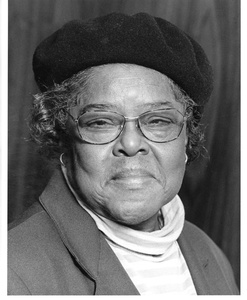 Maudie Edwards was born at Pulaski, Illinois. She says "I attended school and college (SIU) in southern Illinois. I taught school in southern Illinois and completed my teaching years in Champaign. My number one hobby is sewing. I owe my great love for sewing to my mother. To me, she was the best seamstress in the world. I designed the pattern, pieced, and quilted this quilt. Years ago I decided to make it, finish it before retirement, and have my co-workers at school each sign a door or window of one of the schools. My oldest sister promised to quilt my quilt for me, but became ill. I decided to try quilting. I knew nothing about lining, padding, or quilting. It is not a professional finish, but 'I did it myself." She was featured in the Covering our Heritage: African-American Quilts of Champaign-Urbana exhibit held at Krannert Art Museum in 1994.

Maudie had six brothers and sisters. Her father worked for the Illinois Central Railroad. Her mother was a homemaker, seamstress and gardener. Maudie attended elementary school in Pulaski. She took a bus to Mounds for four years of high school and spent summers working in St. Louis, MO, earning money to buy the things eeded for high school. Because her parents felt they would be unable to send her to college, Maudie promised if they would help her get into college, she would do the rest. She worked and sang in the Rolland Hayes Choir to pay her tuition. Maudie attended southern Illinois University at Carbondale two years and received a two year teacher's certificate. She continued with summer and night classes to complete her bachelor's and master's degrees. She enjoyed going to college and although she had almost earned enough hours for a PhD, her desire to teach took her to the classroom. Her first teaching assignment was in a one room schoolhouse at Olmstead. The next assignment was to teach first and second grade in Mound City and eight years later in Ullin. In 1959, Maudie came to Champaign as a first grade teacher. She retired from the Champaign schools system in 1984 but continued to share her love for education as a volunteer. Maudie was not only dedicated to teaching and helping young children but to learning as well. She traveled to Hawaii, Alaska, Australia, Singapore, China, Japan, Africa and every state in the United States. She had a great love for the fine arts. After church (Christian Methodist Episcopal), Krannert Center for the Performing Arts was a favorite place for Maudie.

Read Maudie Edwards describe her life in a 1999 issue of Through the Years.