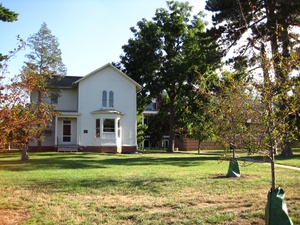 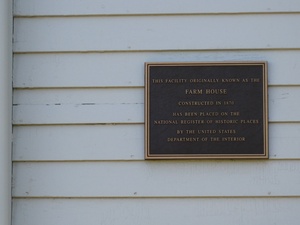 Plaque on the Mumford House, fall 2011

Mumford House is the oldest structure still standing on the University of Illinois at Urbana-Champaign's campus. It was constructed in 1870 as a model farmhouse, a learning tool for the School of Agriculture (as such, it was part of their then-experimental "South Farms"), but over the years has also served as a home for several deans and other faculty members; today it carries the name of one such administrator, Herbert W. Mumford, dean of the School of Agriculture.1 Its architect was J.S. Searfross, whose design was meant to represent a typical regional farmhouse.2 The Mumford House served the University faithfully through the mid 1990s. By then, the Deans who had once resided in it had long since moved away, and rather than housing families the Mumford House provided a home for faculty offices.

After the faculty offices moved to other housing in the 1990s, the Mumford House fell into silence and disuse. For a time, beginning around 2008, there was considerable discussion around the possibility of the moving the House from its original location to a different spot, several miles away; however, in 2009, the Board decided against this possibility, opting to leave the House in its space for future generations. In 2010 the House underwent emergency stabilization work, an attempt to preserve not just its location but the house itself for the future. There are plans to potentially renovate the House, using it as part of a mission to integrate ecologically friendly and sustainable earth education into the University and its mission3; however, the stabilization project remains the only work to have been completed as of 2013.

Today, in 2013, the Mumford House continues to stand alone in the shadow of Temple Buell Hall and the McFarland Bell Tower, silent witness to well more than a century of the University's history.

Location of Mumford House (or, how to find it when you want to show it off)

Mumford House sits by itself in a small landscaped area in the South Quad, to the north of Temple Buell Hall; it is in the shadow of the McFarland Bell Tower. It is near Krannert Art Museum and Kinkead Pavilion and is a short walk from the Main Library.