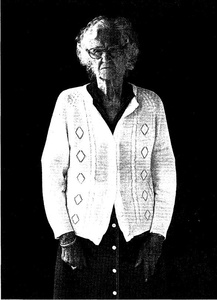 Mrs. Bartlow was born in Effingham, Illinois, in 1900. She lived in Champaign County since 1919, except for a few years when they lived on their farm in Vermilion Co. In their later years, she and her husband vacationed annually in Missouri and Minnesota. "I've tomcatted around a lot. I've had hot feet," she said in 1984. A housewife and a mother, she and her husband raised five children (three girls and two boys). "They're all grown now, on their own, with their own families. I like to do anything, but work," she kids. Nonetheless she recalls, "I canned a lot and worked in the garden. I worked hard." Mrs. Bartlow also taught herself to play the piano, guitar, and violin.