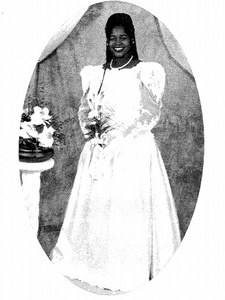 Sherrika is the daughter of Pamela Ellison.  She attended  Urbana  High  School  where she was  a  member  of the Student  Senate,  the African-American and  Spanish  Clubs. Sherrika  was  also  a  trained  peer  mediator  in  the  Conflict Mediation Program, a member of Upward Bound, the Spanish Honors Society,  the  Partnership  for  Excellence  and  the Principal's  Scholar's Programs.  She was  on the  cheerleading squad,  was  a  member  of  the Tigerettes Pom Pon squad,  Delteens, the Tri-M Music Honors Society, and the Honors Choir. Sherrika planned to attend the University of Illinois after graduation and to major in Sociology and Pre-Medicine.  She was a member of the Church of the Living God,  where she sang in the Teen Choir,  and was a member of the Sunday school,  and I Youth  Class.  She  was  a  recipient  of many  scholarships and awards: the Martin Luther King Jr. Scholarship Award,  the Delta  Sigma Theta  Academic  Achievement  Award,  the  Upward  Bound  Student  of  the  Summer  Award,  the  Big  12 Scholars Athletic Award and Young Authors Award.  Sherrika earned an  Academic Letter for Academic Achievement,  and was  on the Honor Roll.  She was  employed  at the County  Seat. Her escort was Kelsie Jackson. Sherrika was presented by her uncle,  Anthony Sibley  and received by her mother, Pamela.