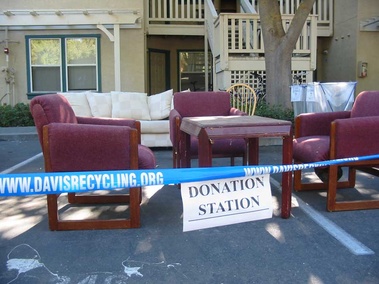 Donation stations are set up at participating apartment properties for residents to leave good, usable items for reuse.

This program is no longer in operation.

The Apartment Move-Out Waste Reduction Program (AMOWRP) was a partnership between the City of Davis (Public Works Department) Recycling Program and property managers at large apartment communities in Davis. It was an effort to reduce the amount of good, usable material that typically ends up in the landfill during the yearly August move-out. The State of California requires all cities to divert 50% of their waste from the landfill. In order to maintain that goal, we need to recycle as much material as possible, and reduce the amount of material going to the landfill.

How does the program work?

Step 1: City Recycling Program staff invited managers of large apartment properties to participate in the AMOWRP. Interested managers sign up for the program.

Step 2: City program staff would supply the participating managers with a flier for their residents and posters advertising the program. Managers pass out the fliers to their residents and hang up the posters in a common area so that residents will know about the event.

Step 3: When the program began (usually the second to last week of August), City Recycling Program staff would mark off the donation station (usually the area next to the dumpsters) with blue recycling “caution” tape and signs. Blue frames with bags and signs were set up to collect donated clothing (the #1 donated item year after year!).

Why should apartment properties participate?

Properties that participated in the 2008 AMOWRP saw a 40% reduction in waste during move-out, as compared to the amount of waste produced in 2007. This resulted in immediate savings for many. Residents and apartment staff that have participated in the past felt the pride and satisfaction of “doing the right thing” and wasting less. Local non-profits benefit from the items they receive from the Move-Out Program (in 2008, 10 different local non-profits were involved with the program). The program generally reduced the amount of mess and litter that occurs during the yearly move-out, and usable items and recyclables are kept out of the landfill. Residents also benefited from taking their pick of the free items that are left in the donation station. For some, it was a free way to furnish their new home!

The main goal of the AMOWRP was to keep good, usable material out of the landfill. If all of the bed frames, computer desks, sofas, lamps, clothes, etc. are not thrown away, but donated and reused—apartment managers should see a reduction in their disposal fees because the dumpsters will not fill up as fast, necessitating fewer pickups and saving on disposal cost. As mentioned above, in 2008, despite the large number of move-outs (many properties were experiencing a 50% turnover rate) and apartment renovation projects contributing to the amount of waste generated, participating apartment communities saw a 40% reduction in waste during move-out. It just makes sense—if things are being donated and reused, then there is not as much to throw in the trash.

Is there any fee for apartment properties to participate? 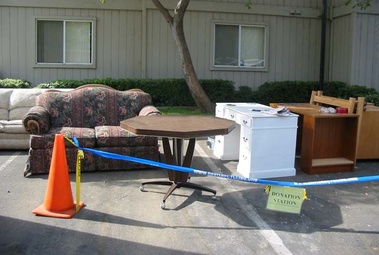 No, there was no fee. The City Recycling Program only asked for help and cooperation with this project. There are over 100 apartment properties in Davis with 10,000+ units. While the City  recruited volunteers to assist with the move-out program, the City did not have the resources or staff to be on-site supervising each donation station 24/7. The City needed the help of the property managers and their maintenance staff in order for this program to work. The City could create fliers for apartment residents, but needed the help of property managers to copy and distribute the fliers among their residents. Equally important, property managers were asked to verbally encourage their residents to participate in the program by bringing good items to the donation station instead of throwing them away. The support of the maintenance staff was also important to be sure those good items left outside the dumpsters were not thrown in the trash, but were moved into the donation station. Maintenance staff were also needed to help keep the area around the donation station tidy. City recycling staff and volunteers would be by to help tidy up and sort through the material that is donated, but help from maintenance staff was also important to keep the area clean.

How do the donated items get to the charities and non-profits?

The City Recycling Program gave the interested charities and non-profits a list of all participating properties. Some would stop by the donation stations and take the items they want. Some volunteers will have “wish lists” from local non-profits and will collect and deliver items from the wish lists.

How can I help?

This program (when it ran) relied on the assistance of volunteers. This program is no longer in operation.

The program did not run in 2020 and 2021 due to the COVID-19 pandemic. In 2022, the City started a new outreach program that aimed to reach all rental properties (not just large apartments) and tenants, both in single-family and multi-family housing. The previous program, while successful, was limited in scope. Only a handful of apartments benefited from the program and there was little to no outreach to single-family rental properties.

Although the City no longer sets up donation stations, properties can choose to set them up themselves.

2009-06-17 13:28:37   this is actually a decent idea, iirc they put huge dumpsters around all the garbage cans at complexes to facilitate throwing away stuff during turnover, however they have the donation side roped off, and I've heard stories of people (be it city employees, or people working for charities) claiming the stuff left is the property of whatever this program, and to take it is theft! kinda suspect —StevenDaubert

2010-07-13 08:13:59   The goal of the program is reuse, so taking stuff actually helps. Just don't take the traffic cones and clothing collection containers at the donation stations—those are City property. Residents and staff at the apartments are encouraged to take what they want from their donation stations. Although reuse and recycling is encouraged, the City cannot invite the general public to come to the donation stations as they are set up on private property. Most local residents already know about the “move-out madness” in Davis, and have seen all the furniture that is left behind every year. As a result, many people have made a habit of driving around the city from property to property gathering up furniture and other items. Please be aware that scavenging through dumpsters to find usable items can create a big mess and create more work for maintenance staff trying to stack things carefully into the dumpsters to save space. Please tidy up a bit when you're done looking for treasures.