BASED is a slate comprised of 6 progressive ASUCD Senators. The members of BASED are based in their communities and draw from a wide array of experiences and individuals to contribute to their choices in student representation. 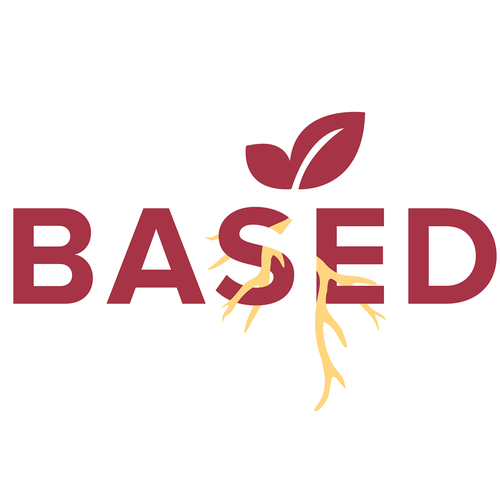 BASED first ran in the Fall of 2015, winning three seats through Adilla Jamaludin, Georgia Savage, and Parteek Singh, with Josh Dalavai (formerly an Independent) joining after elections had ended, resulting in a total of four out of six seats. Unlike previous dominant slates (of which based now is, previously dominant), BASED has no (public) official ranking within their members and no (public) party leaders. This is to maintain their core values of community and equal representation.

Some BASED senator highlights:

The follow are the the candidates that BASED ran during each election cycle. Bolded indicates won a seat.

BASED ran 7 candidates for the 6 spot available on the Senate table.

4 out of their 7 Senate candidates won a seat on Senate. 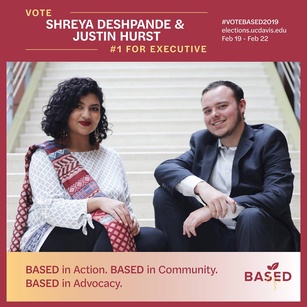 The Senate Candidates are Peiyuan (Tony) Chen and Alexis Ramirez. There were 8 senate candidates running in total.

Both candidates were seated. 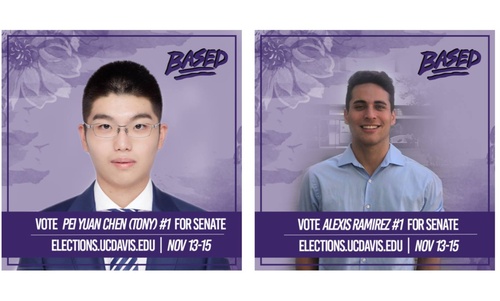 In the presidential election, The Jung/Correa ticket received 990 out of the 2551 votes cast; losing to the UNITE!'s Gofman/Branson ticket 41% to 38%.

The candidates (from left to right) were Sevan Nahabedian, Sam Chiang, Ricardo Martinez, Ryan Abusaa, Shaitaj Dhaliwal, and Ayman Shehadeh. Three of the six candidates were seated, with the other three ranking #7, #9, and #12 out of 19. BASED received 1856 of 4441 number one votes, the most of the three slates in the election.

The candidates (from left to right) were Georgia Savage, Adilla Jamaludin, Parteek Singh, Jacqueline Obeid, and Lynn Ayala. Three of the five candidates were seated, with the other two ranking #7 and #10 out of 17. BASED received 1039 out of 2609 number one votes, the most of any slate running in the election, but trailing behind the aggregate total of independent number one votes.