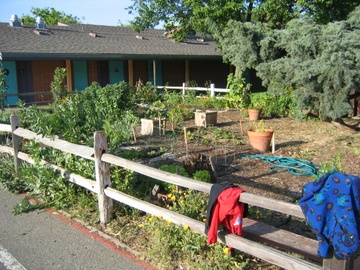 One of two small gardens on school grounds

Cesar Chavez Elementary School is an elementary school in the Davis Joint Unified School District. The school is adjacent to Redwood Park, where the students frequently play. Construction of the building was completed in October of 1954.

It is the main campus for the district's Spanish Immersion program, where all classes are taught in Spanish. Previously, the Spanish Immersion was located at North Davis Elementary School, among other schools.

This school used to be known as West Davis Elementary (WDE) but is now named to honor Cesar Chavez.

2008-10-21 13:05:39   I used to live near here, there was always kid's lunch-boxes and sweaters sitting around. This used to be a great place for water-gun fights. —ChrisWaterstraat

2011-08-05 15:54:01   Went to school here from K to 3rd grade ('79 - '82?). Great memories, particularly from "The Bee Hive" (for the W.D.E. "Busy Bees"), a play structure on the North side of the school, where the existing play structure is today. Of course, instead of the safe, molded plastic with forgiving cushioning on the ground, the "Bee Hive" was a triangular, sort of "Ski Villa" shaped 2 story wooden behemoth, with a pole and slide to come down. It of course would give you splinters just by looking at the thing... that aside, us kids thought it was just awesome. Even on the brightest days it was very dark inside, so multiple spiders loved living in (and underneath) the structure. Kids also would periodically fall (or jump) off the top story and land into the (largely unforgiving) wood chips below. The thing would be such a liability these days, it's crazy... but it'll be remembered by any/all of us who spent our entire recess most days playing tag in and around the Bee Hive. —OldDavis73