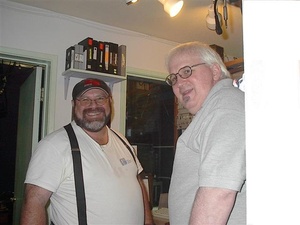 Cliff is the man on the left, Mike Duffey is on the right. This picture was taken in Octoberof 2004 in the control room of Davis Community Television. Cliff Gamble is the producer of Nexus Stage, a live music program that airs live every Saturday night from 6-8 pm on channel 15. The show is taped in the DCTV studio and some pretty cool bands have participated.

When bands are not available, Cliff usually airs a tape from previous shows.

Mike is Davis' resident expert on government mind control so if you have any questions about that subject, I suggest you ask him.

In addition to producing Nexus Stage, Cliff is also responsible for taping many of the local high school sporting events, like high school basketball games. He recently started working for WAVE TV, Woodland's public access station. Cliff is very enthusiastic, energetic and passionate about music. When I first started crewing on Nexus Stage last year, he and a bunch of friends (men their 40's and 50's) would sometimes jam when there weren't any bands. In fact, Cliff set devoted the second and fourth Saturday of each month to their jam sessions in the DCTV studio.

One of the most notorious episodes of Frank Dogg's Dog House that Cliff helped to produce, happened a few years ago when a band from San Francisco caused a minor uproar when a dancer they brought with them, took their top off on live television. Apparently, an offended viewer called the cops. From what I've heard, no major actions were taken against DCTV or Nexus Stage but no tape was made of that performance.

In the past year, it appears that interest in Nexus Stage has died down a bit and Cliff has toyed with the idea of taking Nexus Stage on the road, i.e. taping shows at venues inside/outside Davis. However, interest has not completely died and for the next two weeks, there shall be bands on Nexus Stage.

I don't know much about Cliff's personal life, other than the fact that he is retired from the California Department of Education, and has an ex-wife and two sons. He also rides a pretty cool motorcycle and owns some colorful hawaiin print shirts.

Last year when my life was in a complete rut, crewing on Nexus Stage helped me retain some sanity. I've met some interesting people at that studio on Saturday nights and I will miss the program when I eventually leave Davis.