The Davis Friends Meeting is attended by Friends or Quakers.

Quakers follow a pacifist religion. They believe that "there is that of God in everyone" and that divine guidance can come to anyone. Quakers seek the will of the Spirit directly, as a community and as individuals in a group setting. In unprogrammed Quaker Meetings, there are no professional spiritual leaders (such as pastors or priests) but instead all Members and attenders are considered to be ministers (i.e., able to deliver ministry during Worship) and the business of each group is conducted at a "Monthly Meeting" — hence the formal name of this local group is Davis Monthly Meeting of the Religious Society of Friends. Other names used include: Davis Friends, Quaker Meeting in Davis, and Davis Quaker Meeting. The term quaker was originally a derogatory term applied to the first Quakers in the 17th century, though it has long since been accepted by Quakers and is no longer considered in any way offensive.

There are many branches of Quakerism, ranging from a form of evangelical Christianity to others following a universalist faith tradition. The main distinction in California is between 'pastoral' Friends Churches and 'unprogrammed' Friends Meetings. Davis Friends Meeting is in the latter category, and statements on this page apply only to this branch of Quakerism. However, all Quakers share a common history which is reflected in interesting and unique ways in the different forms of Quakerism.

Quakerism disavows most outward rituals and external sacraments. Instead they strive for internal communion with the divine. "All aspects of life are sacramental; do not differentiate between the secular and the religious. No one day or one place or one activity is any more spiritual than any other." (from ''Beliefs and practices of the Religious Society of Friends (Quakers)'')

Quaker Meeting for Worship occurs on Sundays (which Friends call "Firstday"). Meeting for Worship is largely a silent, communal affair. People gather in one room, and sit together in silence. Individuals use various techniques to become calm and centered, and speaking to attenders yields diverse explanations of the activities they have undertaken during the silence. Many refer to prayer, listening for God's voice, opening, or "waiting upon the Lord". Commonly, one might 'get' an answer to one's own question/problem/challenge during Meeting for Worship; and one does not speak. If someone feels that what they have just gotten was intended to be shared, they are said to be "led to speak" (or "offer vocal ministry" or "pass along a message"). One then does so, sharing a brief message with the group. Sometimes, a full hour of worship will go by with no messages, but it can still be a spiritually fulfilling experience for the gathered community. Other times, several messages will be given.

While Quakerism has no established creed that all Quakers are expected to believe or follow, there is a common belief in the existence of one God (also called Spirit or Light) and 'ongoing revelation' — the expectation that each person is capable of direct communication with it/him/her. Quakers say: "Speak to that of God in every person," and hold that all people should be treated with dignity.

"Testimonies" are values historically held and practiced by Quakers.

The most well-known is the Peace Testimony. Most Friends hold that violence is never justified. This testimony arose during the 17th century, and is most commonly expressed in this quote: "We utterly deny all outward wars and strife and fightings with outward weapons, for any end or under any pretence whatsoever. And this is our testimony to the whole world." (from A Declaration from the harmless and innocent people of God, called Quakers, 1660) 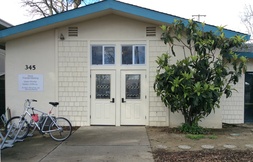 Quakers also have a Testimony of Simplicity. Being showy and flashy both obscures the presence of God within and detracts from the real and important work of changing the world. During one historical period, Quakers intentionally wore "plain dress" as a way of reminding themselves of this. Most modern Quakers simply try to waste less, consume less, and reuse what they can. Taking a look at the picture above of the Davis Meetinghouse gives you a sense of their aversion to ostentation. This is no fancy church with mighty architecture to symbolize God's power... this is a simple house of reflection, and of social action.

Other Testimonies include: Integrity; Equality; Community; and Harmony with Nature.

Friends routinely practice these common values by their strong involvement in peace and civil rights movements. Many Friends are, individually and collectively, committed social activists. Quaker grandmothers have been known to get arrested for protesting on government lawns. They are rabble rousers, just peaceful ones. The American Friends Service Committee is an affiliated organization.

"Unprogrammed" Quakers, the sort found in Davis, do not generally proselytize. Quakerism tends to attract seekers through either its stance on social justice issues or on theological issues. Most contemporary Friends in California were not born into Friends' families, but found their way to Quakerism on their own and became "convinced" that this is their home.

The non-hierarchical structure of this religion is one of its most unusual attributes. And one of the things that got Quakers into lots of trouble with the establishment during their beginnings in England. The founders took literally the scripture quoting Christ as saying: "Wherever three or more of you is gathered, there also am I." They held Meetings in homes, public squares, along roads — anywhere that a few 'Friends of Jesus Christ' could meet each other. With no pope, priest, or human overseer; the structure of these early churches was fluid and organic. To this day, individual membership is held within the small local unit — a Monthly Meeting — with larger gathering having no authority to impose doctrine or personnel upon the smaller group. Meetings are named according to their frequency of "doing business" with larger bodies being collections of smaller bodies — local = Davis Monthly Meeting; northern California = College Park Quarterly Meeting; regional = Pacific Yearly Meeting (PYM). Quakers also create larger bodies do things impossible for a small group to do, such as publish the magazine ''Friends Bulletin'', or for social interactions with distant Friends, such as Friends General Conference Gatherings.

With Quakers' assumption that there is one Truth/God/Light/Spirit, and with the belief that anyone can be a conduit for inspiration, a Business Meeting (aka "Meeting for Worship on the occasion of Business") is a unique experience. Sometime mistaken for "consensus", Quaker "unity" has at its core following the leading of the Spirit to resolve differences. "Unity" is said to be reached when all inspirations, ideas, suggestions, comments, and reflections have come together and the person Clerking that meeting can articulate a Minute of action to which all Friends present can agree. Each Friend is responsible for sharing any inspirations or insights they may have in the discussion; and for later helping to implement the decision Minuted by the group.

The current way Meetings in California operate is described in PYM's ''Book of Faith and Practice''.

From their former website:  Davis Friends Meeting is an un-programmed Meeting — that is, we gather in silence to worship and verbal ministry only happens if one of us is led to speak at that time. Although our worship is un-programmed, we do have set times to start, some regularly scheduled events, and some habitual activities.

Quakers are a rare breed.

Davis Friends Meeting is a warm and wonderful little meeting. Go visit them sometime, they are very welcoming, and always have a little snack afterwards.